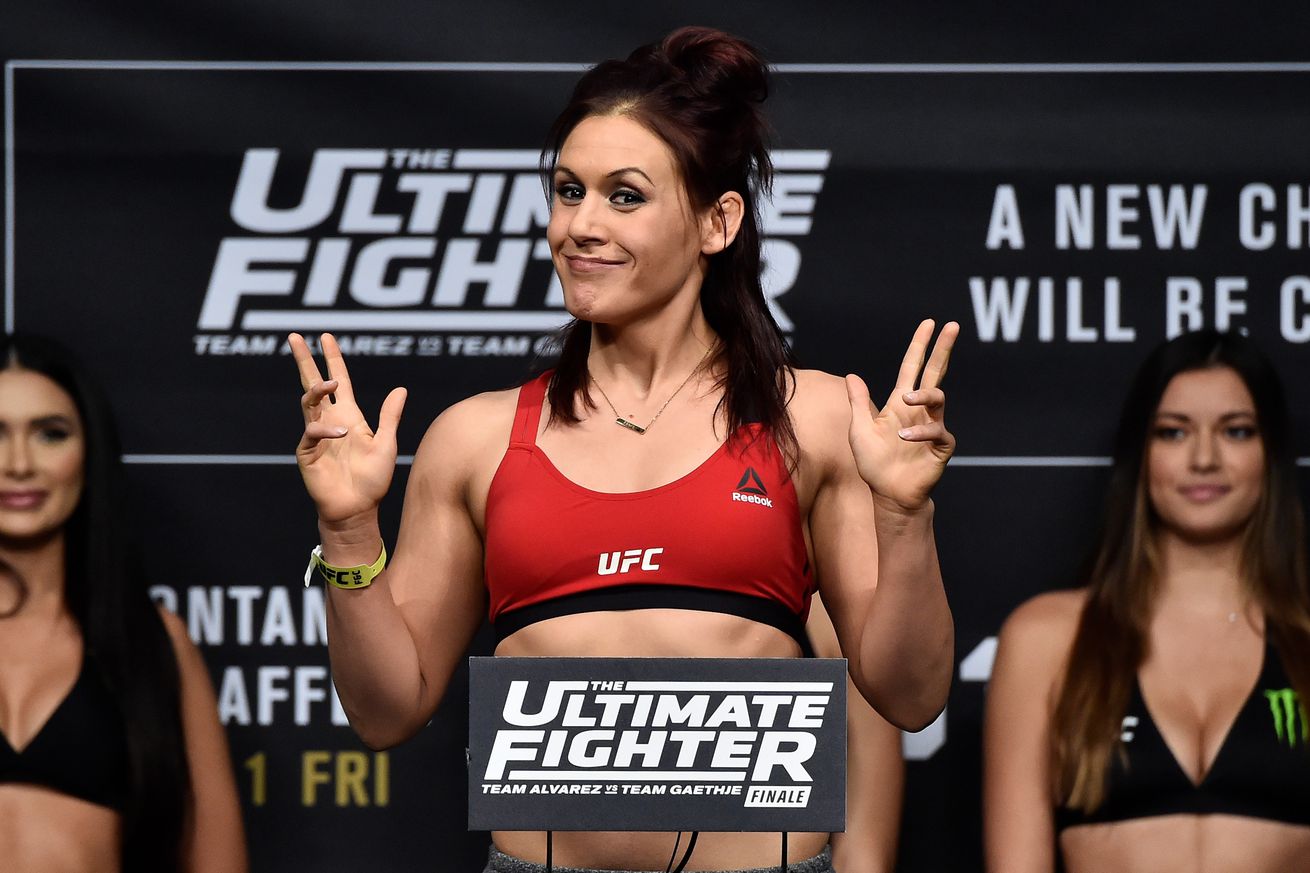 Bellator fighter DeAnna Bennett made peace with online trolls a long time ago.

After being eliminated from The Ultimate Fighter 26, she went so far as to like and agree with snide online comments about her appearance that popped up during and after the reality show.

On several occasions, her critics responded by deleting the offending post or apologizing. The rest, she tried to ignore.

But she decided she couldn’t stay silent after an experience with a particularly aggressive Instagram troll, who amid one barrage said she should die. Coupled with Facebook’s decision to punish an account that calls attention to the daily abuse female athletes face, she said things have to change.

“There’s definitely a problem with the way things are reported,” she told MMA Fighting. “Obviously, their AI and their bots are not effective and not working well. Instagram needs to take more responsibility for that.”

Bennett’s most recent experience with online harassment came after a losing effort against two-time UFC title challenger Liz Carmouche at Bellator 246. She missed weight prior to the bout, she said, because of hormone issues she is now trying to fix. She expected to be trolled about her loss and her weight, as are countless male and female fighters before and after fights.

It was one particular poster, seen in screenshots she forwarded to MMA Fighting as sprawl_law711, that crossed the line, she said. After the weigh-ins, the person continued to send her DMs and comment on threads with her name.

Replying to a post where she honored her father, a former police officer, the poster sent another message: “You don’t deserve to be there. You need to pull out of the fight, give Liz your purse go the f*ck home and die. No one wants to see you. You can’t even be professional enough to show up on weight. Go the f*ck home.”

When she shared one nasty message with her followers, the poster sent her a DM message: “The truth hurts, doesn’t it? You’re just an unprofessional c*nt, who should’ve stayed the f*ck home rather than wasting Bellator’s time and money.”

Then, the poster escalated the attack, changing the account’s profile name to “you missed weight fatty” with an unflattering picture.

“I don’t report that stuff, usually,” Bennett said. “I just ignore it, because I’m like, whatever, people are sh*tty sometimes. But I’m getting all these DMs, all this stuff, they’re relentless. They changed their profile to be about me and how terrible I am.”

According to a 2017 study from Pew Research Center, 41 percent of Americans have been harassed online, and 66 percent have witnessed harassment. Roughly one in five have been physically threatened, stalked, or sexually harassed. Eight in 10 believe social media platforms should intervene when people are harassed.

Fighters are regularly on the receiving end of vile and disturbing comments about their appearances in response to posts and via direct messaging. Bennett doesn’t respond to the majority of attacks. Other fighters directly call out posters and laugh at inappropriate messages.

“I had this one guy from like Pakistan, or somewhere in that region, send me messages about how he wanted to be a pro fighter, and his girlfriend had just died, and because his girlfriend had just died, he wanted to give me his organs if I needed them … so he could literally be inside me,” said UFC bantamweight Jessica-Rose Clark during a recent appearance on What The Heck.

Bennett reported the poster using Instagram’s online harassment and bullying form. She received an email telling her the posts did not violate the community guidelines. So she reported them again, and she got the same result. Finally, she gave up and concluded Instagram, which is owned by Facebook, wasn’t serious about stopping online harassment.

This past week, she lost her cool when the owner of the website You Look Like A Man, which calls attention to negative comments female athletes receive, said several of her social media accounts were shut down in response to the reporting of online abuse.

Bennett loves the page because it holds up a mirror to the behavior female athletes encounter when they log on. It’s a way to commiserate and support her community, she said. Punishing the reporters of abuse, she said, sends a message to online bullies that they don’t need to worry about what they post.

“Some female is trying to stand up for themselves and put it on Instagram and show the world about what these guys are doing, [and] that gets shut down, but not the original comment, not the people going out of their way to harass,” she said. “I’m not saying I want them to go through and censor, but when something gets reported, they need to figure out a way to make it that if somebody is actually getting harassed, that gets dealt with, not just swept under the rug.”

You Look Like A Man founder Jessica Fithen said Facebook took action against her after she shared a public post where a man made a crass remark about a CrossFit athlete’s genitalia. She said the platform banned her IP address from Facebook, deactivated YLLAM’s Facebook page, cut off her e-commerce account and deactivated several of her personal accounts. Her YLLAM Instagram account was not affected. The man’s posts also remained active, she said.

Before she shared the offending post, she said, a fan of the website had contacted the man’s employer, which was publicly available via his profile, and was told the employer would take action. She subsequently received messages from the man’s friends saying she’d be responsible if he ended his life or lost his job.

“I think a lot of people have been sincerely touched by this story because when they have tried to report inappropriate behavior or sexual harassment, especially sexual harassment, they are told to be quiet and not ruin people’s careers,” she told MMA Fighting.

Fithen said she started the YLLAM website and social accounts nine months ago to publicly shame online abusers in the absence of legal consequences against them. She said the poster who wished death on Bennett was unlikely to run afoul of cyberbullying laws; although many states bar the use of the internet to harass others, police are unlikely to intervene unless there’s an active plan to carry out the threat included in a message.

In a prepared statement, Instagram said the platform had removed the account identified by Bennett for displaying “a pattern of harassing behavior.”

“We don’t want people to feel unsafe on Instagram, and we’ve built numerous tools to help those who may feel targeted – including giving people the ability to block or restrict people, the ability to filter offensive comments, and ways to manage who can tag, mention or direct message you,” wrote Instagram communications rep Liza Crenshaw.

Instagram touts AI as an important tool in both rooting out and hiding offensive content. The company also backs features that allow users control who can tag and mention them on the platform, and it promises public users will soon be able to control who sends them DMs. The most direct way to stop harassment, the company says, is unfollowing, muting or blocking a user.

But for Bennett, by the time that decision is made, much of the damage has already been done. If AI isn’t escalating reports of harassment to people who can do something about it, the technology isn’t working as intended.

Fithen believes that’s part of the issue. Speaking with people who work for Instagram, she said the company relies too much on AI for policing guidelines, and there are very few actual people to enforce policies. In her time reporting violations, she’s dealt with users who’ve created over 30 different accounts to continue harassing someone.

Bennett thinks female fighters should band together more than they currently do to send the messages to large social media companies that online bullying will not be tolerated.

“When I put the comments that that guy had said up on my story, you know what he did? He went immediately into my DMs calling me a c*nt, calling me terrible things,” Bennett said. “That’s why I ended up blocking and reporting him, because of his reaction to me trying to call him out on that stuff. How is that an acceptable thing to do? So we’re just supposed to ignore it, we’re supposed to just deal with it? Why do female athletes have to put up with that kind of stuff?

“Me personally, I’ve struggled in the past with mental health issues. Young females coming into the sport, having these type of people that are out there and saying these type of things, it’s detrimental to them. The females out there, we need to be together on this and let them know it’s not just happening to you, it’s happening to all these female athletes out there, and it’s not acceptable. It’s not acceptable for people to be doing that.”

Given her experience on the internet, Bennett is all too aware that by calling attention to the issue, she will invite the very type of scrutiny she’s speaking out against. But if she can support the cause of people like Fithen, she said, “that’s more important than people saying negative things in my inbox.”

“There’s too many females that are going through the same thing as me,” she added. “It’s not like I was going in and checking the comments with my post. They were sending me messages, too. Direct messages, and over and over and over again. It hits a breaking point. It shouldn’t be that way. You shouldn’t get harassed like this.”