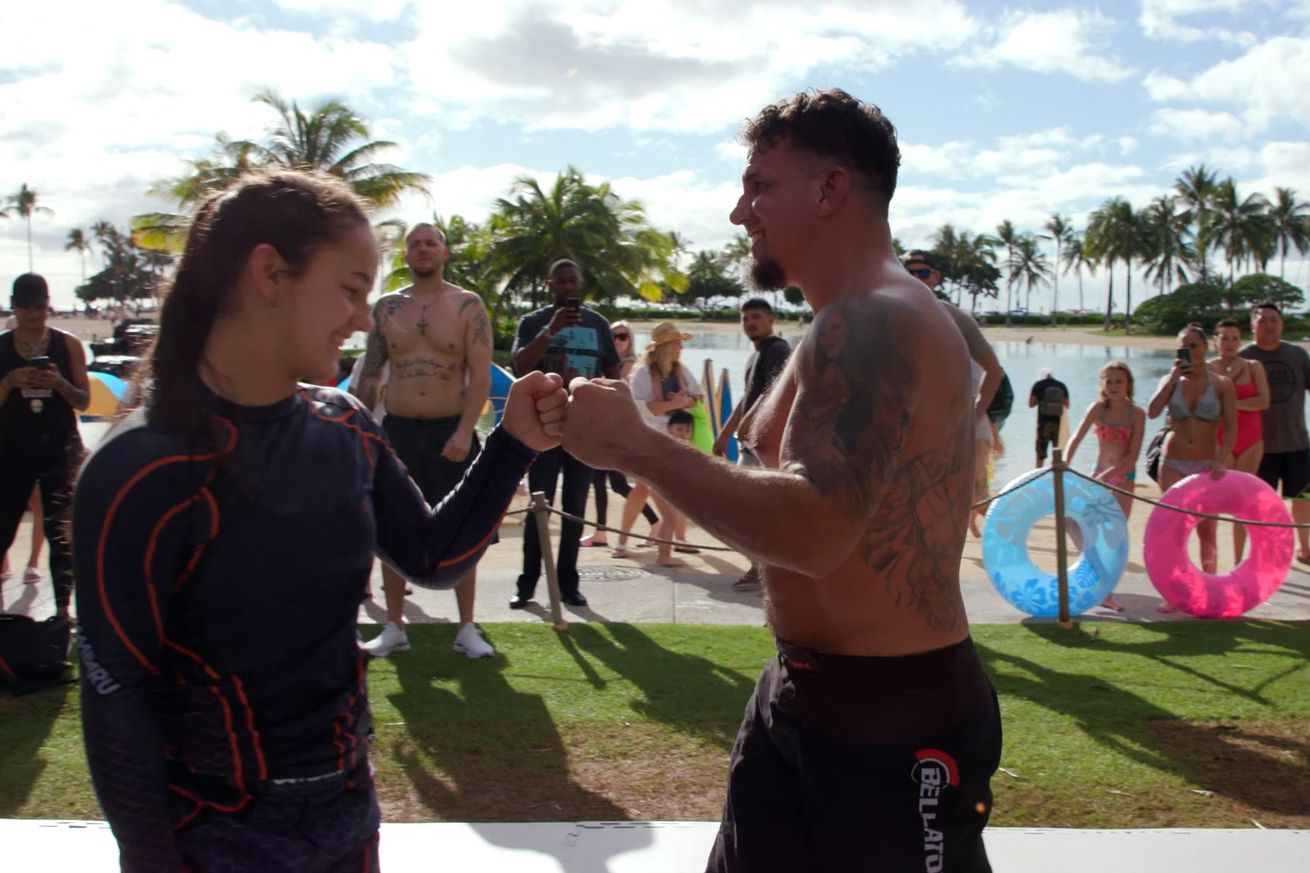 All she knows for certain is she was still wearing diapers when her father, former UFC heavyweight champion Frank Mir, was teaching her how to apply and escape an arm bar. Now just days away from her professional fighting debut, Mir is excited for the opportunity to begin creating her own legacy in the sport while showcasing everything she’s been learning since before she was old enough to walk.

“I’m excited and I’m nervous at the same time,” the 17-year-old Mir told MMA Fighting about her debut at IKON Fight Federation in Mexico with the bout airing on UFC Fight Pass. “Just been having a rollercoaster of emotions. It’s different because it’s my first fight so it was a little scary at first but I’ve been good.”

While martial arts is in her blood, Mir has been an athlete in numerous sports over the years. From softball to wrestling, she had an insatiable thirst to compete, which eventually led her to follow in her father’s footsteps.

Training alongside her dad got her started but she explains that it was actually inspiration drawn from a UFC Hall of Famer that convinced her she wanted fighting to be a career rather than just another competition.

“I officially knew I wanted to do it when I saw Ronda [Rousey] fighting and I saw her dominating in the sport,” Mir explained. “That just kind of motivated me. If I see another girl do it, I have to do it and I want to do it better.”

According to her father, Bella was going to be an athlete and a competitor no matter what sport she ultimately chose but fighting gave her something almost unmatched anywhere else — an equal playing field.

“Fighting lends itself to a unique situation where women can be on the same stage or even greater than their male counterparts,” Frank Mir said. “There’s not a lot of other sports like that. Even basketball, the female side is overshadowed by the male side. I get it but I think for a young woman that wants to be an athlete, who wants to compete, that can be very frustration.

“So when she saw Ronda at a young age and I always told her girl fighting was never going to be in the UFC. That’s what I thought 15 years ago. Once Ronda broke those barriers and crossed over, I was like this is going to happen.”

Ahead of her debut, Mir definitely feels the flutter of butterflies in her stomach but that’s a common feeling for fighters about to compete for championships in the UFC.

Of course the spotlight shining down on her is definitely brighter thanks to her famous last name not to mention she already signed with the same management team that represents her father as well as notable superstars like Jon Jones and Jorge Masvidal.

Mir understands the expectations and pressure that comes along with so much attention being paid to her professional debut but she’s learned to embrace it.

“That’s probably what I always try to do is just do my best,” Mir explained. “I don’t really like to prove people wrong or right or that I can do this or I can’t. I kind of just do this for me. I’m always testing myself. I’m always trying to put myself in the hardest positions to see if I can get out.

“I always will have that expectation. People expecting me to do better. But I’ve always kind of had that and I like that. Because I have a goal and I obviously want to beat his goals. I want to beat the stuff he’s put on, the stats in the UFC. That just gives me motivation to do better.”

As for Frank, he’ll be in Bella’s corner on Thursday night, and much like his daughter, he’s overflowing with emotions right now.

“From a father’s perspective, I’m very nervous,” Frank said. “Just because I know what it’s like to go out there and put everything into stuff, into your life and the anticipation and the hopes and what not. It can be very nerve-wracking.

“My kid’s following her dream so it’s kind of a double-edged sword cause in one aspect, I’m happy for her. In another, it makes me extremely nervous. Anyone, their kid signing up for college and they’re waiting for that acceptance letter, there’s a sense of apprehension and nervousness and anticipation. So that being said, nervous for her but then again she’s doing something she loves.”

If there’s one thing that calms his nerves it’s that Frank has been watching Bella compete and train her entire life so he’s well aware of the skills she possesses.

That probably won’t stop the pre-fight jitters but the former UFC heavyweight champion has every confidence that his daughter will prove herself once she steps inside the cage.

“It is nerve-wracking but at the same time I see how dedicated she is and I watch her perform in the gym and what she’s able to do,” Frank said.

“That gives me a little bit of solace in the fact that I’m like barring fighting Amanda Nunes right now, I’m pretty confident in whoever they throw on the other side. At this point, we’re going to be extremely successful.”