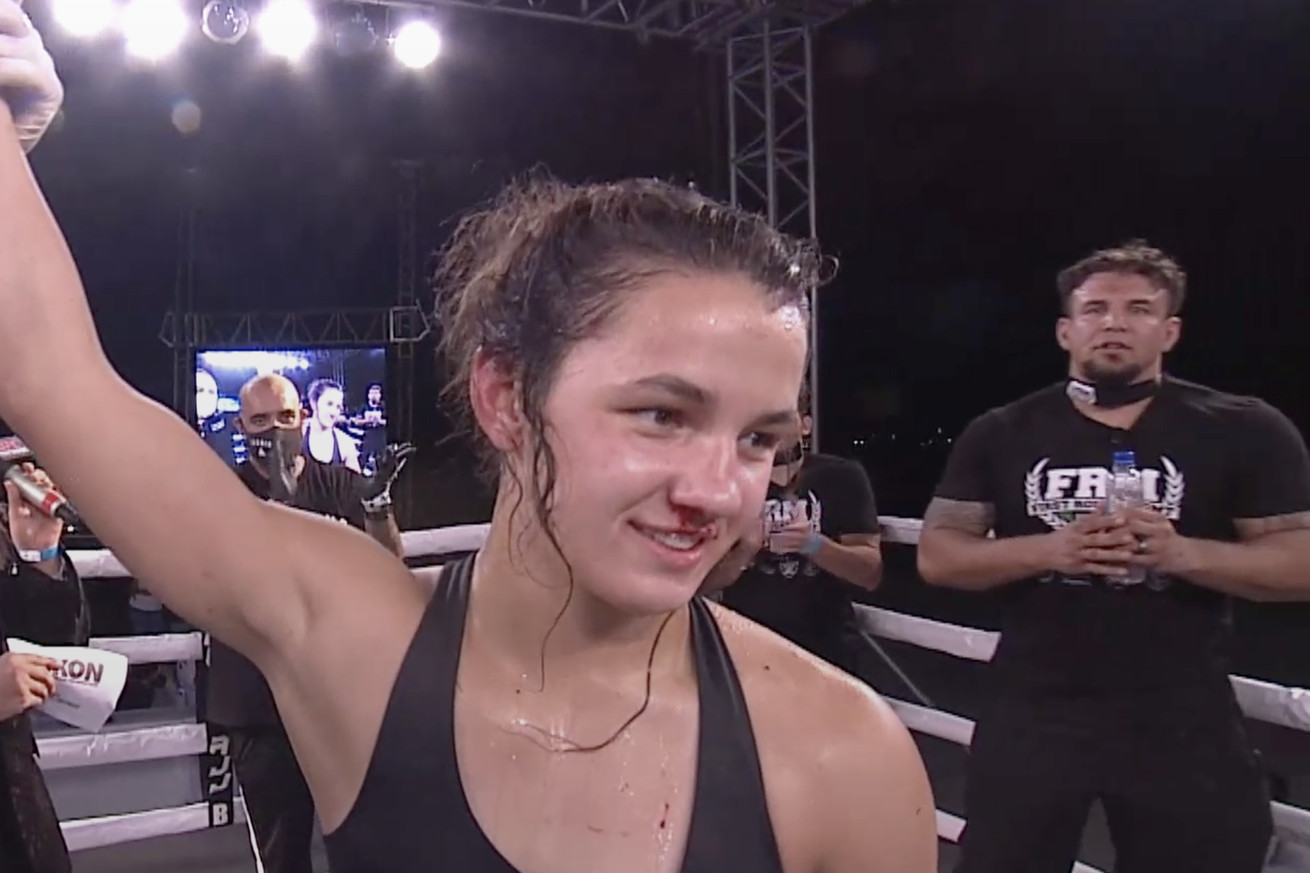 After three rounds, Bella Mir sported a swollen and bloody nose, a slight smile, and her first professional MMA win.

Her dad, former UFC heavyweight champ Frank Mir, wore the expression you’d expect from a proud papa as the Mir family gathered in the ring after the 17-year-old upstart’s unanimous decision over a surprisingly tough Danielle Wynn in the co-headliner of iKON Fighting Federation 2, which took place Thursday night and streamed live on UFC Fight Pass.

The final scores were all 29-28 for Mir, reflecting a late-round shift in momentum. Wynn bloodied Mir and made her work for everything, surviving a serious submission attempt in the third and ending the fight with a flurry of offense. Papa Mir might have sweated had his daughter not built a convincing lead after two rounds.

“I think the nerves just got me out of my head for a little bit,” said Bella Mir after the fight. “I didn’t know what to expect, but I think in the third round, I started to get into it.”

Wearing a top emblazoned with “Lady Mir,” the young upstart mixed it up on the feet with Wynn before taking advantage of a kick with a takedown. Somewhere in the course of working from top position, Wynn bloodied Mir’s nose, and Mir’s work was not enough to stop a standup.

Wynn capitalized on the space and pressed Mir to the ropes, leading to a battle for position that took up the remainder of the opening round.

Mir wasted little time working for a takedown early in the second, and Wynn’s sprawl failed to keep her upright. A jiu-jitsu match ensued, with Mir working to pass in the corner of the ring. When Wynn tried to escape, she advanced position and poured on punches. Taking more damage, Wynn turned to her side as Mir mounted her. It might have been stopped, but the referee instead opted to move the pair out of the corner, burning the final seconds of the round.

Sensing her moment to finish, Mir charged across the cage in the third and dumped Wynn to the mat. Awarded half-mount after another reposition, she tried to mount and saw the position escape with Wynn’s scramble. An armbar attempt followed, but Wynn was able to hang tight and move to top position. There, Mir’s energy appeared to wane as Wynn landed several punches in guard.

It was a strong finish for Wynn, who passed to side mount and landed big knees to the flanks. When Mir scrambled up, she found herself stuck in a guillotine attempt as time ran out.

In the main event, Andy Perez was a game opponent for Alejandro Flores, but he was outmatched almost at every point during the 15-minute fight. Flores nearly put Perez out on several occasions, landing a brutal body shot in the second that had him backpedaling for dear live. In the end, judges Flores the shutout.