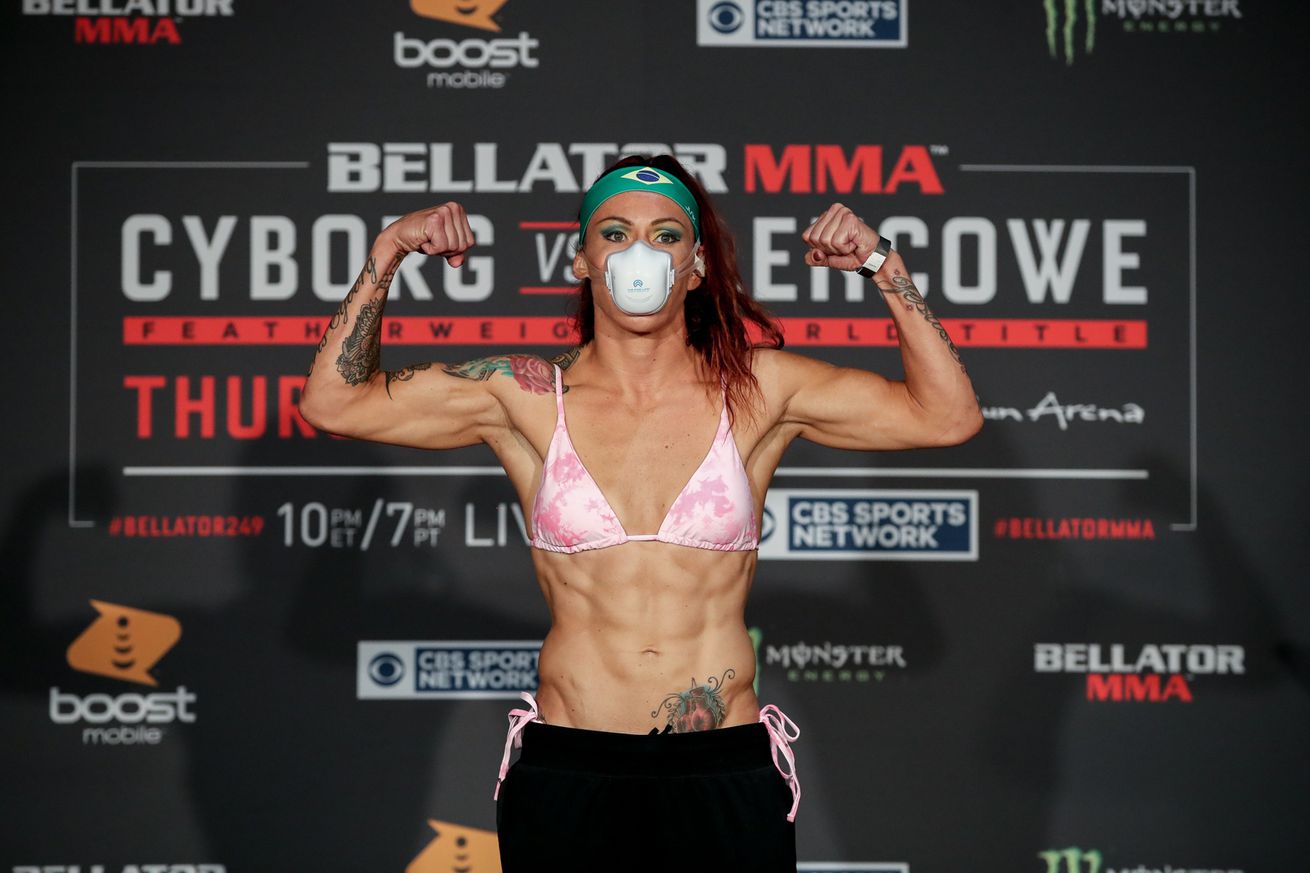 Usually, Cris Cyborg makes opponents submit to her fists. This time, she did it with a choke.

Cyborg battered Arlene Blencowe before securing a second-round submission to notch the first defense of her Bellator featherweight title and her first career submission in the headliner of Bellator 249, which took place Saturday at Mohegan Sun Arena in Uncasville, Conn., and aired live on CBS Sports Network.

Cyborg made the bloody Blencowe tap at the 2:36 mark of the second round via rear-naked choke. The submission brought a merciful end to a barrage of punishment she unleashed in a vintage turn.

“This is like a video game, and I felt ready,” Cyborg said afterward. “I started training hard after Julia Budd. I have to always improve my game.”

Cyborg let Blencowe, a former boxing champ, sneak in a few good punches as she closed distance to clinch. When she got her hands wrapped around the waist, though, Blencowe was on borrowed time, and it wasn’t long before the challenger was on her back.

In side control, Cyborg softened up Blencowe before taking mount and pounding away. When Blencowe rolled to her knees, an attempt to get out the back door was rendered moot by Cyborg’s heavy punches under her arms. Blencowe got up, and more heavy shots slammed into her to close the opening frame.

“I was really working hard for my first submission in MMA,” said Cyborg. “This is a dream come true.”

Cyborg declined to call her shot, leaving her next opponent to Bellator President Scott Coker.

Leandro Higo made mincemeat of Ricky Bandejas on the mat, securing a rear-naked choke at the 2:32 mark of the second round

Bandejas immediately was on the defensive as Higo closed the distance to mix it up with punches. Higo left his chin dangerously exposed in one exchange, but it mattered little when closed distance and took down Bandejas. On the mat, the Brazilian quickly advanced to mount and set up for a choke. The bell saved Bandejas before he was in serious trouble.

Higo needed to tries to slam Bandejas after walking him across the cage on a takedown one minute into the second. He took the back and set up for the fight-ending choke.

Bantamweight Higo picks up his second straight win, while Bandejas has now dropped consecutive bouts after a decision setback to Sergio Pettis.

Steve Mowry and Shawn Teed quickly got to work after being called up on short notice to fill in for the loss of co-headliner Patricky Freire vs. Jaleel Willis.

Slugging it out, the heavyweights traded punches with little head movement. Mowry, though, made things interesting with several lunging knees up the middle that resembled Alistair Overeem’s favored K-1 strike. After softening up Teed with low kicks and his right cross, he found Teed’s jaw with a knee that produced an immediate knockdown. Teed looked like he was done, but referee Kerry Hatley called it off after a few follow-up strikes. The official time of stoppage was 4:22 of Round 1.

The pair tested each other’s kicking ability before a slip prompted Nallo to try control in the clinch. An exchange of knees led to an errant shot from Nallo, and Awad immediately collapsed in pain. It did not look like he would get up, and it took a long time before he could even get to his knees.

After an extended stay on the mat, a visibly emotional Awad was unable to right himself, and the referee Kerry Hatley made the call to wave off the bout. Ruling Nallo’s groin shot unintentional, the bout was declared a no-contest.