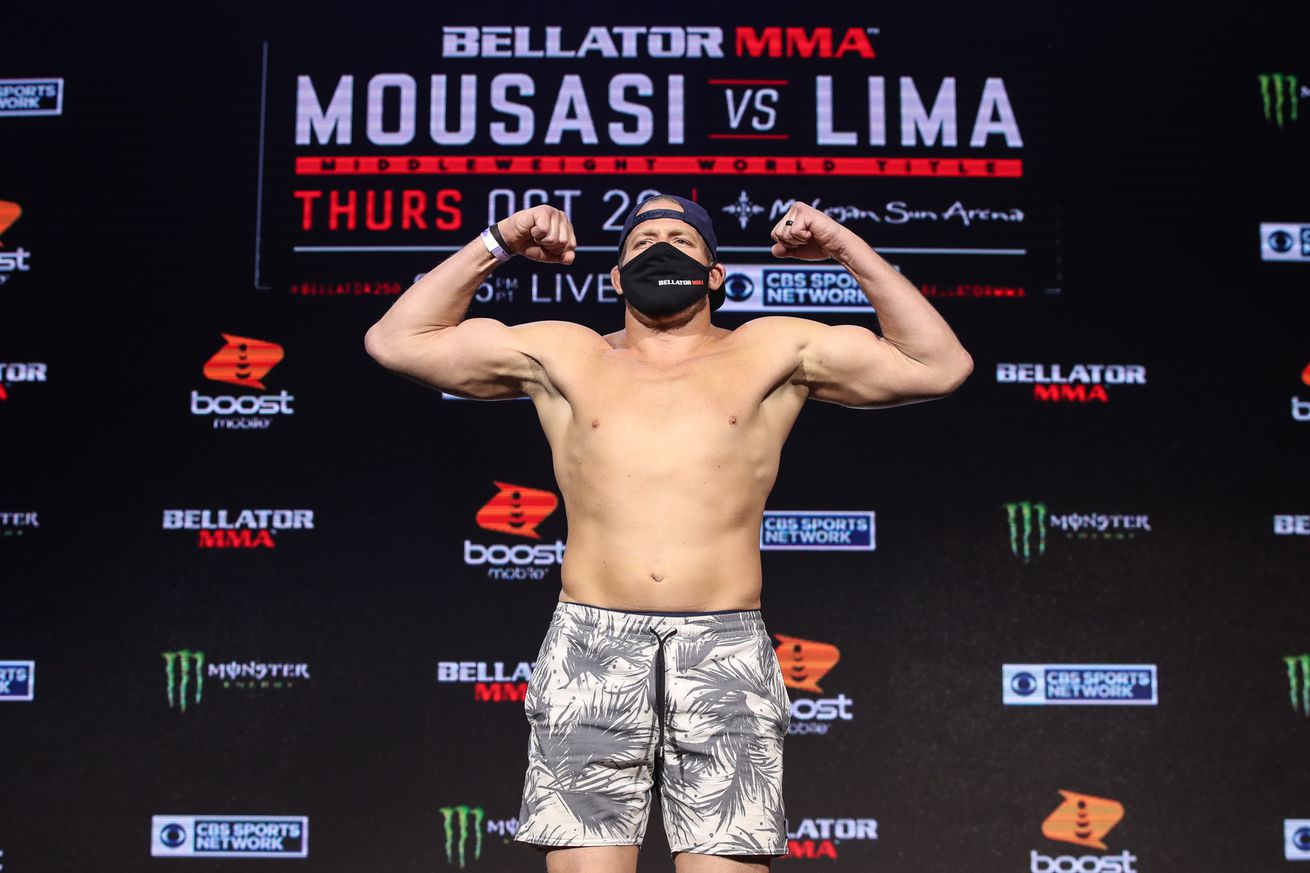 Those were just a few of the challenges former WWE champ and current AEW star Jake Hager faced over three grueling rounds with former Pittsburgh Steeler Brandon Calton before judges awarded him a split decision for his third Bellator win.

Hager’s grappling frequently got him out of trouble when he ducked under his opponent’s arms to work offense from the back. But when Calton proved unexpectedly tough to take down, he was forced to slug it out.

It was on his feet that Hager demonstrated the toughness necessary for greatness in high-level MMA. His technique wasn’t even close to there. The difference in power between his right hand and Calton’s was huge. At one point, Calton’s corner audibly yelled, “He’s telegraphing his right?”

“Don’t you think I know that?” Calton responded.

But there were many points where he could have folded and didn’t, like when Calton caught him with a cross that knocked him senseless at the end of the second round. Where Calton not hamstrung by his cardio, he might have been finished.

The Bone Crusher was coming in strong to close out round 2️⃣.

The 3️⃣rd and final round of our #Bellator250 Monster Energy Prelims is LIVE NOW on YouTube!
▶️ https://t.co/z4dwej4LBD pic.twitter.com/hswAFjDYfg

Instead, Hager rallied in the third round, using his jab to set up his right hand. Several times, he was hurt by Calton’s punches. Another right hand sent him staggering again. But he clinched up and stopped the punishment, throwing knees in close, right by Calton’s tattoo “We The People.”

Separated after an inadvertent knee to the groin – thankfully, this one wasn’t bad enough to produce a stoppage, like in his last fight – Hager punished Calton’s body with jabs and kicks and finished strong.

The scorecards were 29-28 twice in favor of Hager, who was the picture of exhaustion post-fight, and one 29-28 tally for Carlton, who claimed he could go another couple of rounds to settle things.

Hager’s wrestling colleagues were blown away.

Wow! What an absolute slugfest!! Congrats on the W @RealJakeHager , now someone grab that man a raw cold steak for that face.

Holy smokes @realjakehager just won a WAR at @bellatormma 250
tonight and remains UNDEFEATED IN MMA!! Even though his modeling career might be over, you might wanna think twice if you wanna mess with the #InnerCircle… https://t.co/hE5GiZ0VtP

Congratulations to the Inner Circle’s @RealJakeHager on remaining undefeated with a win over #BrandonCalton at @BellatorMMA 250 pic.twitter.com/FYpls7LbUL