Bellator middleweight contender Fabian Edwards has been putting the COVID-19 lockdown to good use as he has spent some quality time with his family. But, given the fact that his brother is UFC welterweight contender Leon Edwards, it’s meant that “The Assassin” hasn’t missed a beat ahead of his upcoming assignment.

Ahead of the matchup, Edwards told MMA Junkie that he didn’t have to kickstart a fight camp when he learned of his booking, because he’s been training throughout the lockdown.

“It’s been good. I’ve had some extra time with my kids and my family and I’ve been training constantly,” he explained. “Since the fight was called off and everyone went into lockdown, I was fortunate to have my brother to train with, so I’ve been training every single day. When Bellator came to me to tell me about this fight, I was already training, so for me to kick it up another notch was easy to do, because I wasn’t on the sofa.”

The matchup pits two dynamic European contenders head to head in a matchup that could propel the winner toward the division’s biggest names, and while Edwards admitted he has eyes on a host of top names at 185 pounds, his upcoming opponent’s ties to former middleweight champion Gegard Mousasi aren’t lost on him.

“When I beat this man, I’ll be calling out the likes of John Salter, Gegard Mousasi – I’ll even be calling out Douglas Lima, because he thinks he’s big enough to come up to middleweight,” he said, before revealing the temptation to call out Mousasi, who could be in van Steenis’ corner on fight night, might be too much to resist.

When asked how he might react if he defeats van Steenis, Edwards said, “We say ‘when,’ not ‘if.’ When I sleep him or choke him, do what I want with him, I’m running over and I’m screaming at Gegard!” he laughed. “I’m screaming at him! So you better be ready for that!”

Edwards’ last performance saw him edge a split-decision verdict against fellow countryman Mike Shipman at Bellator Europe 6 last November. It was a fight that saw the pair spend a sizable amount of time clinching and battling against the fence. It’s not how Edwards likes to fight, but he said his acceptance of the position during the fight was something he has since addressed in training.

“I fell out of love with actual wrestling, but I’ve gotten back into it in this training camp,” he explained. “Especially because my last fight was close, but it wasn’t because of wrestling, it was because of my reaction to getting off the cage. I was too content to hold. I’m happy I had a fight like that so early in my career because I understand now, so when I fight a guy like John Salter, he’ll do something similar and I’ve fixed those errors and will be able to deal with him a lot better.”

As for van Steenis, Edwards says he’s expecting a tough, durable challenge, but he suggested that the Dutchman won’t surprise him with anything he hasn’t seen before.

“I think he’s more durable than the guys I’ve previously fought,” he said. “But, in terms of skillset, I don’t believe he brings any high fight IQ. He’s explosive, but we’re all explosive, so I don’t believe he’ll bring that much to the table. He’ll be game, but he won’t stay on his feet for long. I’m not saying I won’t attempt a takedown, but he’ll probably attempt the first takedown due to me putting strikes on him. I don’t think he’s at the very highest level, but he’ll probably be the toughest guy I’ve fought.”

The matchup will also see the pair fighting inside a largely empty arena, and while the eerie silence of fighting with no fans in the stands may be strange for some, Edwards said he’s fine with it, and even said the experience will take him back to the early days of his career.

“Growing up, I used to have ‘straighteners’ in the park!” he laughed. “No crowd, just one guy in front of me and maybe one or two people watching. So this is bringing me back to that experience, it’s raw. I haven’t been doing anything different (to prepare), but I’m mentally ready. I’ve been telling everyone around me I’m really looking forward to having no crowd. Just hearing my corner team, hearing the shots connect. I’m fully tuned in.” 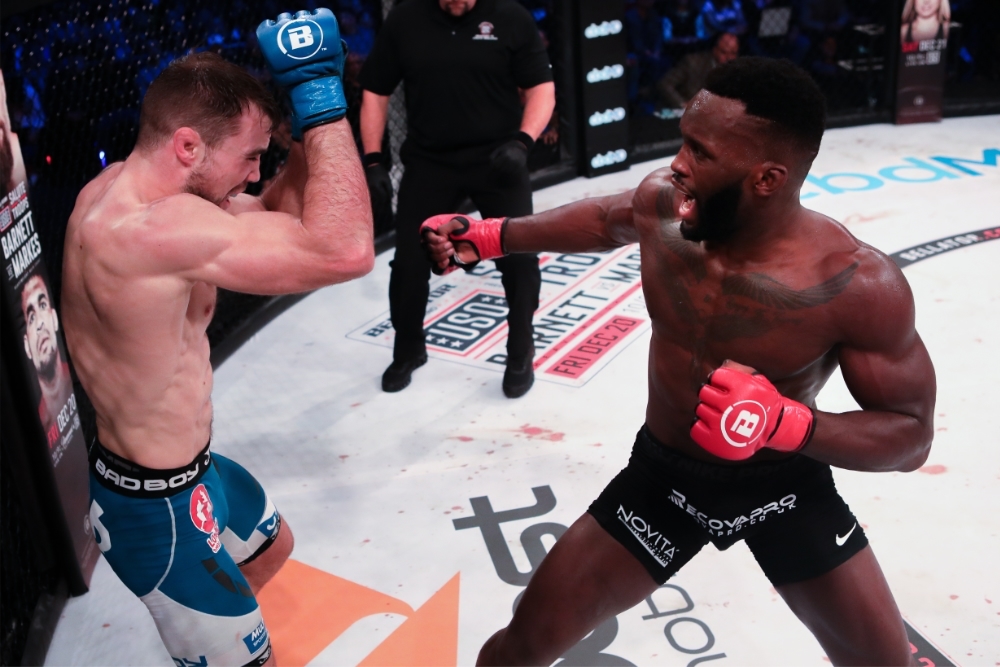