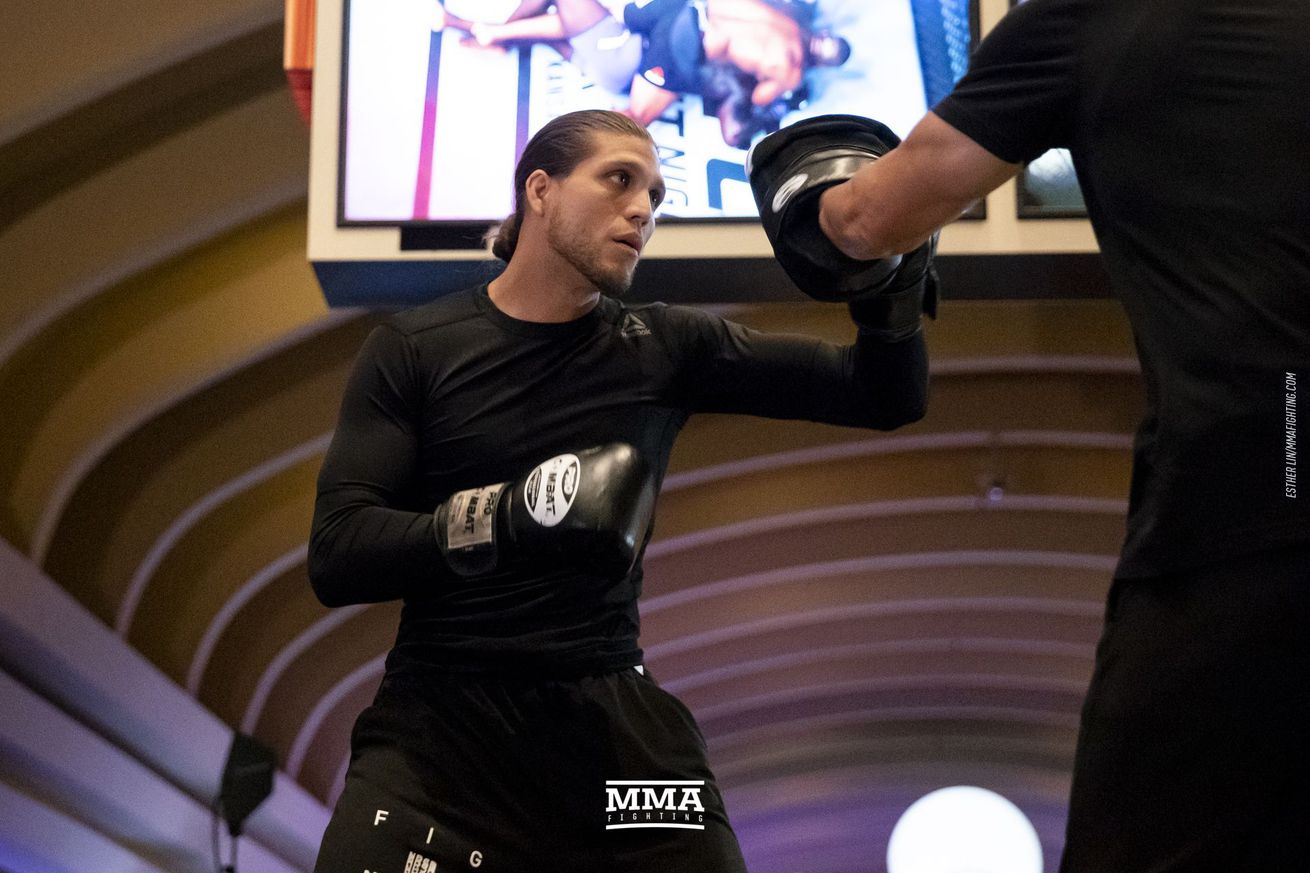 Just because Brian Ortega has a massive challenge ahead of him doesn’t mean he hasn’t thought about the potential opportunity that awaits with another win.

Ortega faces “The Korean Zombie” Chan Sung Jung in the main event of UFC Fight Island 6 on Oct. 17, a highly-anticipated matchup that has already seen its fair share of drama. But given that UFC President Dana White recently reiterated that either Ortega or Jung will likely be the No. 1 contender after next weekend, one can’t help but wonder how Ortega might fare against current featherweight champion Alexander Volkanovski.

It’s a fight that’s been on Ortega’s mind as well and he admitted as much in a recent interview with MMA Fighting.

“I’ve thought about the guy for sure,” Ortega said. “I just look at him as an interesting challenge. Can I keep it technical with him and can I play his game? Or do I play his game or do I make it a dogfight? … For me, if I would try to be too technical with him and then if that’s not working I’d just basically make it a dogfight. Sometimes it goes well for me, for the majority of my career it’s gone well.

“But what Max [Holloway] did kind of exposed me as not the best technical guy, so I had to go back in there and fix the patience game, you know? I hate it. You have warriors in there and you have fighters, but they’re both different. Neither is better than the other one—I mean, the one that wins, but I was more of the mentality of the warrior that doesn’t quit. Let’s just go in there and test each other’s will, that was always my mentality. Either I’m gonna get finished or you’re gonna get finished. But in this game, you have to have some smarts and you’re gonna run into people that know how to play human chess, not just f**king warriors and it was a lesson for me.”

It’s been 22 months since Ortega was defeated by Holloway. The two fought at UFC 231 in Toronto, with Holloway handing Ortega the first loss of his career. The then-champion dominated the fight on the feet, bludgeoning Ortega to the point that a doctor called for a stoppage in between the fourth and fifth rounds.

It was a harsh lesson for Ortega, who up to that point had been the one handing out the highlight-reel finishes. The 29-year-old won six straight fights by knockout or submission (excluding a submission win over Mike De La Torre in his UFC debut that was later changed to a no contest when Ortega tested positive for drostanolone) to earn his shot at Holloway, a contrast to the path that Volkanoski took to get to his title shot.

Four of Volkanovski’s first seven UFC fights went to the judges’ scorecards and then he won on points in both of his championship fights with Holloway. Despite their differing methods, Ortega believes there’s no arguing with Volkanovski’s results.

“He’s a very smart fighter,” Ortega said. “He’s very intelligent basically, from what I’ve gathered and what I’ve seen from him. He knows how to work his angles and he knows how to set up his shots in order to achieve what he wants and to score points and basically win the rounds. If he doesn’t finish you, he makes sure that he wins the rounds. Fans will always have this thing like, ‘He’s not a real fighter,’ and then people will always be like, ‘No, that’s a smart fighter.’ Somewhat similar to [Georges St-Pierre] where you’re like, ‘GSP always wins the fights, but he’s boring.’ But he’s always winning the fights, whether you like it or not.

“Even if you finish the champion or you don’t, if you have him beat on all the rounds then you have him beat on whatever rounds you won. I’m not a judge. I was looking at the fight maybe like Max won the second one, but then when you look at it closely and then you start counting points, I think [Holloway was] just a little bit behind on the points this time.”

Holloway is the one opponent that Ortega and Volkanovski share, which meant Ortega paid close attention to the 50 minutes that Volkanovski spent in the cage with “Blessed.” While he and Holloway are different fighters, Ortega couldn’t help but think about what he would do in certain situations when he watched the Volkanovski-Holloway fights.

It’s the same level of scrutiny that he gives to the majority of the featherweight division.

“I saw the fight and I was like, ‘F**k, this is what I would do,” Ortega said. “[Max] would get smacked and it was, ‘F**k, here’s what I would do against Volkanovski.’ It’s hard not to put yourself in the cage when anyone in my division fights, for me. Because I potentially see myself fighting all the top guys. So whenever I see anyone, I don’t care if they’re up-and-coming or whatever, I always envision myself fighting them. I always pay attention to them because I did the same thing. I started as a nobody and eventually I grew. I went in there and started doing my thing and earned my stripes in the game the way I did.

Though several intriguing challengers have emerged in Ortega’s absence—such as Zabit Magomedsharipov, Calvin Kattar, and Yair Rodriguez—Ortega heads into his fight with Jung with a top-3 spot in the UFC’s official rankings.

He’s confident that a win over Jung gets him a fight with Volkanovski, especially with White being on record about the stakes of the UFC Fight Island 6 main event.

“He said everything about our fight being for the No. 1 contender, but then I heard some other news with Zabit and all this stuff and everyone saying they had No. 1 contention,” Ortega said. “But I was like, ‘Where’s your proof versus mine?’ I got video proof.

“So now that he kind of went out there and just restated that, it makes me feel better. More confirmation that whoever wins this fight will get a crack at that belt.”