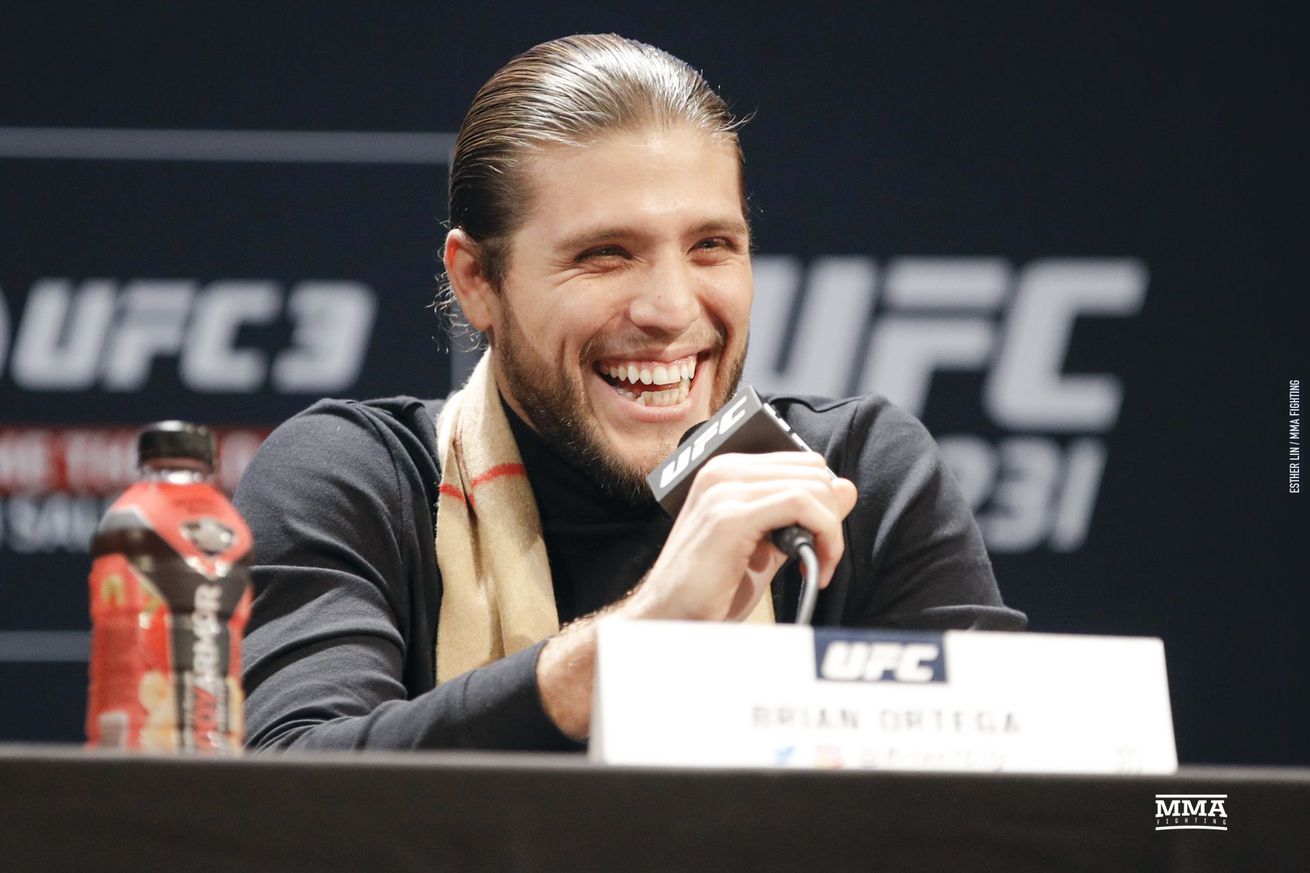 Brian Ortega has always taken his time in his fights, a sharp contrast from his rapid ascent to stardom.

We’re 20 months removed now from Ortega’s most recent outing at UFC 231, which served as the culmination of a four-year rise up the UFC’s featherweight rankings. During that time, Ortega established himself as not just a thrilling fight-finisher with a penchant for third-round dramatics, but the kind of California-cool personality that fans could easily latch onto.

Facing champion Max Holloway, Ortega fell short for the first time in his pro or amateur career, succumbing to the Hawaiian’s superior striking before a doctor waved off the bout between the fourth and fifth rounds. It was a humbling experience for Ortega, without question, and one that he would end up having plenty of time to mull over.

A year later, Ortega, 29, was booked to face another fan favorite, “The Korean Zombie” Chan Sung Jung. The infamous injury bug reared its ugly head and an ACL injury forced Ortega out of the highly-anticipated matchup. That meant several more months of recovery for Ortega and once COVID-19 hit, it became even more unclear when the UFC would be able to match him up with Jung again.

There was other drama in the aftermath of the bout cancellation. Ortega senselessly attacked Sung’s manager at a UFC event in March, an infraction for which he has since apologized. The action was uncharacteristic of the Ortega that the outside world had come to know by that point and perhaps an indication of just how far Ortega had strayed from his humble beginnings.

Ahead of his fight with Jung at UFC Fight Island 6 this Saturday, Ortega spoke to MMA Fighting about how having time off has helped him recenter and refocus for what is a pivotal moment in his budding career.

“I feel at peace now, so it’s definitely helped,” Ortega said of his break from competition. “All this has definitely helped. Before I felt like I was living life in the fast lane. Especially because my agent he works double-time. It’s not like fighters where you fight and then you’re good. He’s like, ‘No, champ, check this out. After you fight, you’re allowed to have a one-week break. If you’re not broken, I’ve already set you up to fly to Chicago, I’ve set you up to fly to New York.’ I have this, I have that.

“Obviously, when you’re making money, you’re making moves, it feels good. Living in the fast lane has its great things, it’s a bit lonely but you hear it all the time. It’s lonely at the top. So for me I was like, ‘F*ck it, it’s lonely. Hotels are my new home.’ It’s why airplanes and hotels are what I call home. But when it all stops and you have that heartbreak and then you finally see how great it is also on the other side and life is a bit slower, you learn—at least I learned—to appreciate things more.”

The son of Mexican immigrants who grew up in a rough area of Los Angeles, Ortega has come a long way from his mother having to bail him out of prison for his youthful indiscretions. With UFC success came major networking opportunities and Ortega found himself helping to train Academy Award-winning actress Halle Berry for a movie and involved in charitable efforts with Iron Man himself Robert Downey Jr.

He admits to having lost touch with those close to him, as one tends to do when one goes Hollywood.

“I got to connect with my people again [after the Holloway fight],” Ortega said. “And they told me, ‘Yeah, we’ve been disconnected on a different level. We’re proud of you so we’re not gonna tell you nothing, we want you to keep winning. But once this happened, we got Brian back.’

“To hear that from everyone, not just one friend or two friends, but from my parents and my sisters, my family and everyone it was like, ‘F*ck, sorry. I didn’t even see it.’ I was just happy, I was riding this wave and f*ck, I forgot to look around. I can finally train and get everything better again.”

Ortega laughs at the suggestion that he was living a rock star lifestyle because in his mind that’s exactly what he was doing. For a while, outside distractions appeared to have little effect on his performances. On his way to earning a title shot, Ortega made short work of former lightweight champion Frankie Edgar, choked out the likes of Cub Swanson, Renato Moicano and Diego Brandao, and roasted veteran Clay Guida with a knockout knee.

The process to reach these winning outcomes wasn’t as enjoyable. Somewhere along the way MMA became a J-O-B and that didn’t sit well with “T-City.” However, in September, less than a month away from his clash with Jung, Ortega declared that he’d rediscovered his love of the game. A love that he describes as being as volatile as any other kind.

“When you’re in a relationship for a long time, you learn to hate whoever you’re with and I think it’s normal,” Ortega said. “I think everyone who’s been there for over 15 years can relate to me. Or anyone who’s been in any type of relationship with anything or anyone. It just comes a point where it’s just too much work or you get too comfortable with it or whatever, you don’t get those butterflies anymore. Like the whole, ‘I’m excited to keep doing this.’

“I’ve been training since I was five years old. So for me I’ve had a 25-, 26-year relationship with it. When you’ve known nothing but punching men and punching bags and training in jiu-jitsu and MMA. I started MMA at 15, I had 11-0 amateurs by the time I was 19 and then I went pro and had 15 fights there. I had two surgeries and all these things. I was always involved in it and it just, for some reason getting closer to my fight with Max I fell out of love with it. It turned more into a job than what I do that I love. The fact that it is a job, it makes you go, ‘Dude, you’re grown up. Do the job.’ But finally, it took this loss to go, ‘Listen, you’ve been getting away with all your other stuff but it’s not working anymore. Now you need to better all this.”

So why didn’t Ortega make these adjustments sooner? For the same reason any of us avoid trying new things: He was afraid of failure.

“And the reason I didn’t want to better everything else was because I was too stuck on my pride,” Ortega continued. “I didn’t want to go and do wrestling practice because I know I would suck at it. I didn’t want to go do this because, like anyone who starts something that they’ve never done at a beginner level, you feel vulnerable, insecure, or you don’t know how to do it. And for me, I was like, man, I don’t want that feeling.

According to Ortega, he reached elite status training out of his garage and eating Jack in the Box. Sometimes Denny’s. Nutrition was the farthest thing from his mind as he believed that as long as he trained hard enough, he could put anything in his body.

When he finally began adding proper nutritionists to his team, they were incredulous when he told them what his preparation—or lack thereof—was like.

“Literally, everyone that I hired as part of my team, they’re like, ‘What’s your diet? What’s your structure? What’s your this and what’s your that? And how do you operate before?’” Ortega said. “I was like, ‘I never even operated, dude. I just eat when I’m hungry and I train when I want to train.’

Ortega’s team includes not just those who have been with him since day one, but sponsors who have stuck by him during this long stretch of inactivity. He’s been given advice on how to clean up his diet, how to properly hydrate (Ortega admitted that he used to refrain from drinking water as a show of resilience during training) and yes, for someone used to flowing freely through life, how to better structure his workouts.

“I have my nutritionist go like, ‘Yo BODYARMOR, this is what we need from you guys this month,’” Ortega said. “We need this many cases of water. I’m working with all my sponsors as a team now versus, ‘Guys, can I just get a bunch of free sh*t?’ … The way everything’s working right now, these guys are part of my team. I’m part of them, but they’re working with me for what I need not just what I want.

“A lot of people will tell you, you get sponsors and you end up with a bunch of sh*t you don’t have or you don’t want or that you end up giving away. With them we’re like, ‘Okay this is what you’re drinking.’ We have the mathematicians out here, they add everything up.”

Entering a fight coming off of a loss for the first time, Ortega recalled being a 16-year-old blue belt, when he would try and fail and try and fail. Even success was fleeting as a move that worked wonders against one opponent would prove useless against another. Still, somewhere along the way he began to neglect certain aspects of martial arts and that ultimately cost him against Holloway.

Should an opportunity to challenge for a UFC title come Ortega’s way again, he expects his skill set to be in line with his passion next time.

“I’m excited to go to the gym and see what the hell I’m gonna learn or what I can perfect again or what I can do better than I was doing before, what I can make land better than I did before,” Ortega said. “What I can do to takedown the way that I did every opponent. This whole thing has just been, ‘Wow, this is what MMA is.’ I’ve only done jiu-jitsu and boxing my entire career and I didn’t really have the most technical side of the standup before. It was just like, ‘You got this, just put your chin down and swing away.’ Let’s hit the mitts so you have cardio.

“But now it’s like, no, check this out, these are called angles, so you don’t get hit. This is called defense so you don’t have to use your warrior mentality. So I was thinking that day when I posted that I was like, I’m so f*cking in love again with everything that it’s like I found my butterflies again.”