Cal Ellenor has had plenty of time to think about facing James Gallagher and now, more than a year since their original fight booking, the Englishman is ready to step into the Bellator cage and throw hands with “The Strabanimal.”

Ellenor (8-2 MMA, 1-0 BMMA) will take on Gallagher (10-1 MMA, 7-1 BMMA) in the main event of Bellator Europe 9 Saturday in Milan, Italy with the pair finally set to face off at the fourth time of asking after their first three bookings were scuppered.

Issues with Ellenor’s medical paperwork forced him out of their originally scheduled date in Dublin last September at Bellator Europe 4, then an injury to Gallagher nixed their rearranged matchup at Bellator 240 in February. Their matchup was pushed back to May in London as a result, but the arrival of the global COVID-19 pandemic forced the cancellation of that event as the sporting world went into lockdown.

Now, with Bellator back up and running again, Ellenor and Gallagher have been booked once again and now, after both men made weight with no issues, they are finally set to face off inside the Bellator cage.

Chatting to MMA Junkie ahead of the long-awaited bout, Ellenor said he has seen enough of Gallagher over the last year to ensure he’s fully prepared for the matchup, and stated that he has reinvented his own fighting style ahead of the bout.

“Obviously people learn new things. It’s been a while since I’ve seen him fight, so he might bring some new tricks to the table, but I’m not even worried about that,” he said. “I’ve seen what he’s good at and what holes he has in his game, and I’m just focusing on me.

The matchup features two fighters who both love to start fast and push the pace on their opponent. But Ellenor said the key difference between them is how they react to pushback from their opponents.

“When things don’t go his way, he can’t handle it. That’s the type of fighter he is,” he said. “If he’s not putting people away he starts to panic, and that’s how I see it going. I see him coming out strong and aggressive, like he does, and then I just feel like I’m going to wear him down, then I’m going to stop him. I don’t know if it’ll be via striking or submission, but that’s how I see it going.”

Gallagher’s Bellator fights have often seen him competing in front of a raucous Irish crowd inside Dublin’s 3Arena, but Saturday’s matchup in Milan will play out in a virtually empty arena due to COVID-19 restrictions. Ellenor said he’s experienced similar environments before in his career, but pondered whether his opponent may not have the same edge without the backing of 9,000 screaming Irish fans in the stands.

“The temperature’s going to be a lot cooler in the venue, and the atmosphere’s going to be different,” he said. “But I fought for (Russian promotion) ACB before in Manchester, when I was the first fight on the card and it was a virtually empty arena, so I’ve already experienced it. Once that cage door shuts, though, it’s no different for me. It might be different for James, as I know he likes to feed off the crowd. But, for me, I’m not arsed. I just get in there and fight.”

It’s been a long wait for Ellenor, who hasn’t competed since his Bellator debut back in February 2019 when he defeated Nathan Greyson via first-round submission at Bellator Europe 1 in Newcastle, England. Issues with inconsistent medical paperwork, plus family tragedies, have meant that Ellenor has been fighting in different ways while his MMA career has been on an unplanned hiatus.

But now the Sunderland man, who has finished all eight of his opponents inside the distance, said he’s come through a tough period in his life and he can’t wait to show the world his fighting style and get his career back on track once again. 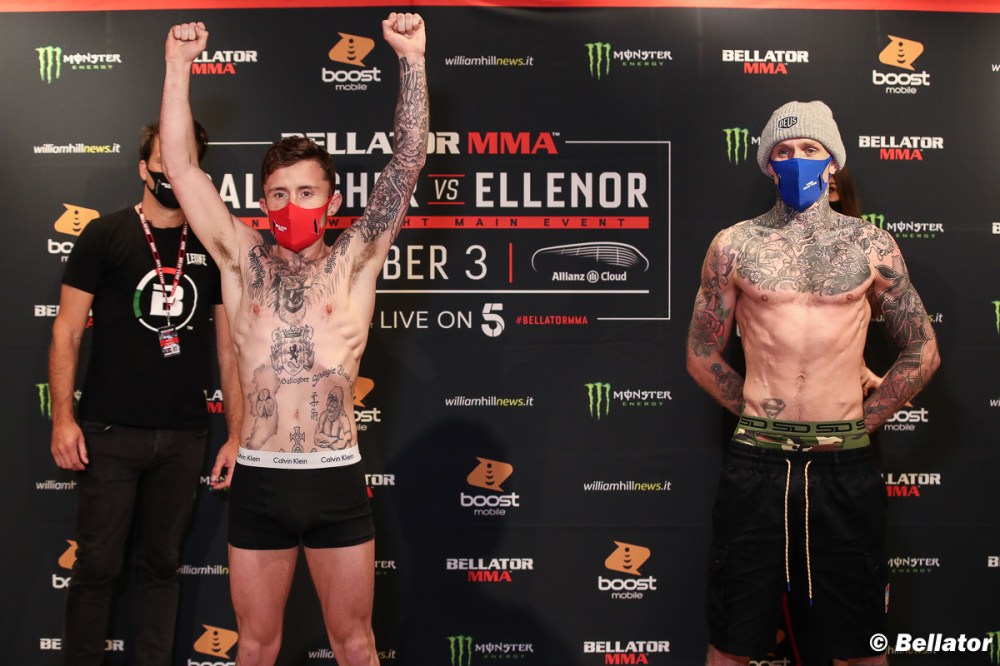