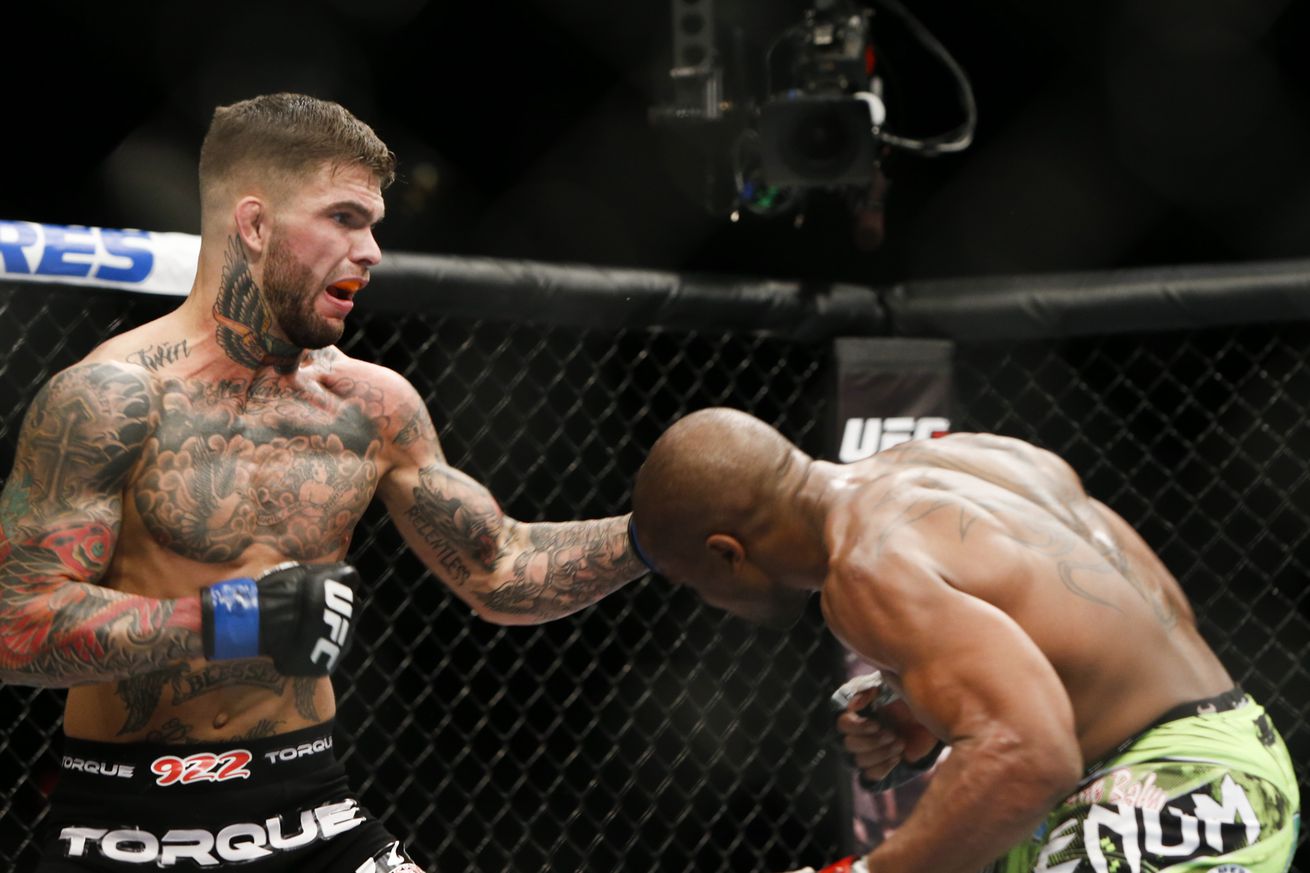 Cody Garbrandt was seeking a second UFC title in November, but instead he’ll be forced to watch from the sidelines after an injury knocked him out of his scheduled bout against flyweight champion Deiveson Figueiredo.

The news broke on Friday that Garbrandt was off the card and Alex Perez was now stepping into face Figueiredo in November.

The Ohio native later revealed that he suffered a bicep tear that ultimately cost him the title fight. According to Garbrandt, that injury occurred after he finally returned to training full time following a battle with COVID-19.

“I wanted to let everybody know I have a distal bicep grade 3 tear,” Garbrandt said during an Instagram live session. “I had COVID, I tested positive for COVID a few months ago and I wasn’t able to train MMA for about a month and a half. I kept my weight low, that’s why I’ve been cycling a lot just to keep the conditioning up.

“I got back into MMA training a little over two weeks ago so I just thought my bicep was sore. Just from training, hadn’t been doing MMA, been cycling a lot, doing strength and conditioning. Keeping my diet really clean and healthy. Been waking up at 141 [pounds] so my weight’s been good.”

The rigors of a training camp could explain the sore muscles but Garbrandt says as time passed, the pain he was dealing with in his arm only got worse.

Eventually, it forced him to see a doctor to find out what exactly was happening.

“My arm was sore for about two weeks just from getting back into MMA and hard training. Obviously, it was seven weeks out from the fight,” Garbrandt explained. “So then Monday I went to strength and conditioning, training, finished with some bag work. My arm was a little tight. Thought nothing of it. Came back two or three hours later to work with my striking coach Michael Malott, had a great pad session then. Obviously it was still tight and sore. Later on throughout that night and evening, kind of throbbing pain, more sore than usual. So I put some CBD cream on it and took an edible and went to sleep. Passed out and woke up at 2 in the morning in excruciating pain.

“My bicep was really swollen up, off to the side. So I ended up waking up, texted my coach ‘hey I’m not going to make it to practice this morning, I think my arm is infected.’ I thought it was an infection. So I ended up at hill sprints at 1 with my coach and at 3:30, I was going to go see my physical therapist anyway. I usually go every Tuesday. So I texted my family doctor ‘I think my arm is infected, something is going on.’ So I went there, did an ultrasound on it and saw the tear.”

As much as Garbrandt hoped that the bicep tear wouldn’t cost him the title shot, once he notified the UFC a decision was made to move forward with Figueiredo facing Perez instead.

Now the former bantamweight champion is awaiting final word on the extent of his injury and the time it will take to recover as he anxiously awaits the opportunity to compete again next year.

“I went and saw at surgeon yesterday. Waiting to get an MRI to see if anything else is damaged,” Garbrandt said. “Spoke with the UFC to let them know I probably needed five weeks, I’d be back to training so I could fight at the end of December. They chose to replace me with Alex Perez. I can’t be upset or mad, the show must go on, I understand that.

“But they did promise me the title fight upon return of being healthy. Can’t fight destiny. It’s my destiny to be a world champion. It just wasn’t to be in November. So 2021, excited to get back in there.”

Garbrandt is coming off a stunning knockout over Raphael Assuncao in his most recent performance. Following that win, he was granted the title shot in his 125-pound debut but now he’ll have to wait until 2021 to battle for flyweight gold.