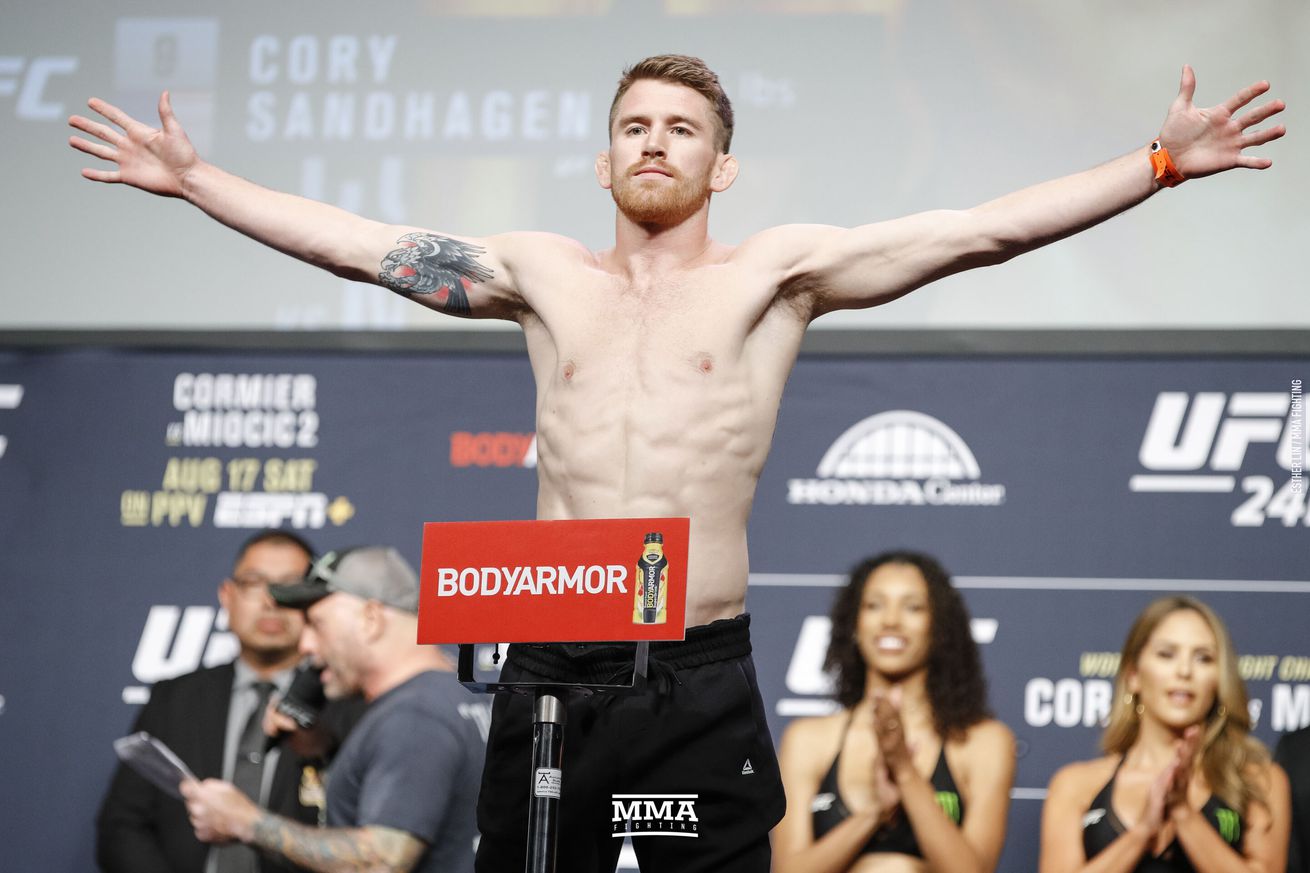 Coming off a loss to Aljamain Sterling in his last fight, Cory Sandhagen was admittedly shocked when he received a call that the UFC was interested in matching him up against Marlon Moraes next.

Considering how the fight with Sterling played out, Sandhagen expected to face a lower ranked opponent as he attempted to bounce back from a less than stellar performance. Instead, he got a call from his manager explaining how bout agreements were being issued in short order for a headlining opportunity against Moraes, which takes place this Saturday at UFC Fight Island 5.

“I was very happily surprised,” Sandhagen said about the matchup when speaking to MMA Fighting. “I was more worried that they were going to throw me someone down the list. They were going say ‘that was a really terrible fight on Cory’s end, he must not be as good as people think that he is so let’s get somebody to have a higher ranking and give him someone that’s more down the list.’ They said Moraes and I was like no way they’re going to do that. That’s great but I don’t think that they’re going to do that.

“My agent called me and said ‘they’re going to be sending you the contract soon’ and I was like wow this is actually happening. I was grateful.”

Getting a one-time title challenger and the No. 1 ranked bantamweight contender might seem like a gift to some but could easily be considered a curse to others, especially with Sandhagen coming off a loss.

Moraes is 5-1 in his past six fights including knockouts of Sterling and Jimmie Rivera, as well as a submission victory against Raphael Assuncao. He recently defeated Jose Aldo, who bizarrely went onto compete for the bantamweight title after losing to Moraes.

A quick look at Moraes’ resume shows an elite bantamweight with terrifying finishing power, but Sandhagen prefers to look at this fight as an opportunity to skip the line to the top of the division.

“I want the tough fights,” Sandhagen said. “Regardless of how my career goes, I want to say I fought the best guys and I didn’t skate around and playing the safe side of things. I’m here. I really believe I’m good enough to be here. I believe I’m good enough to be a champion and I really do believe that. Another hard fight is just what needs to happen.

“If I believe I can be the champ and that’s what I want, these are the fights that are going to happen. He’s very dangerous. He’s really technical. You can’t really rip him apart as far as there being too many thing wrong with how he fights. I’m excited for that challenge.”

As much as trash talk and tearing down an opponent has become almost normalized in MMA these days, Sandhagen doesn’t feel the need to insult Moraes in order to build himself up for this fight.

If anything, Sandhagen believes Moraes is just as good as advertised and he’s ready to test himself against a fighter of that caliber.

“I think Marlon’s one of the better guys in the UFC, not just in the bantamweight division,” Sandhagen said. “I think he very well could have been fighting for that bantamweight championship against [Petr] Yan and I think Marlon would have had a really good chance against Yan. If things would have worked out differently, he could be the champion right now.

“I know what I’m up against. I’m no fool. I know how good Marlon is. I’m not going to try to tell myself something differently just to help me sleep better at night. I know that I have one of the toughest opponents that I’m going to fight ever in front of me.”

It’s difficult to point to a blemish when it comes to Moraes’ skill set but if there’s one area where he’s struggled recently, it’s been the cardio and conditioning to push into the latter rounds of a fight.

After dominating Henry Cejudo in the early part of their title fight in 2019, Moraes faded late and he was ultimately finished by the Olympic gold medalist in the third round. He came out like a ball of fire against Aldo when they clashed this past December but Moraes’ output slowed significantly after the opening round.

That might seem like a hindrance for Moraes that Sandhagen could look to exploit but he’s not counting on it.

“I don’t want to bank on ‘hopefully Marlon gasses out’ because that’s not a good game plan. I’m going to stay engaged and do my very best to win every single round.”

Whether Moraes is hell bent on destruction, fighting with a tactical game plan or determined to win a five-round decision, Sandhagen is ready for anything.

The last thing he wants to do is depend on Moraes to come up short when they meet on Saturday in Abu Dhabi. Instead, Sandhagen prefers to thinking about the weapons he’s going to use to dismantle Moraes and win the biggest fight of his career.

“I think when I’m on and I’m focused and I’m sharp, it doesn’t matter who it is in front of me,” Sandhagen said. “It’s just a matter of being there and staying focused for 25 minutes. If I slip up even for a second, that could be it.

“When I’m on, I have confidence in every realm of my game. I’ve just got to tap into that, stay there and not let it go until the fight’s over. As long as I do that, I have the supreme most confidence in myself.”