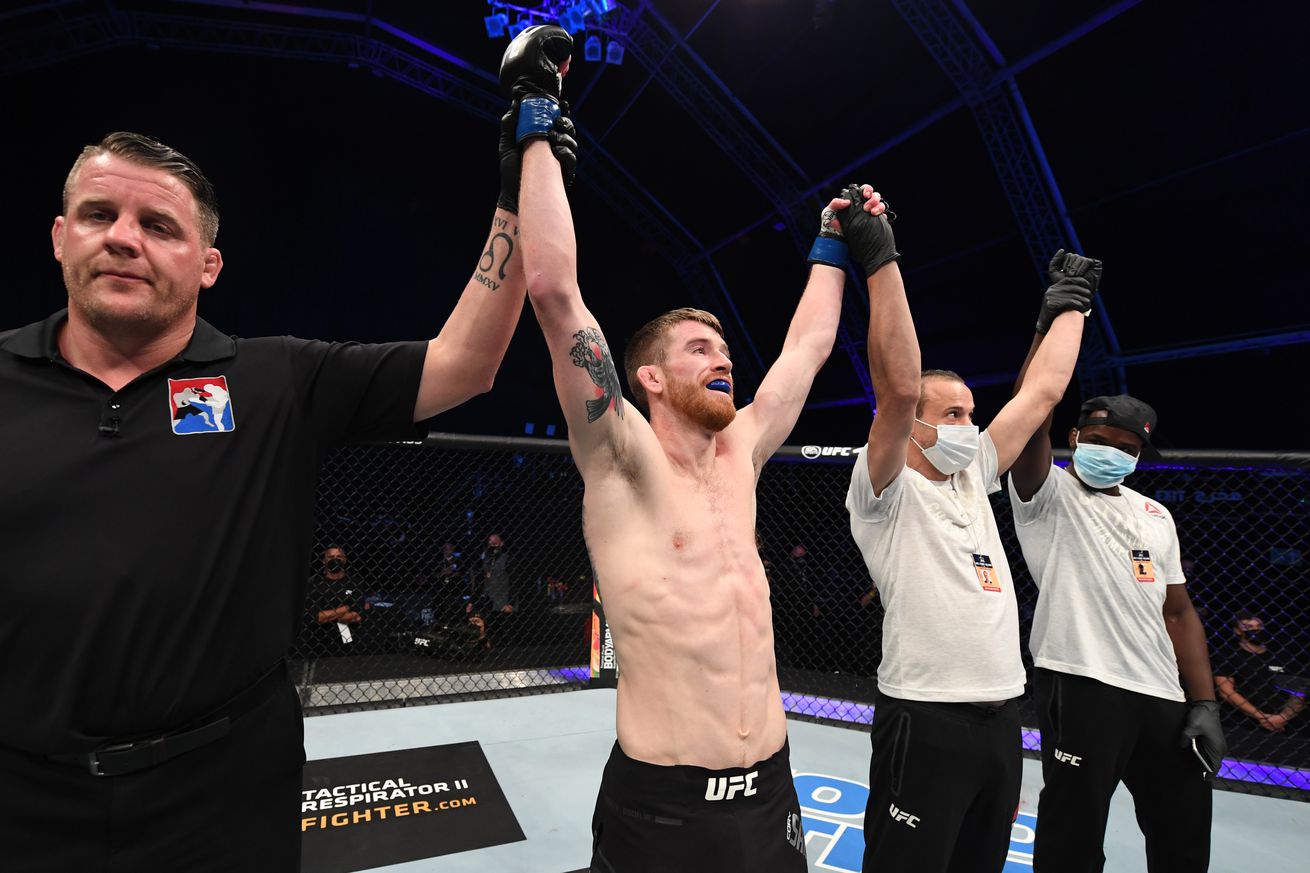 Cory Sandhagen scored a $50,000 bonus on Saturday, but UFC matchmakers should tip him extra considering he may have just done their jobs for them.

Heading into the UFC Fight Island 5 main event between Sandhagen and Marlon Moraes, the possibility existed that a Moraes win could muddy the waters at the top of the bantamweight division Aljamain Sterling’s presumed title opportunity is still yet to be announced. After all, Moraes holds a knockout win over Sterling, arguably should have been part of the vacant bantamweight championship bout at UFC 251 instead of Jose Aldo (the man Moraes beat by split decision at UFC 245), and was already once booked to face future titleholder Petr Yan in June at an event that was canceled due to the coronavirus outbreak.

Long story short, Moraes could have stolen Sterling’s well-deserved title shot out from under him with a strong performance against Sandhagen; fortunately for Sterling, the opposite happened.

It was Sandhagen who looked like the world beater as he took Moraes’ best shots while establishing the unorthodox rhythm that has made him such an intriguing contender. He looked well on his way to outlasting Moraes for 25 minutes, then apparently decided he wanted to call it a night early and instead blasted Moraes with a ferocious spinning heel kick that banged off of Moraes’ forehead. Moraes dropped to the mat and a few follow-up shots later, it was over, as were his chances of getting a second crack at a UFC title anytime soon.

Just before the fateful fight-ending sequence, Sandhagen was heard shouting, “His orbital’s broken,” a comment that may have psyched Moraes out and left him vulnerable to Sandhagen’s spinning sh*t. It wasn’t the only memorable call-out that Sandhagen would make.

Sandhagen was clear and concise in his post-fight interview, telling Dan Hardy that he only sees Frankie Edgar and two-time bantamweight champion T.J. Dillashaw ahead of him in the contenders’ line and that once he gets past them he expects to fight the Yan-Sterling winner.

See? Even coming off of the biggest win of his career, Sandhagen had the good sense not to mess with a Yan-Sterling matchup. We’ve been shouting for this one from the mountaintops for ages. Pay Sterling what he’s worth. Pay Yan what he’s worth. Make these guys whole and let’s keep this division moving.

So not only did Sandhagen clear a path for Sterling (who shouldn’t have to worry about Sandhagen jumping the line given that he holds a recent submission win over Sandhagen), he also set himself up for a big ticket fight with either Edgar or Dillashaw. Assuming Yan and Sterling fight before the end of the year, that leaves Sandhagen to wait until 2021 and Dillashaw just so happens to be eligible to compete again in January.

While it’s conceivable that Dillashaw could find an immediate title shot waiting for him should Yan not be booked in the next couple of months, that would be the ultimate slap in the face to Sterling and fans who care even the tiniest bit about the legitimacy of the rankings. Keep in mind, what Dillashaw is returning from is a two-year suspension after testing positive for EPO. I don’t care that he’s former champion nor that he never lost his title in the cage. He has to fight his way back and that path should go through Sandhagen.

As for the rest of the contenders, while I’m loathe to give any credit to my colleague Jose Youngs, he laid out a pretty solid plan that the matchmakers would be wise to follow.

The main reason why Dillashaw gets the Sandhagen fight instead of Edgar is because Edgar should be offered a dream fight with the greatest bantamweight of all-time Dominick Cruz. This is just an awesome matchup on paper that is somehow both a legends’ battle and one that impacts the current rankings. There’s no reason why these guys wouldn’t be interested in a bout that fans have long clamored for.

You have to feel for Moraes, who should have already had a second chance at UFC gold and now finds himself way back in the pecking order. The good news for him is that there’s another appealing top-10 name just itching to get back in the win column, fellow Brazilian star Pedro Munhoz. It’s a fresh matchup between two high-level fighters, which is reason enough to make it happen, but when you consider that it would also keep one of them in championship contention, then it’s a no-brainer.

The beauty of that particular set of matchmaking ideas is that it leaves the door open for the next tier of contenders to sort themselves out while Yan potentially works his way through Sterling, Sandhagen, Dillashaw, Edgar, or Cruz. Once the dust settles, maybe the likes of Chito Vera, Song Yadong, Sean O’Malley, Merab Dvalishvili, Cody Stamann, and Brian Kelleher will be ready to challenge for an upper echelon spot.

The matchmakers have options, is what we’re saying. Options that became a lot clearer due to Sandhagen taking care of business. So Dana White, Sean Shelby, Mick Maynard, and whoever else this may concern, if you’re listening, please make sure to leave a “Thank You” note for Sandhagen in his swank Abu Dhabi hotel room.

And announce the damn Yan-Sterling fight.