Should mixed martial arts employ open scoring? Whether to make judges’ round-by-round cards available in real time during fights is an idea which has long been discussed, and has been put to use in some places, most notably Invicta FC cards in Kansas.

For UFC president Dana White, though, the negatives outweigh the any perceived benefits.

As White sees it, there are few moments in sports as dramatic as the reading of the scores following a close fight — especially after a championship fight. And if the fans knew the scores as the fight was ongoing, it would rob them of the drama of the big call.

“When we do the fights I have an idea of who I think won or lost or whatever, but when I’m standing there with the belt, I don’t know what Bruce Buffer is going to say,” White said during an online chat with ESPN+ subscribers Tuesday done with Invicta color commentator Laura Sanko. “He doesn’t tell me anything. The judges tell him, the commission do their thing, they tell him and I’m standing there waiting to hear too so I’m just as blown away as the fans are. And I agree with you, it completely takes away the anticipation of who won the fight.”

Video: Is UFC’s debut on ABC that big of a deal?

White also sees another reason why fighters shouldn’t know the score during a bout — he believes it’s too easy for a competitor who knows he’s up two rounds in a three-rounder to go into cruise control in the final round, making for a boring time.

“If a guy knows that he’s up two rounds and you’re a professional fighter, you can absolutely stay away from a guy for an entire round and make the fight completely horrible,” White said. “If you already know you’ve got two rounds in the bag, guarantee if you saw your score up there, all I have to do is stay away from this guy for the next five minutes. That makes for a lot of bad third rounds.”

Whether or not open scoring catches on is out of White’s hands, as this is a commission matter. But at the end of the day, the UFC boss believes that no matter what system is in place, there are always going to be flaws.

“Its never going to be perfect,” he said “There are always going to be fights that absolutely drive you insane and piss you off, blow your bets, there will always be all these other things that go with the fight business. At the end of the day, watching the fight and waiting for the results are fun.” 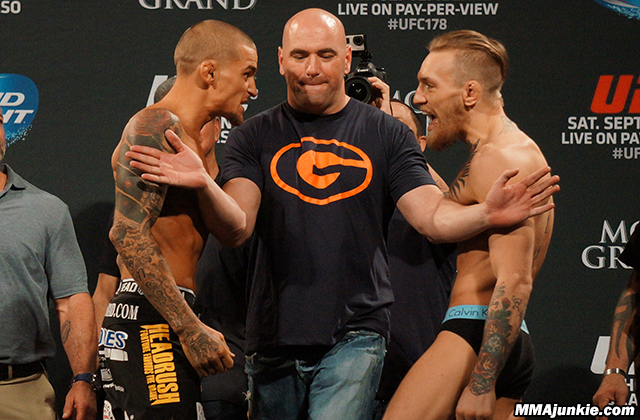