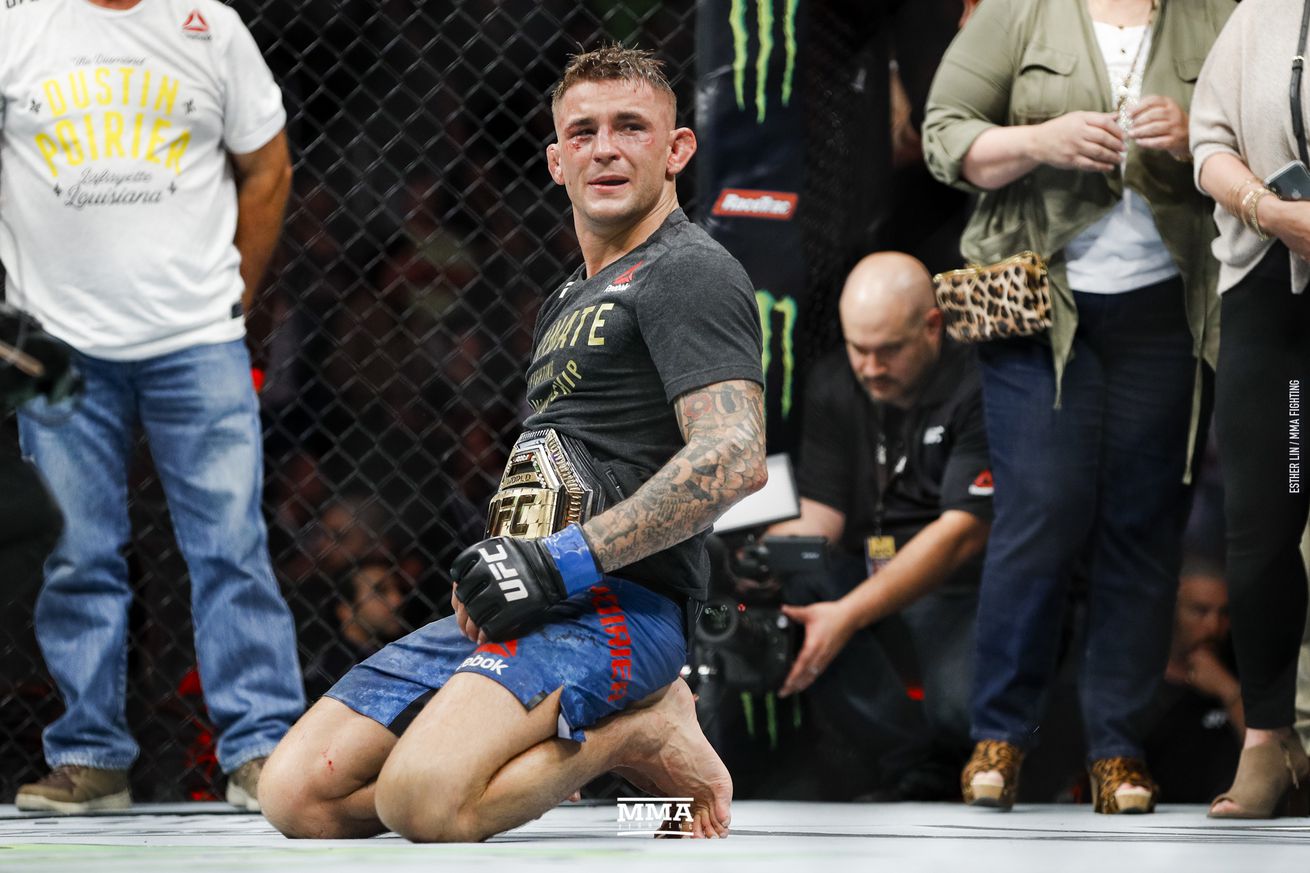 Dustin Poirier knew winning the interim UFC lightweight title was only one piece of a bigger puzzle he still had to complete but that doesn’t mean he couldn’t appreciate the accomplishment.

Prior to UFC 254, Justin Gaethje admonished Poirier for celebrating the interim title saying “he was done, he made it” while adding that “he still had the biggest mountain to climb” in reigning lightweight champion Khabib Nurmagomedov.

When he claimed the interim title back in May, Gaethje immediately removed it from his waist and laid it down in the octagon as he refused to acknowledge himself as a champion until he faced and defeated Nurmagomedov.

In response, Poirier recently explained why the interim title meant so much to him but in no way, shape or form did that prevent him from being totally focused and ready for the showdown with the undefeated Russian when they clashed in 2019.

“I knew that I had a piece of the world title,” Poirier said when appearing on Belal Muhammad’s podcast Remember the Show. “I’m not an idiot. I knew I was not the undisputed world champion but I was in a place of gratitude because of the years of work that I put in and put myself in the position to beat a current world champion at the time to win an interim belt. Max Holloway was a world champion and I earned that interim belt through years, 24, 25 fights with this company going back to the WEC days.

“I knew I wasn’t the undisputed world champion but I had a piece and I was very proud of that.”

Poirier believes Gaethje did himself no favors by just discarding the interim title he claimed while stopping Tony Ferguson’s 12-fight win streak and earning the eventual fight against Nurmagomedov.

He didn’t have to tout himself as the real champion of the division but Poirier says Gaethje could have shown some appreciation to show how his hard work finally paid off.

“For Gaethje to say that I thought I made it and I was holding a fake belt and him pushing that belt away in all those interviews, these last few months of him throwing that belt on the ground, I just want to tell everybody watching this — this is a life lesson,” Poirier explained. “This isn’t about fighting.

“You’ve got to understand and appreciate the position you put yourself in and be grateful for everything that you have because all these months of Gaethje walking around and throwing that belt down could have been months of him embracing the position, embracing the role that he put himself in. Not trying to be a meathead and throwing the belt on the ground and trying to say cool sh*t ‘I want the real one!’ Dude, we know. You have a piece of the real one right there on your shoulder that you’re throwing around and you’re disrespecting.”

While both fighters ultimately came up short in their bids to dethrone Nurmagomedov, Poirier was still proud that he put himself in a position to compete for the undisputed championship after claiming the interim title.

That can never be erased from his resume and Poirier was more than happy to hold that championship high because he earned it.

“I honor my work. That’s why I carry that belt with pride,” Poirier said. “I just want to put that out there. All those months of him being interim champion could have been great months if he wouldn’t have been throwing that belt on the ground.”