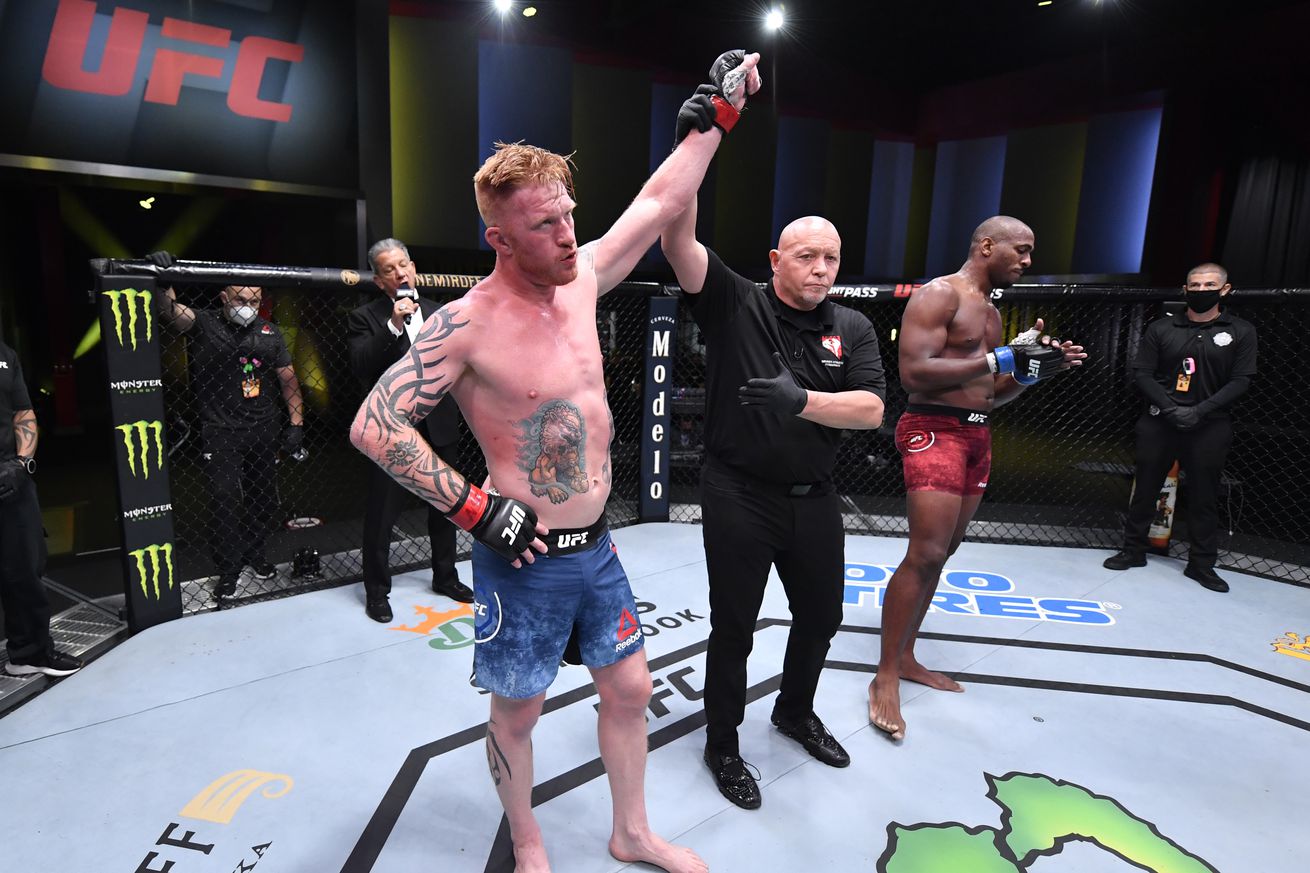 Veteran UFC middleweight Ed Herman turned off his social media notifications in the wake of his controversial win over Mike Rodriguez at UFC Vegas 10. Irate fans not only cursed him online immediately after his comeback win, but sent messages to his wife insulting him.

Then, he added: “You get in the cage in fight, or come and say that sh*t to my wife’s face. She’ll kick you in the face.”

As UFC President Dana White said recently, there’s a reason Herman’s nickname is “Short Fuse.” Friends and family have advised him to look on the bright side. He gave himself one week to cool down. But he wanted to clear the air in an interview.

First, Herman said, he wasn’t looking for a way out of the fight. He wasn’t acting for the camera after referee Chris Tognoni called time in the second round for a groin shot that replays indicated was a legal knee to the body. He believes he was doing what any fighter in his situation would do. What the referee did wasn’t exactly in his control.

“I was trying to defend myself the best I could being hurt, and as a fighter, your job is to survive and continue to fight as long as you can,” he said. “When you’re hurt, you’re on autopilot.”

After taking an elbow from Rodriguez in the first round, Herman remembers only bits and pieces of the actual fight. He’s still not clear on where exactly Rodriguez’s knee landed, though he rewatched the fight once and thought the strike in question was to his body. He doesn’t remember a shift in momentum, only that they were both tired. As for a toe he stuck in the cage that appeared to provide the necessary leverage needed to reverse and submit his opponent, he said the move wasn’t intentional.

“I was moving in reaction, being half knocked out and under duress, my instincts just took over,” he said. “That’s the kind of sh*t that happens in the heat of battle.”

And that’s the tough part of this particular win. Most people will probably remember the fight for Tognoni’s apparent error rather than Herman’s comeback. It’s just what The Ultimate Fighter 3 winner was hoping to avoid in the latter part of his career.

Going into UFC Vegas 10, Herman had two fights canceled due to fallout from the COVID-19 pandemic; for the latter, he was offered just $10,000 of his show money for a last-second scratch. He left Las Vegas on a three-fight winning streak at age 39. He’d like a few people to remember that.

“I feel like I just had the most epic comeback in UFC history,” he said. “I was hurt badly multiple times and was able to recover and come back and get that victory. Whether the ref gave me a break or not, who’s to say what would have happened?”

As one of the most tenured fighters in the UFC, Herman is accustomed to abuse from fans. He doesn’t expect it to extend to his family, however, or come from his colleagues.

When former middleweight champ turned commentator Michael Bisping tried to suss out what happened in a post-fight interview, Herman felt like he got thrown under the bus.

“Bisping I think is kind of a punk, because to my face, he acts like he’s my buddy, and then kind of came after me and made me look bad and talked some trash, so it’s kind of messed up,” Herman said. “If he wants to come out of retirement and throw the gloves on, we can do that.”

Herman has the same to say for fighters in his weight class who accused him of cheating, but he’ll leave names out of it for the moment.

UFC President Dana White said the call was one of the worst things he’d ever seen and paid Rodriguez his show money. He added Tognoni let Herman take far too much abuse in a barrage at the end of the second round.

“I thought Ed Herman owed that guy money or something,” White said. “Like what the f**k did Ed Herman do to this guy? Only Ed Herman could have pulled that off, cause that guy is so damn tough.”

Herman hasn’t spoken to anyone from the UFC since the controversial bout, and apart from a few post-fight words with Rodriguez, he hasn’t reached out. He appreciated Rodriguez’s message to fans not to blame him for what happened, even if many didn’t listen.

“I’m glad Mike got his win money,” Herman said. “But I’m not sorry for coming back and winning the fight. I went out there and mustered up what I had left in the tank and the heart that I have. A lot of people would have quit, as much as I was hurt a couple of times. People have to respect that.”

Herman knows he needs to make some changes in the gym to avoid taking as much damage as he did on the way to victory. He plans to heal up and may take the rest of the year off before determining his next move. He doesn’t want to be known as a punching bag with a long resume.

Herman is actually a supporter of instant replay in MMA. In his case, it might have led to a loss, or a second chance, as it did in a bout Tognoni oversaw this past Saturday that White also blasted.

But unless forced to stop, Herman will never quit in a fight.

“I’m not saying he wouldn’t have an opportunity to finish me, but I definitely would have been able to continue,” he said. “I’m going to continue if I can breathe. A lot of people fold up shop when the odds are against them. That’s why I’ve been doing this so long.”