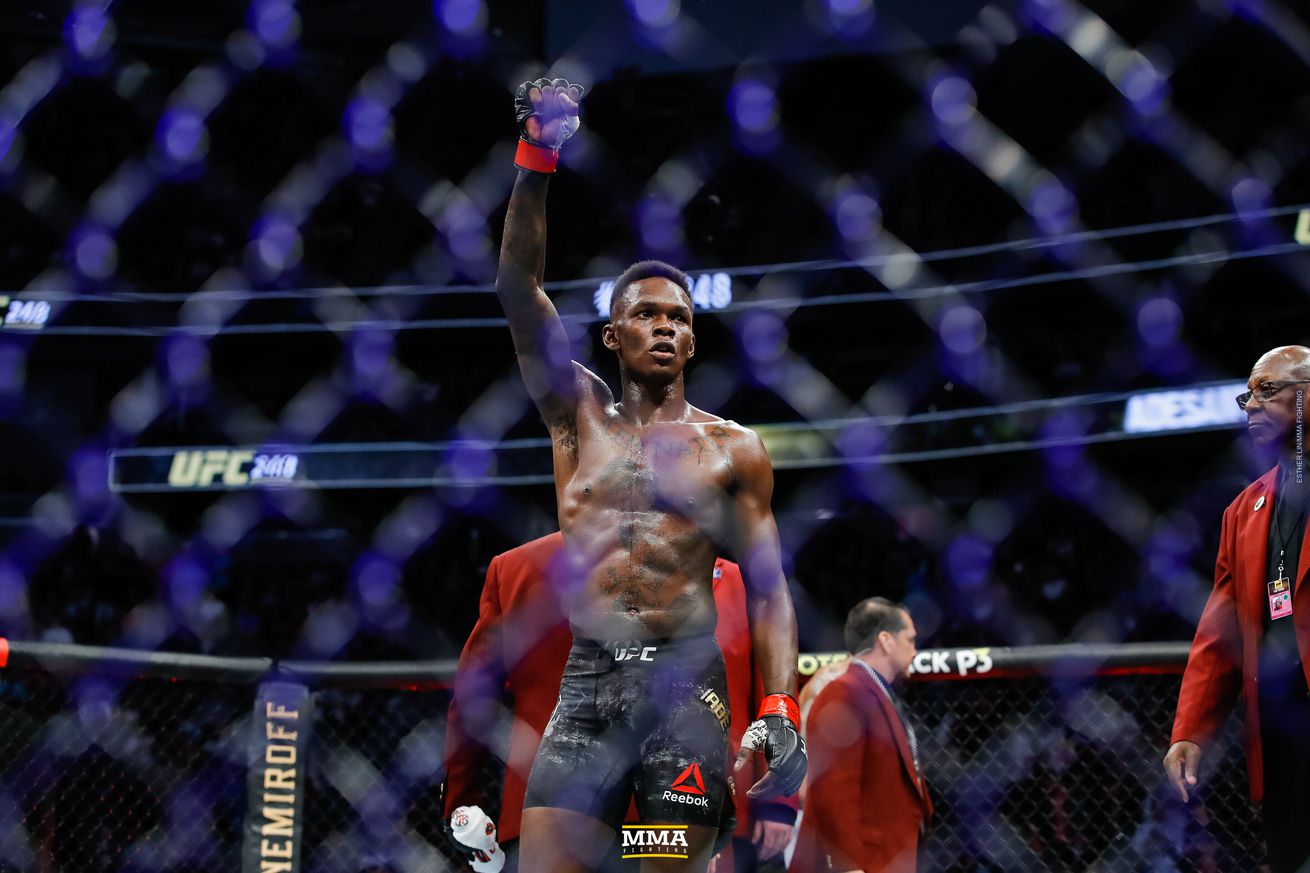 When Israel Adesanya sets his mind to a task it gets done and that apparently includes a superfight with longtime light heavyweight king Jon Jones.

Adesanya’s coach Eugene Bareman isn’t looking too far ahead, but acknowledged the growing feud between the two on a recent interview with Submission Radio. While he could do without the personal trash talk between the two UFC superstars, he does expect them to settle their differences in the octagon at some point.

“Yeah, bringing parents into it is like… I can’t vibe with this, to be honest,” Bareman said (transcription via Submission Radio’s Denis Shkuratov). “I can’t vibe with this whole thing. That’s why I try to ignore it. Especially if you’re telling me they’re bringing parents into it. It’s like, I come from a different era where you couldn’t talk like that about your opponent. Because if you did, you’d never make it to the fight. You’d be having the fight before the actual fight, and there would never end up being an actual contest in the ring.”

“I came from a place where if you say something on the internet, that’s just as good as you saying it to my face,” he continued. “For me, there was no distinguishable difference. But now there is, now the line’s been moved with these young guys. Like, the line has completely been moved. Where now it’s okay to do this and it’s okay to do that. But for me, I come from a different era. To me, you can’t, these guys, it’s too much for me. I don’t vibe with it, so I just stay out of it. So, it’s crazy. They shouldn’t be mentioning each other’s parents. But again, I don’t know where the line is, because in my day, you couldn’t do that, but nowadays you can. Like, these guys, their pride is different. Maybe they don’t have as much pride? The line is different. I’m just gonna stay out of it. I don’t know, they shouldn’t. They will one day—and I don’t know, but maybe one day they will regret talking about each other’s families. They shouldn’t be doing that, in my opinion.”

As for why Jones has been so passionate about butting heads with Adesanya despite recently making headlines over a public pay dispute with the UFC and a potential move to heavyweight, Bareman can’t make heads or tails of the situation.

He opined that Jones could just be laying down more groundwork for a bout that has been teased by both fighters over the course of the past year, and should that be the case he’s certain that Adesanya will accept a fight with “Bones” whenever the offer is made.

“I don’t know Jon Jones from a bar of soap, to be honest,” Bareman said. “There could be a side of him that just is insanely jealous that this new guy has come into the scene and is stealing a little bit of what he perceives as his thunder. That could be the fact that he’s just a really great businessman and he knows how to build fights and he knows how to make money and he’s aiming at long money, so it’s not necessarily a fight that’s in front of him now, he’s building a nest egg for him in a couple of years.

“It could be just that he’s a dick and that’s just his personality and that’s just the way he is. Honestly, it’s all speculation. But with Israel as set upon doing that fight, as long as he has the blessing of his team, his group of coaches, including me, he has got his heart set on doing that fight. It doesn’t matter where Jon Jones goes. If he goes to heavyweight, goes to light heavyweight, goes up and loses two fights, three fights, wins the next three fights, Israel has his heart set on that fight. So yeah, that fight’s gonna happen, I’m just not sure when.

“If we needed to fight that fight in the next six months, then I would be happy to do that, but again, that’s a team decision,” Bareman added. “That’s how we work.”

If not Jones, Adesanya has more immediate challenges ahead of him in his division. After dispatching of rival Paulo Costa at UFC 253, Adesanya mentioned several possible contenders including Jared Cannonier, who is set to fight former champion Robert Whittaker at UFC 254 on Oct. 24.

Bareman thinks that if both fighters are open to a quick turnaround, then Adesanya and Cannonier could fight before year’s end. Otherwise, there’s another light heavyweight champion that could be in Adesanya’s sights, the recently crowned Jan Blachowicz.

“If Cannonier didn’t want to turn around and fight, then Israel would definitely fight at 205,” Bareman said. “We’ve already had a little chat about that. He would be perfectly willing to do that. So much is just dependent on those results in the middleweight division.

“But yeah, if Cannonier wanted to wait longer because he didn’t want to turn around things really quickly, then maybe Israel can go to 205.”

Check out the rest of Bareman’s interview with Submission Radio below: