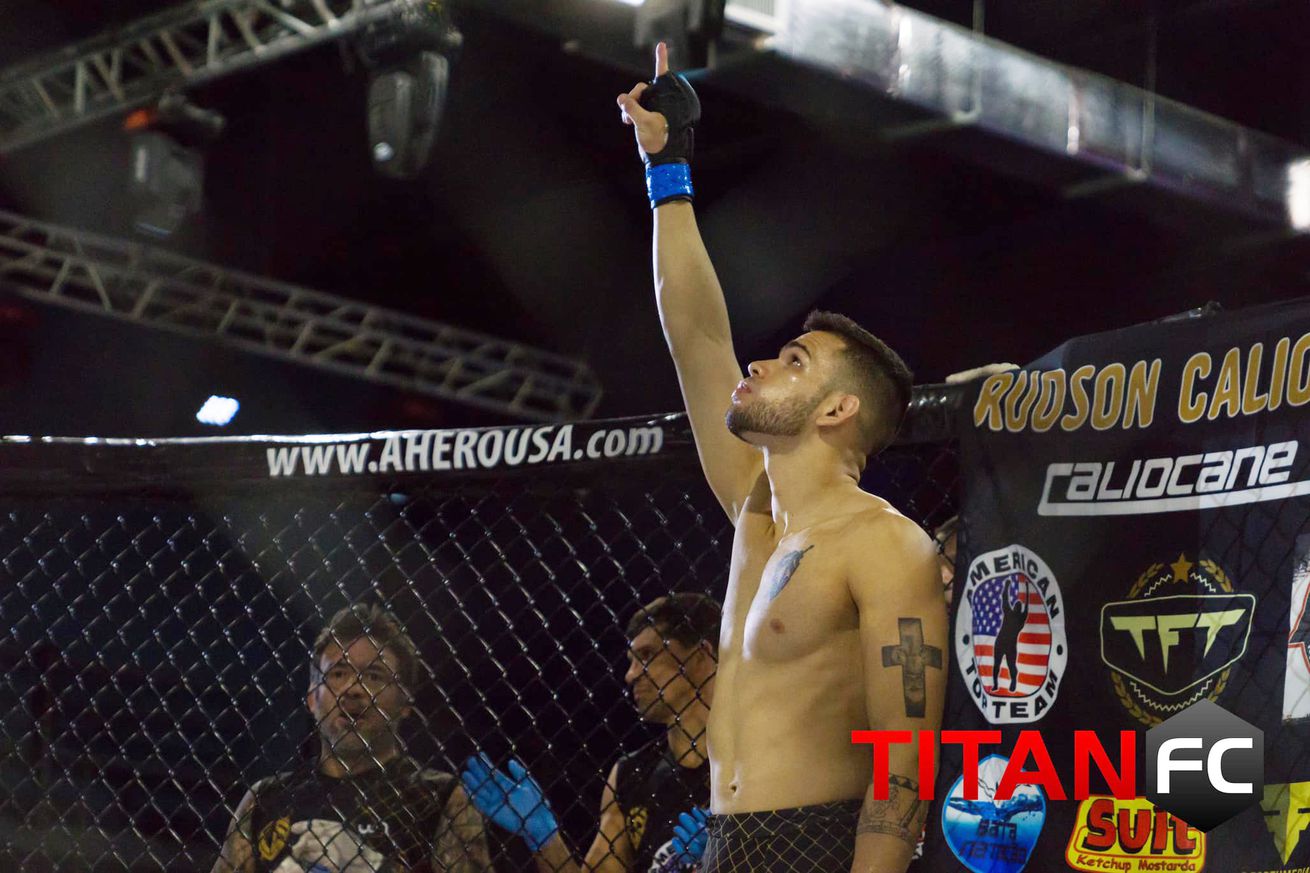 Rudson Caliocane was the Titan FC bantamweight champion when he decided he wanted to stay active, taking a fight in Brazil against 3-0 prospect Matheus Mendonca in Sao Paulo. That bout not only changed the course of his career, but nearly ended his life.

As he had done several times before in his career, Caliocane cut to 135 pounds during fight week for the event, Future MMA 9, on Oct. 19, 2019. He wound up losing a decision and didn’t feel right after the bout. He was rushed to a local hospital, where doctors discovered a brainstem hemorrhage that left him with one side of his body completely paralyzed.

Weeks afterward, Caliocane announced he had dropped his Titan FC title and had no idea “if or when I might be able to fight again.”

Twelve months later, the Brazilian fighter has his hopes up. But it’s been far from a smooth road back.

“I was very stubborn,” Caliocane laughed during an interview with MMA Fighting. “It was quite shocking.”

Caliocane says he “never” thought his MMA career would be over, even when multiple doctors said the same right to his face.

“Your injury was very, very serious,” one doctor told him.

“How about fighting?” Caliocane replied.

“No, you’ll never be able to fight again,” another doctor said.

What about the future?

“It’s going to be a miracle if you can walk again,” another doctor said. “It’s already a miracle you’re alive.”

“I got mad when they said that,” Caliocane remembers. “Five doctors condemned me. I would get off bed, lift my leg — that I wasn’t even feeling — and try to walk, but fall on the floor. My father came to help me and I said, ‘Get your hands off me.’ It was a pretty rough moment. Sh*tting my pants, having my farther shower me, my mother feed me. I went to a restaurant a week later to have some barbecue and couldn’t hold a fork. My friend had to cut the meat and give it to me.

“I spent days like that. I would only do things with left hands, like brush my teeth and stuff like that, and [my mother] would say, ‘Eat with your right hand, stimulate your right hand.’ It was rough, but thank god it’s over. I was happy with every little victory I had. I was able to run, to do jumping jacks, to jump ropes. I was stimulating that side of my body because I know that… it’s like a plant, if you water it it will flourish. That’s how I imagined my body.”

Caliocane was working with a physical therapist twice a week back in his hometown of Cachoeiras de Macacu, located 82 miles away from Tata Fight Team, where he trains today in Rio de Janeiro. The other five days, he kept repeating the exercises on his own.

The MMA fighter still feels some difference between each side of his body when he trains martial arts, or plays instruments three times a week at the church. That “probably” will never go away.

“I don’t think it will ever be 100 percent again,” Caliocane said. “I feel it when I’m playing guitar or the keyboard, things that are more delicate, and I still struggle depending on the situation. Sometimes my finger touches a key that isn’t supposed to, or I can’t play as fast as I could before. But I improvise. I don’t think it will get back to what it was before, but it’s not like I can’t give my best.”

Caliocane has to adapt when he’s playing instruments, but he said “thank god” it hasn’t affected him when he’s training jiu-jitsu, or other martial arts. Now, he’s cleared to train.

“My legs are almost equal,” he said. “But I still feel the difference in my upper body. I was working on the bench press the other day, and it would start to fail after I lifted six or seven times. My right side has no resistance, it’s like you turned the circuit breaker off and it simply stopped out of the blue. I keep pushing with the left (hand), but the right one kind of fails, gets soft. It’s crazy. I can’t really explain. I feel no pain, I don’t feel anything, it simply shuts off.”

The MMA talent has done dozens of MRIs over the past year, and a GoFundMe campaign created by Titan FC COO Lex McMahon was a huge help to pay bills. Caliocane taught some private classes to make ends meet when he moved to Rio with his fiancee Marcele, but won’t accept more than three or four students at a time as his main focus is to re-start his fighting career.

The former Titan FC bantamweight champion keeps his weight low, at around 156 pounds, and hopes to fly to the United States in January to resume his career. Caliocane says McMahon has promised him an immediate shot at the belt when he’s finally medically cleared to fight.

“That makes me really happy, but I have to ask it to be at 145, because I can’t make 135 again,” Caliocane said. “I can’t do sauna, bathtub, dehydrate or any of that. I can’t anymore. The doctor said I’m 50 percent more likely to have another stroke if I do it. I was already planning on moving up to 145, but my idea was to lose the last four pounds in the sauna, but my endocrinologist said I can’t. No way, so it’s only with a diet then.

“I’ll keep my weight low, 155 pounds, and cut down to 145 to fight. They are very big and very strong, but I’ll be faster. I’ll completely change my fighting style. I’ll be like (Demetrious Johnson) when he went to ONE.”