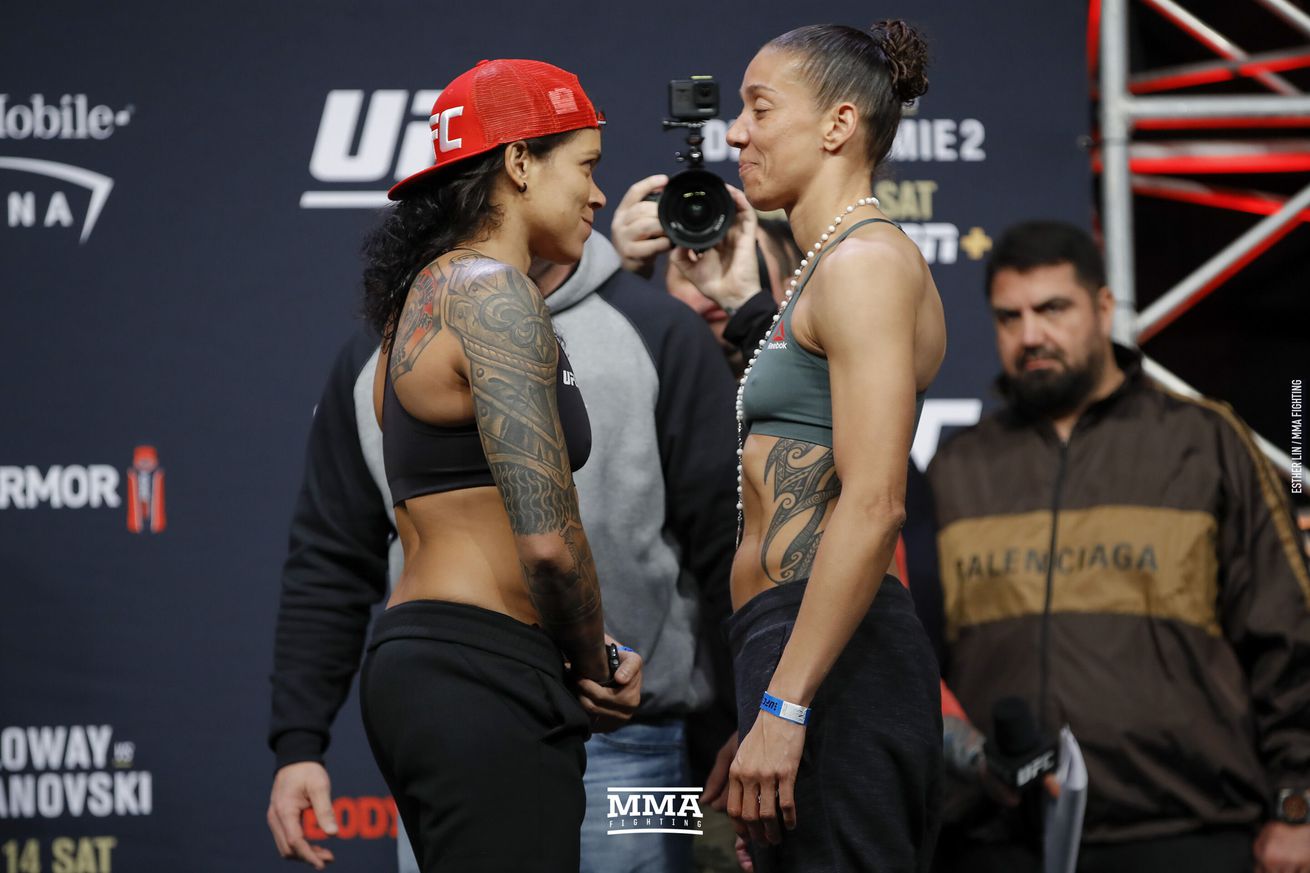 Germaine de Randamie wants another shot at Amanda Nunes and if she can’t get the job done in her third attempt, there won’t be a fourth, or any other fights in her future.

At 36, de Randamie proved she still has some tricks up her sleeve when she picked up the first submission win of her career, putting Julianna Pena to sleep with a nasty guillotine choke in the featured bout of this past Saturday’s UFC Fight Island 4 event in Abu Dhabi. With that, the inaugural women’s featherweight champion earned her first performance bonus since finishing Anna Elmose in May 2016 at UFC Fight Night 87.

“The Iron Lady” has had a long combat sports career, but her win over Pena is one that will stick with her for a long time.

“I always tell everybody, I’m 36 years old and I’ve been fighting for a very long time but I love this game so much,” de Randamie told MMA Fighting while appearing on What the Heck. “I want to learn, I want to become better. It’s nice knocking somebody out because that’s what I love to do, but this one is very special to me. This one will stay forever close to my heart.

“In my last fight with Amanda, I didn’t do so well on the ground and I know I’m better than what I’ve shown. I still made a lot of mistakes but there’s always space to learn. I got the submission and it was a beautiful memory.”

Prior to her UFC Fight Island 4 appearance, de Randamie dropped a unanimous decision to the dual champ Nunes in her first bid at the bantamweight title at UFC 245 in December. Still ranked No. 1 in the division, de Randamie finds herself in an interesting spot. The Dutch fighter and police officer was asked if she was frustrated in her position considering she just competed against Nunes less than a year ago.

“Not at all,” de Randamie said. “I love fighting and I could care less about the rankings. If you want to fight for the title, you have to earn that spot. One good performance might not get you that title shot. I’m still ranked No. 1 in the world and it’s my job to stay [there]. These are tough times, man. We’re blessed that we can fight and that the UFC makes it possible for us to do what we do.

“If I have to fight two more times (to get back to a title shot), it’s up to me to stay the No. 1 contender in the world and prove I still belong there. I was thinking about it, Amanda and I both came in at the beginning when Ronda Rousey came into the UFC. We were both in that time frame and we’re still on top of the game. Holly came in a year, or less later. That’s pretty cool. We ain’t that bad being these oldies.”

In this past Saturday’s main event, Holly Holm earned an impressive unanimous decision win over Irene Aldana in one of the best performances of her career. De Randamie and Holm met once before to crown the first promotional women’s featherweight champion at UFC 208. It was a fight that saw the former win a unanimous decision that was mired in controversy following a pair of after the horn strikes by de Randamie.

Following the event, fans and media members nearly unanimously suggested a rematch at 135 pounds between de Randamie and Holm.

“That’s always an option,” de Randamie explained. “I’m open to fighting everybody. I just want to put on exciting fights and give the fans what they deserve, just make it fun. I just want to fight everybody so everyone is an option.

“I don’t have to prove anything to anybody and I still have a lot of fans standing behind me. There are still people who have things to say about [the first fight], and that’s fine. Everyone is entitled to their opinion. Holly is an option. If the UFC wants us to meet again, we’ll meet again. It’s not up to me.”

Regardless of who her next opponent will be, de Randamie has her sights set on a third meeting with Nunes. Their first meeting took place nearly seven years ago at UFC Fight Night 31 where Nunes stopped de Randamie in the first round via TKO.

While the road to Nunes may be potentially a longer one, de Randamie is still hopeful it will happen. Nunes is scheduled to defend her 145-pound title against Megan Anderson at UFC 256. If, for some reason, Anderson is unable to make it to Dec. 12, de Randamie would be willing to step in if the opportunity would arise.

Whether it be for the bantamweight or featherweight title, if de Randamie stands across from Nunes once more, she is literally willing to put it all on the line for one last shot at “The Lioness.”

“If I’m able to and the UFC would say that’s the only shot you ever have to fight Amanda, I’ll take it,” de Randamie said in regards to facing Nunes for the featherweight title.

“If I get another shot at Amanda and she beats me, I’ll retire right then and there on the spot. I will forever stay second best. If she beats me again, I will retire on the spot. There would be nothing left to do. She’s the only one that beat me fair and square. No problem, she’s the true champion. If the third time I can’t beat her, it is what it is.

“If she beats me, I will retire with my head held high. I’m second best. She’s the best, but I still believe I can beat her. Every piece of me tells me I can beat her, and I have the utmost respect for the champ. But if she beats me again, that will be the end of my MMA career. I’ve done it all. I’ve seen it all. That just means I can’t beat her.”

De Randamie has goals and aspirations outside of the fight game when her time comes to call it a career. She wouldn’t compare it to the age-old pro wrestling title vs. career stipulation, but she stands by her words as a competitor.

“It’s not like she will end my career, but for what will I have to fight for then,” de Randamie asked. “Would I go back and fight four more times to get another shot at the title? No, I’m 36 years old. I want to have a family. I want to have a baby one day. I don’t know if I can go back and fight 10 more girls again to get to the champ. She’s the champ. Then I didn’t beat her.

“I’m a 10-times, undefeated kickboxing champion, I was the first 145-pound champ, it just means I couldn’t get the 135-pound belt. And that’s okay. I’ve had a beautiful career. There’s nothing to be ashamed of. Nothing.”