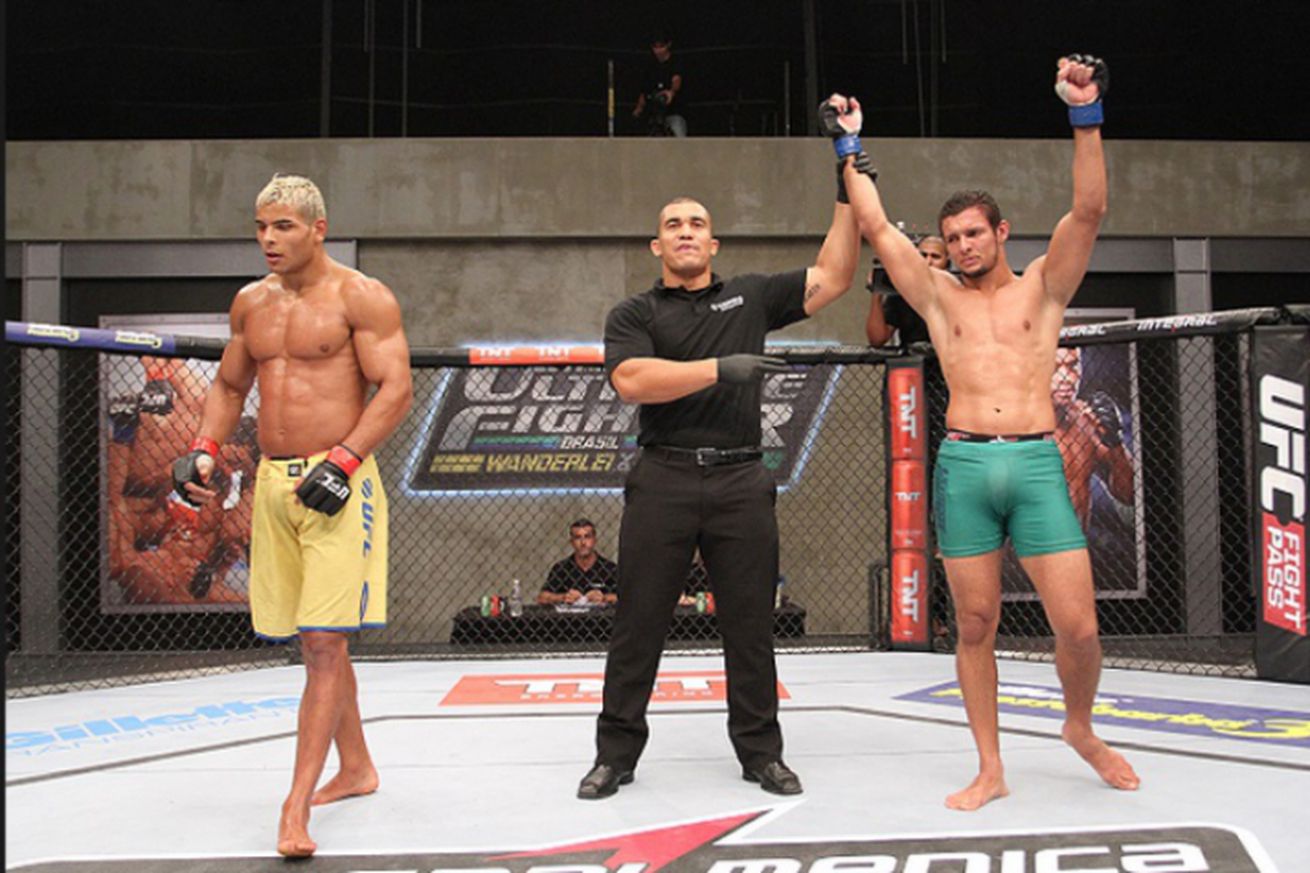 Even though Israel Adesanya vs. Paulo Costa marks only the second time in UFC history where two undefeated men meet for a championship belt, that doesn’t mean neither has tasted defeat in MMA. “Borrachinha” does hold an impressive 13-0 record going into the UFC 253 main event Saturday night in Abu Dhabi, and that zero still stands only because The Ultimate Fighter bouts are not considered official bouts.

The year was 2014 and Costa was one of 32 fighters looking for a spot on the third season of TUF: Brazil. The 23-year-old prospect was only 3-0 at the time, and submitted Jose Roberto Rocha in the preliminary bout to enter the TUF mansion in Sao Paulo. Costa was the second pick for Wanderlei Silva’s team, and “The Axe Murderer” decided to pair him up with Chael Sonnen’s first pick right away: Marcio Alexandre Jr.

The middleweight fight aired on the seventh episode of that season on April 20, a week after the episode that showed the infamous brawl between coaches Silva and Sonnen. Alexandre Jr., 12-0 in official fights at the time, was nicknamed “Lyoto” due to his karate background, and his standup ended up being the key to the victory.

Costa opened up with leg kicks and wasted no time shooting for takedowns, getting Lyoto on the ground and taking his back right away. Costa went for a rear-naked choke and though he couldn’t secure the finish, he had a clear 10-9 in his favor.

“Five minutes to fulfill your dream,” Costa’s cornermen told him after the opening round.

“This round was his, but the fight is yours,” a cornerman told Alexandre Jr. before what could be his final five minutes on the show.

Costa slowed down a bit in the second stanza, and his offense was basically attempting takedowns close to the cage but failing in every shot. Lyoto fired back with a few solid kicks, securing a 10-9 in his favor. With the fight tied, Costa and Alexandre Jr. needed an extra five minutes to find out who would advance to the semifinal.

Lyoto dropped Costa with a straight punch at the 1:15 mark, but Borrachinha quickly got back to his feet to then take Alexandre Jr. down for a brief moment. They spent the rest of the fight in the clinch, aside from Costa’s desperate takedown attempt that saw the exhausted middleweight collapse on the ground.

When the fight was over, Lyoto knew in his mind he had done enough to win. And he was right, as only one judge scored it 29-28 for Costa.

“We have to be fair, he has matured a lot since he left The Ultimate Fighter and evolved with his boxing and his mental game,” Alexandre Jr. said in an interview with MMA Fighting. “He’s more experienced and tough now. Borrachinha already was a great athlete before the show. He always had this shape, already was this strong, and had knockouts in his record, too, so he was always aggressive. I could feel his power in the fight, his ground-and-pound was violent, and he’s definitely evolved since then.”

Lyoto believes his fighting style was Costa’s kryptonite at the time, but blames Silva’s team for coming up with a bad game plan.

“I think the reason why Borrachinha wasn’t more efficient was the corner’s strategy,” Alexandre Jr. said. “Since I’m a striker that moves a lot, in and out, his corner came up with a strategy to clinch and take me down, ground-and-pound me. He did that in his first TUF fight, but the problem is, maybe that’s not the strategy he would have liked to use against me. He ended up listening to his corner and doing a clinch fight.”

The victorious middleweight suffered a left foot injury during the bout that almost got him cut from the program, but says coach Sonnen battled backstage to keep him on the show. In fact, Sonnen also gave him a mental push before the Costa fight, breaking the reality show rules to get Lyoto on the phone with the original Lyoto, former UFC light heavyweight champion Lyoto “The Dragon” Machida.

“He called Lyoto on Skype and we spoke for 10 minutes or so,” Alexandre Jr. said. “He wished me good luck and success on the show. That was surreal, my first time talking to my idol during a UFC reality show. One of the reasons that made me fight MMA was watching Lyoto since his Jungle Fight days and finding out that our martial arts, despite not being that relevant in MMA at the time, could work if well-adapted to the sport.”

“That season had great prospects and, to me, going there and running through them all to get to the final was gratifying,” he said.

Alexandre Jr. made it to the TUF: Brazil 3 middleweight final, but lost to Warlley Alves. Costa, on the other hand, had to work his way back to the big leagues by finishing five opponents in a row in the Brazilian circuit until he finally signed a UFC contract.

Borrachinha aims to dethrone “The Last Stylebender” on Fight Island on Saturday, and Lyoto is cheering for him, hoping “he brings the belt back to Brazil.” That said, he doesn’t foresee an easy task for his countryman.

“[Costa] likes to close the distance, and his Achilles’ heel is lengthy fighters that fight from afar, that like to move around the cage,” Alexandre Jr. said. “That’s what Uriah Hall did in the first round, that’s what I did in the second and third rounds, and that’s the path I think Adesanya will go against him. And, in that situation, I believe Adesanya becomes the favorite.

“What makes Borrachinha a bit vulnerable as time goes by is the fact that he’s too strong for the division. He carries too much muscle mass and tends to gas as the fight progresses. That’s what happened against (Yoel) Romero, against me, and it could happen against Adesanya, too, with Borrachinha getting tired after the first and second rounds and Adesanya starting to have an advantage in the fight.”

Lyoto has great things to say about his former opponent and sees great evolution since the day they fought in Sao Paulo. Yet, Costa’s previous UFC wins over Hall and Romero show he “still has flaws in his game,” like the fact he gets hit too often when facing precise strikers or gassing in later rounds.

“That’s a flaw we saw he had yet to fix against Hall, and now we’ll see against Adesanya,” he said. “He fixed that, or there’s a hole to be worked on.”

Alexandre Jr. went 0-3 in the UFC between 2014 and 2015 and tried to get back in the promotion through the Contender Series in 2018, but wasn’t signed despite a quick first-round submission over Leonardo Silva. With a 6-2 post-UFC record, “Lyoto” hopes to score a trio of wins under the Taura MMA banner and ink a deal with a major promotion in 2021.

“I know I’m ready for any big intentional promotion and I’ll start it with Taura,” Alexandre Jr. said. “They are signing a lot of big names and I think that will get me back in the UFC — but I wouldn’t say no to any other promotion that gives me a chance to become a world champion. The doors are open for Bellator, ONE and PFL. They are great promotions and I’m sure I’ll show how good I am and become champion.”