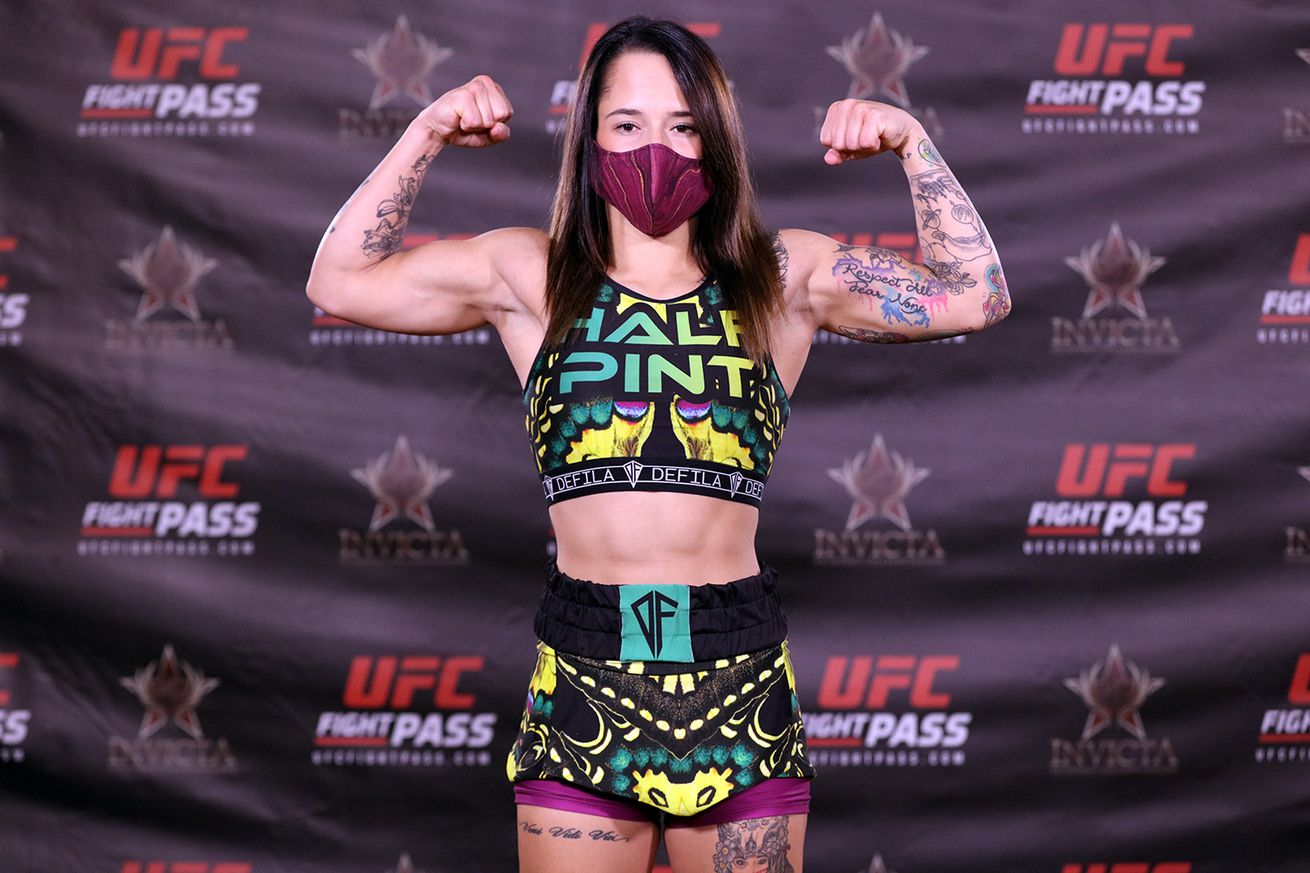 There is a brand new Invicta FC atomweight champion, and her name is Alesha Zappitella.

“Half Pint” took on Ashley Cummins for the vacant title in the main event of Invicta FC 42 in Kansas City on Thursday night. Zappitella was down on two judges’ scorecards after three rounds, but the momentum of the fight was beginning to change.

In the fourth round, Cummins locked in a guillotine choke and it looked tight. Zappitella was able to get out of danger and get on top. She would work for a Von Flue choke and scored the tap to become the new atomweight champion.

Alesha Zappitella with the Von Flue to secure the atomweight title! #InvictaFC42 pic.twitter.com/PUMmvc1CEz

Lisa Verzosa and the returning Raquel Canuto battled it out in the co-main event with both women landing big shots early on. Canuto certainly didn’t look like she had been out of MMA competition for three-plus years as she stayed very relaxed. In the end of a back-and-forth opening round, two judges gave the opening round to Verzosa.

The second round began very evenly matched with both women landed shots. Canuto landed a hard right hand and a body kick, while Verzosa answered back with a body kick of her own. In the final two minutes, Verzosa ate a hard leg kick from Canuto but was able to answer with a straight right hand. Canuto lands a jab as Verzosa is circling, using different angles to throw Canuto off. With her nose bloodied, Canuto moved forward as the round came to an end, but all three judges gave Verzosa the second.

Canuto begins the final round knowing she needs a finish to win. Verzosa continued to make herself a moving target while Canuto moved forward landing kicks and throwing hard right hands. Canuto lands a pair of high body kicks before shooting for an unsuccessful takedown. The bantamweights slugged it out for the final 15 seconds. Canuto landed a hard right hand that caught Verzosa’s attention as the fight came to a close.

Verzosa would win the bout via split decision.

Former Invicta atomweight champion Herica Tiburcio returned to action for the first time since a May 2017 win over Tessa Simpson at Invicta FC 23 to face Jessica Delboni in the featured bout. Delboni used her speed advantage to wisely pick her shots through most of the opening round. Tiburcio would look for a late takedown but Delboni defended to earn a 10-9 on all three scorecards.

The second round saw more of the same from Delboni. In the final two minutes, Tiburcio landed a counter combination, but Delboni was able to continue her crisp standup to seemingly win the round. However, Tiburcio was able to turn up the heat a little bit more before the horn sounded and was able to pick up a 10-9 on one of the judges’ scorecards.

Tiburcio continued with her aggression and forced Delboni against the fence in the final round. Delboni would stay active with knees and foot stomps to force a separation. Both women would exchange big punches as Delboni settled herself down. Delboni would turn it on late with a pair of body kicks and ended on top in a scramble as the horn sounded, which led to a unanimous decision win.

To kick off the card Victoria Leonardo earned a victory over Liz Tracy, while Helen Peralta swept all three rounds against Jennifer Chieng.

Check out the full Invicta FC 42 results below: