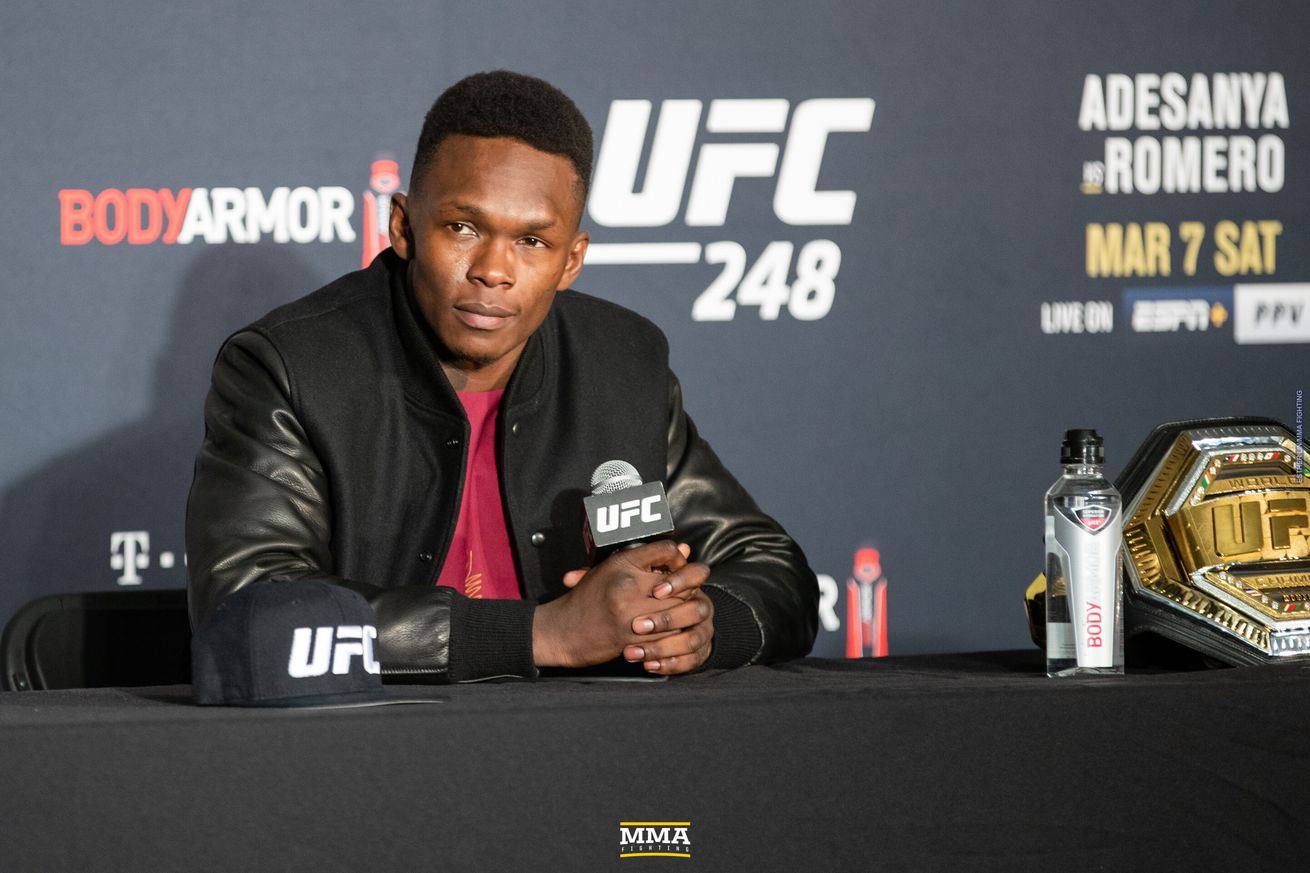 For all the bad blood that seems to exist between Israel Adesanya and Paulo Costa, the UFC 253 headliners ran into each other at the event’s host hotel this week and departed without any kind of incident.

Video of the encounter almost made it seem like Adesanya and Costa are somewhat cordial with each other. That’s a far cry from the moment Adesanya won the UFC middleweight title, climbed to the top of the cage and aimed both of his middle fingers at the cageside Costa.

According to the middleweight champ, the run-in with Costa was completely incidental, and he approached his opponent to size him up. The way he figured it, there didn’t need to be any kind of crazy altercation because cameras were filming.

“What happened was I walked past him, and you’ll see in my [Instagram] story, and I checked him and what did he say — he said, ‘You good?’ I said I’m great,” Adesanya said about the incident during UFC 253 media day on Wednesday. “Then he muffled something, and I doubled back and I went over there to kind of check his energy.

“I went there, sized him up, patted him on the shoulder to feel how dense he is. I shook his hand cause I wanted to feel the kind of pressure he put on from a guy who said, ‘I would not shake his hand when I beat him.’ Cause he’s just like one of those dogs that barks behind the fence, but when the fence opens up, he’s just kind of like real timid. So I could feel that off him, it’s the energy.”

Adesanya even made an off-handed remark that he thought would almost assuredly get a reaction out of Costa. Instead, he was instead surprised by the Brazilian’s demeanor.

“I went to check his energy, and I even said you look skinny,” Adesanya said. “I expected him to take that the wrong way, but yeah, him and Wallid [Ismail] were just giggling like little girls. So I already knew what I already knew.

“I just confirmed that they were going to submit to me. Yeah, he didn’t check out when I checked him.”

Assuming Adesanya is able to carry out his plans to beat Costa decisively on Saturday, the middleweight champion will then turn his attention to another pivotal fight in his division in October.

At UFC 254, former champion Robert Whittaker will face off with Jared Cannonier in a clash that could potentially determine the next No. 1 contender at 185 pounds.

While Adesanya already defeated Whittaker last year, he’s keeping a close watch on this matchup because he truly believes he’ll be scouting Cannonier as the next person coming for his title.

“After I pick up this victory, I already kind of set the stage for the next one for a guy I have in mind – I want [Jared] Cannonier,” Adesanya said.

“I’m not looking past Paulo. I’m just setting up the stage because I feel like Cannonier’s going to destroy Robert Whittaker. He’ll dominate him. So I already told Cannonier he does that, he’s next in line.”

It’s a bold prediction from Adesanya, but he’s touted Cannonier as a future title threat for quite some time.

The middleweight contender, who previously fought as big as heavyweight, has run roughshod over his first three opponents at 185 pounds, including a TKO victory against Jack Hermansson in his previous outing. Whittaker might be the former champion, but Adesanya expects Cannonier to emerge with a victory.

“Cannonier’s the dark horse of the division,” Adesanya said. “He’s a guy we’ve had our eye on for a long time because when he dropped down to middleweight, he’s become a killer. He’s become a terrorizer, and also just who he is as a person.