Rivera, a professional mixed martial arts fighter from Newton, is demonstrating to two dozen men and women how to fend off an attacker while lying on the ground. The technique is particularly important because the people gathered here on a recent Tuesday afternoon are no ordinary students – they’re cops from Elmwood Park, here at their chief’s orders to learn how to better handle themselves on the street.

“When someone knocks us down, we go to the hips for control,” Rivera yells, spinning himself like a dead bug on a tile floor as Foligno wheels left. “Keep your hips nice and loose. Use your feet! Extend your legs for power and push him off!” The officers study Rivera’s movements, then break into pairs to practice. For the next two hours, they’ll do this over and over as Rivera shows them how to throw a right hook, escape a headlock or wrap themselves like a boa constrictor around a resisting suspect.

They’re here because Foligno is among a collection of law enforcement leaders who think they’ve found at least a partial solution to the string of controversial police killings wracking the nation in recent years. Teach officers to restrain suspects properly with proven physical techniques, they hope, and cops will be less prone to reach for a gun or misuse the kind of methods that killed George Floyd in Minneapolis or Eric Garner in New York.

“We have to do better – we’re causing ourselves to escalate to deadly force because we’re not trained properly,” Foligno said in an interview from his office last month. “The purpose of our program is controlling people, keeping them under control and taking them into custody safely.”

Similar theories have floated around law enforcement in recent months as the profession and the nation as a whole wrestle with the high-profile deaths of Black Americans taken into custody. 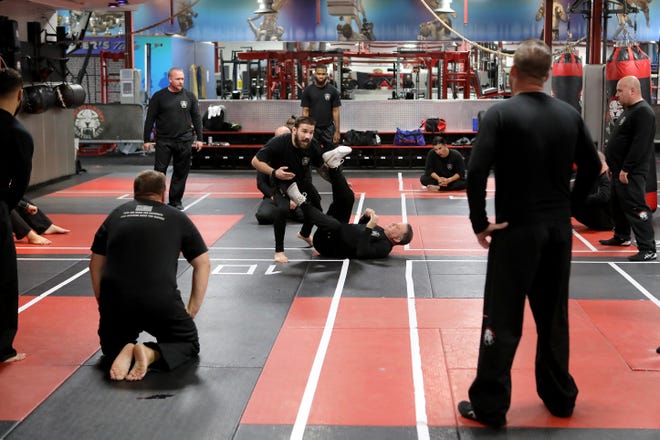 Foligno is putting it into practice through an agreement with Rivera and Tiger Schulmann’s, the Mola Boulevard facility where the MMA fighter teaches and Foligno has trained for years. For the last two months, Rivera has led a pair of classes every Tuesday and Thursday for borough cops, taking them through the foundational principles of Brazilian Jiu-Jitsu, a grapping art made popular by Ultimate Fighting Championship matches, as well as boxing, the millennia-old art of hitting without getting hit.

But Rivera isn’t training officers for cage matches. He’s preparing them to subdue a fiercely resisting suspect without endangering themselves or permanently hurting the other person. That means less “rolling,” or free grappling, and more drills that reflect scenarios officers see on the street.

“When these cops learn how to defend themselves and practice all this, they bring a different confidence to a situation where they know they don’t always have to resort to the gun,” said Rivera, a ranked fighter in the UFC’s bantamweight division. “The biggest thing is solving a situation without using deadly force.”

Brazilian jiu-jitsu training could be instrumental to police reform | Opinion

The classes are free, and Foligno said he requires every officer to attend at least three per month. Missing classes without a legitimate reason is the same as skipping a shift, Foligno said, and officers would be disciplined accordingly.

Employees check temperatures at the door, and the cops train after work with their shift-mates to reduce the likelihood of spreading the novel coronavirus if someone falls ill.

Kelly McCann, a security consultant and owner of the Virginia-based Kembativz Brand, was glad the program didn’t rely on what he called the outdated curriculum many police academies teach.

“Any qualified instruction in jiu-jitsu, wrestling or boxing is absolutely a smart thing,” McCann said. “If the guys kind of like it and are learning stuff – that’s all good. Because it’s not the same old defensive tactics they’ve been fed.” 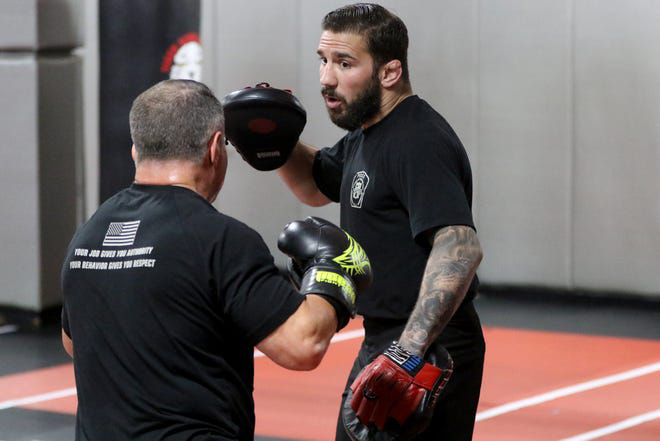 Assemblyman Brian Bergen, a Morris County Republican, proposed a bill this summer tripling the amount of hand-to-hand training police academies teach recruits. A West Point graduate and combat veteran, he lauded Foligno’s program as an example of how New Jersey should train its cops.

“I’m impressed and happy that someone is doing it,” said Bergen, whose bill would also require members of local, county and state law enforcement to do about a week’s worth of self-defense training every year. “It makes me feel good that there are departments out there that are taking this seriously. We want to emulate them.”

The bill’s Democratic co-sponsor, Assemblyman Gordon Johnson, said the measure stalled this summer as New Jersey lawmakers turned their attention to the state budget. Still, Johnson, a former Bergen County sheriff, said he intends to push the legislation this fall despite concerns about how expensive it might be.

“That’s the big question,” Johnson said. “You take [an officer] off the street for a while to do this, there’s a cost to do that. We’ll figure that out … I don’t think it will be that much.”

New Jersey’s Police Training Commission, which sets standards throughout the state, is considering a separate proposal to double the amount of time academy recruits spend on self-defense, giving them about 80 total hours, according to spokesman Peter Aseltine of the Attorney General’s Office. It would require current cops to take an annual defensive tactics course.

“We can’t afford to sit around and wait for the attorney general to wave his magic wand and get better training for cops,” Rivera said. “Cops need to be able to defend themselves and they need to be able to save lives. This chief is telling you, ‘I’m not waiting for anybody.’ That’s positive, that’s progressive, that’s forward-thinking. That’s getting it done.” 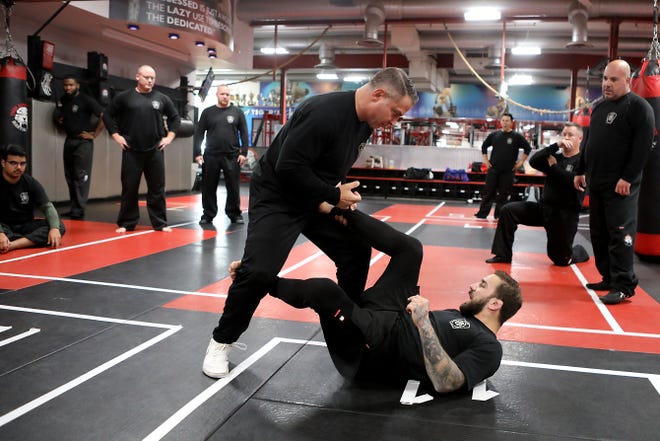 Foligno, 52, is a fireplug of a man who said he grew up wrestling and weightlifting before taking up mixed martial arts nearly a decade ago. As a devotee of those physical disciplines, he said he gets frustrated when videos surface of errant arrests by poorly trained officers that turn deadly.

He pointed to the June fatal shooting of Rayshard Brooks in Atlanta. Brooks allegedly fought with cops during a drunken driving arrest, took one of their tasers and turned it on the officers before they shot him.

That didn’t need to happen, Foligno said. And it might not have if the cops were better trained in grappling, restraining and arresting people, according to the chief.

But boosting the amount of training cops get costs money. And that conflicts with the cry to “defund the police” that has taken root in some political circles and led to proposals to cut police budgets in New York City, Los Angeles, Seattle and Baltimore County, among others.

The Elmwood Park police do not face similar financial straits, Foligno said. But his program won’t dent his budget because Rivera and Tiger Schulmann’s have agreed to offer the sessions for free.

“We are for the guys in blue – these people put their life on the line to keep us safe,” said Schulmann, a 58-year-old Florida resident who runs a constellation of training facilities in New Jersey, New York, Pennsylvania and Connecticut. “Police have to continuously train, and I don’t want an excuse to be that they don’t have the money to do so. They protect us, we want to help them.”

The officers get more than a free workout. Foligno said they can bank hours they spend in the gym and use them toward future days off. This keeps the department from paying out overtime to officers who would be needed to cover missing shifts, as it must during in-service training.

The officers, several of whom said they had not done mixed martial arts before, have reacted enthusiastically.

Bernadette Yates, a newly promoted detective and the only woman in the class, said she hadn’t trained like this since the police academy a dozen years earlier. The in-depth study she’s doing now would have helped her several times in her career, she said, which included stretches at the Newark Police Department and the Middlesex County Sheriff’s Office.

“Nowadays a lot of cops are scared to go hands-on, and I think that’s a problem,” Yates said as she wrapped her hands ahead of the boxing class. “This is very important. Because it’s one thing to go through the academy and train for six months, but after that who says you have to keep up with it? I’m 12 years in and I’m just now doing it again.”