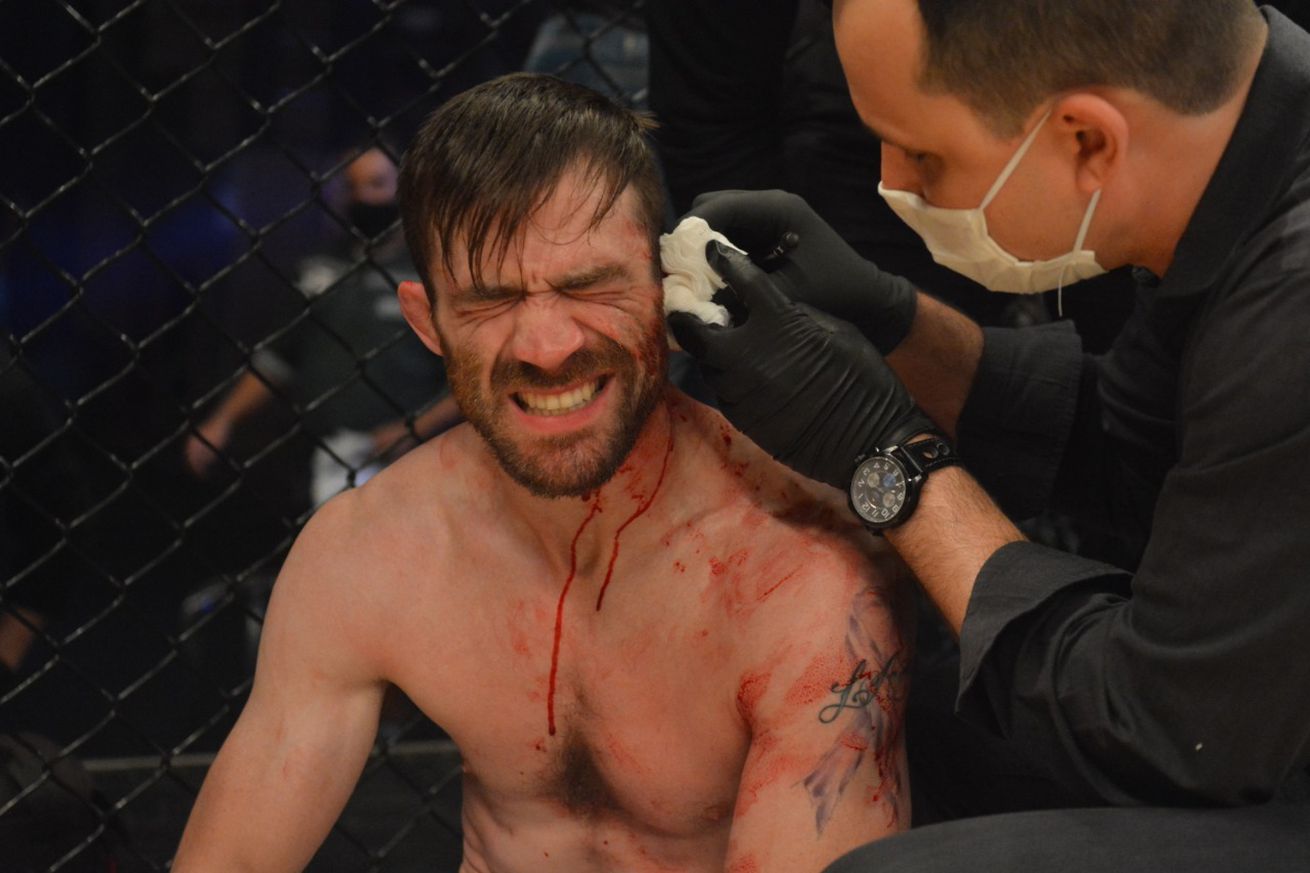 Johnny Campbell’s most recent fight officially lasted less than 30 seconds. But it’s one fans will likely talk about for a while.

They may not instantly recognize the 10-year veteran’s face, but they’re probably familiar with Campbell’s ear, or what’s left of it, after he suffered a grisly loss at Taura MMA this past Friday in Rio de Janeiro. The organ was nearly torn from his head, prompting a quick stoppage in a vacant interim bantamweight title fight against top prospect Ary Farias.

Days later, MMA Fighting caught up with Campbell to get an update on his condition and get his perspective on how the gruesome scene played out.

“I didn’t entirely feel it,” Campbell said on What the Heck. “If you watch real close, I throw a low kick at his calf, it half-connects, he blitzes at that time and I weave my head as he throws a right hand. It’s like, my head is coming kind of up as his fist is going down and it just, like, pulled my ear off basically. I felt a very sharp hit. It was like, ‘Wow, why did that just hurt so bad?’ I kind of saw the punch coming and it was like, ‘We’re gonna get hit.’

“If you watch in the video, he hits me with a couple of shots that are kind of grazing, and then I stumbled backwards and lose my balance because my body was like, ‘Holy f*ck!’ My mind was not totally focused on the feeling of pain, but it was like, that smarted way more than it probably should have. I don’t know why. I wasn’t rocked, but it was like, ‘Yikes, that was sharp.’”

Campbell, 33, recalls bouncing off the cage and then shooting in to grapple with Farias, a multiple-time jiu-jitsu champion. The Brazilian took Campbell’s back and fired an elbow that Campbell remembers striking the back of his head, because he immediately complained to the ref about it. That’s also how he knew it wasn’t the elbow that damaged his ear.

With Farias working for a choke, Campbell was more concerned about avoiding a submission, seemingly unaware of the flesh hanging off the side of his head.

“A part of me knew something’s not right on the left side of [my] head, but my mind was focused on the world champion on my back,” Campbell said. “All I can remember thinking is he’s not nearly as strong as I thought, I figured if he’s on my back he’s just gonna rake my face and crush my head and it was like, ‘No, he’s not doing that.’ He puts on a nice, tight body triangle, I immediately get to my knees, which is generally not an easy thing to do when a f*cking world champ is on your back. I’m defending good and then I see the blood on the floor and I’m like, ‘Man, he cut me with that f*cking punch? I did not think that was gonna hit that hard, how did that happen?’

“And the ref looks at me a little bit awkwardly, and I’m continuing to defend and then the ref comes in and it’s like, ‘He’s gonna check this cut? How bad could this cut really be? That shot was not that hard, this is kind of weird.’ And I can still tell something’s not right, but I don’t know what it is. Then he starts waving his hands off before he even says anything else.”

At first, Campbell was frustrated with the referee’s call. After all, he’d taken this fight on less than two weeks’ notice as a replacement opponent and had to scramble to get his medicals done, book flights, and make the weight. He hadn’t gone through all that to lose by cut stoppage in under 30 seconds.

It took Campbell a few seconds to realize what had happened and even then, he seemed somewhat surprised that he wouldn’t be participating in the usual post-fight rituals.

“It was tough,” Campbell said of his fight preparation. “So tough and now it’s been, like, 40 seconds and he is stopping the fight. I’m like, ‘What is going on?’ He says, ‘Your ear, it exploded.’ And I’m like, ‘Huh? My ear?’ Then it kind of comes in, ‘Oh, that’s what that feeling is on the side of your head. Your f*cking ear, is it hanging off right now?’

“In the video you can see I reach up and kind of cup it real quick and it was hanging off my f*cking head. It did not really hurt all that bad necessarily, but It was just, sh*t I guess we can’t continue. Ary came over, he was f*cking cool as f*ck, we bowed and whatnot, it was good times. They immediately got me out of there, I’m like, ‘Wait, I don’t even get to see him get the belt on?’ They’re like, ‘Nah, you have to get the f*ck out of here. We have to sew that sh*t up.’”

Just another day at the office ️ It may not be obvious in this photo but I’m so incredibly blessed! I had an amazing experience in Brazil fighting for a world class organization @taura_mma ! I have behind me some of the greatest fans that mixed martial arts has to offer! I didn’t get to display my skills the other night; but life always happens to make us the best version of ourselves. It’s our job to stay grateful and focused. This experience will only strengthen my drive! I’ll be back in the cage as soon as humanly possible. Even if i have to cut these damn ears off myself. The doctors refused to do so Thank you everyone for the support and love I’ve received. Im looking forward greatly to getting back in that cage. Doing what i was born to do. Fight and perform Thank you #CupcakesNation

Campbell estimates he needed 20 stitches to treat the injury. But otherwise, he’s recovering fine. He assumes there’s still dried blood that pooled in his ear, and while his hearing was affected in the moment, he’s no longer having any issues with it.

Once the injury fully heals, Campbell expects the ear to be new and improved.

“It feels pretty awesome,” Campbell said. “It feels a little bit swollen, that’s like the only thing so I think once the swelling goes completely down it’s almost going to look better than before. Both my cauliflower ears were pretty bad but this one was somewhat grotesque looking. It didn’t even look like cauliflower ear, it looked like it was almost mutilated, so I think it’s gonna actually look better.”

More than anything, Campbell is eager to get back into training and to book another fight to capitalize on his sudden notoriety. Campbell had won four straight fights prior to running into Farias and competed for well-known regional promotions such as Cage Titans and Classic Entertainment & Sports MMA.

He has no regrets about taking the short-notice fight in Brazil and hopes to again compete for Taura MMA if he doesn’t return to his familiar New England stomping grounds.

“I feel like I’m in a pinball machine and I was kind of bouncing around and I landed in one of those holes where you get the bonus,” Campbell said. “It feels for a second like I’m stuck, but I’m just gathering so many points right now. I’ve got so many Brazilian fans who are reaching out, they like gritty fighters I think. To see somebody who-You’re watching the video and you’re like, ‘Sh*t, dude’s on his back, oh wait they’re stopping it, why are they stopping it? Holy sh*t his ear is f*cking hanging off, how long did he fight with his ear hanging off?’

“You can be the greatest fighter, a f*cking perfect record, immaculate, and then you run into a brick wall and then they can’t fight through it. My career is defined by never giving up. All of my struggles or most of them, first-world problems probably, have been in the cage. People know that I’m not gonna ever give up so now it’s like can you back it up with good fighting? I think I’ve shown that I can. I think I’ve weeded out all the mistakes and whatever it is that I went through throughout my career that didn’t let me be one of those perfect fighters.”