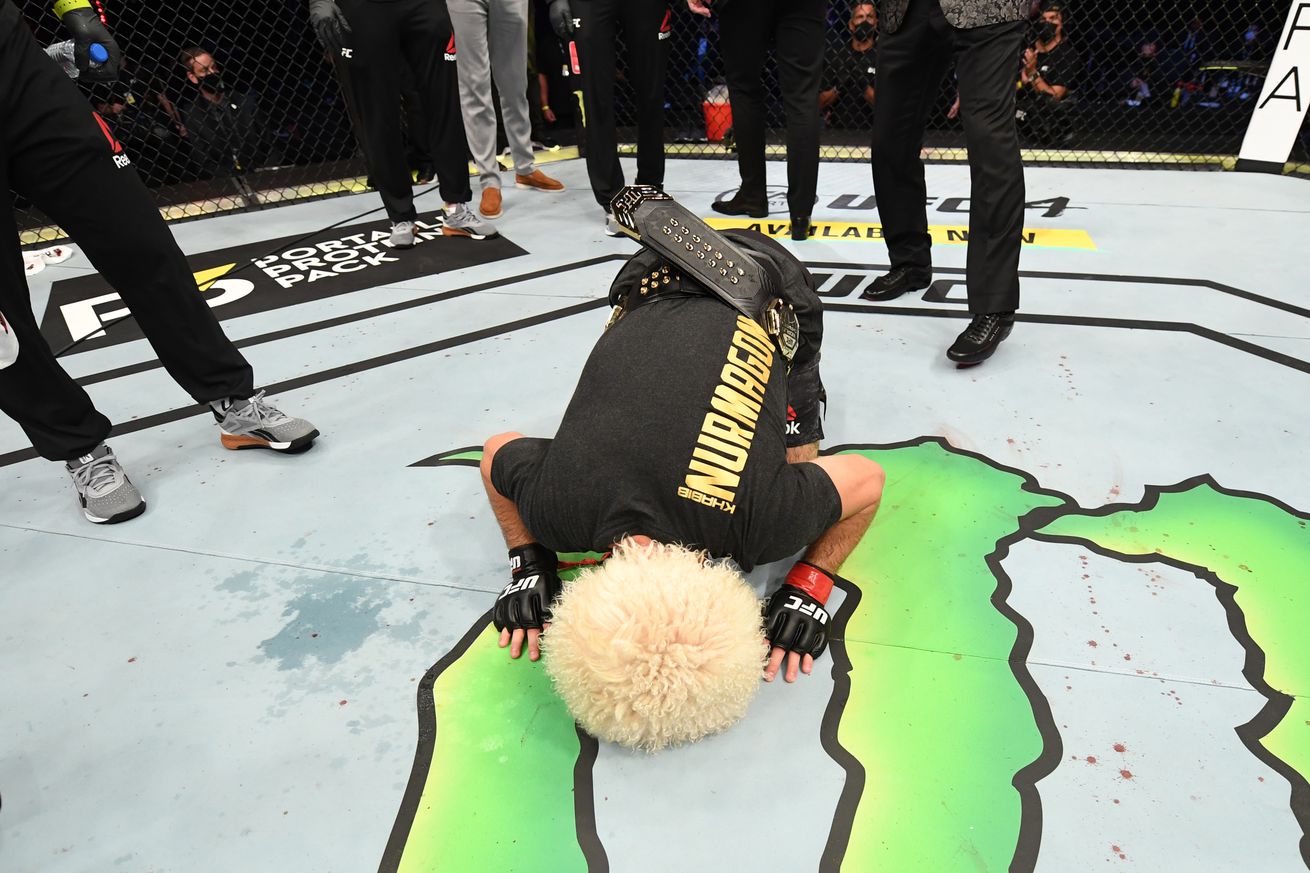 The timing of Khabib Nurmagomedov’s retirement may have been surprising, but given how he’s dictated his entire career, it shouldn’t have been.

His hand raised, victorious in a place that idolizes him, a dangerous opponent vanquished, Nurmagomedov took even stronger hold of a moment that he had already seized and ended things on his terms.

“It was my last fight,” Nurmagomedov stated, shortly after submitting Justin Gaethje in the main event of UFC 254.

He went on to explain how difficult it was to go forward with Saturday’s fight in the wake of the passing of his father Abdulmanap, a monumental figure not just in Nurmagomedov’s life but for the entire Republic of Dagestan. He promised his mother that the next one would be his last and he intends to keep that promise. He also took a swipe at past opponents Dustin Poirier and Conor McGregor, reminding everyone that they’d fallen before him just as all the others did.

Those are a couple of reasons to believe that this retirement will stick. Another is that Nurmagomedov has always been clear with his intentions, and even with everyone knowing what his plan—Father’s Plan—was both inside and outside the cage, not a single soul could stand in its way.

Certainly, there are unanswered questions. That’s how these things go. But he’s done just about everything in his power to guarantee that he’s included in any serious conversation regarding who is the greatest fighter of all-time. Realistically, that’s all anyone can ask for given how comparing different eras is an imprecise science.

Even if you’re not wowed by the 29-0 record (an odd thing not to be wowed by), the quality of his victories stands out. He dominated the very best competition in MMA, including Gaethje, Poirier, McGregor, and Rafael dos Anjos, all of whom held UFC gold themselves at one point in their careers. And when we talk about Nurmagomedov’s domination, we have to look beyond the scorecards. He made the best of the best look average compared to him.

Saturday’s win showed there was still plenty of room for growth for Nurmagomedov, who turned 32 this past September. Rather than immediately go to his wrestling, Nurmagomedov charged at the hard-hitting Gaethje and pressured him non-stop in the standup. In the standup, with Gaethje of all people. So much for the narrative that Nurmagomedov isn’t much of a striker.

He got it done with his grappling in the end, turning Gaethje into a white belt volunteering for a jiu-jitsu demonstration, and if this was the only Nurmagomedov fight you’d learn quickly how he earned his fierce reputation. It was as fine an exclamation point as any for one to close their career on and even if this isn’t truly the end, Nurmagomedov picked a hell of a good time to take a break.

What fresh fights are left that fans are just dying to see? Would-be UFC 254 replacement Michael Chandler? Charles Oliveira? Dan Hooker? Kevin Lee? All respectable names, all of whom would have far more to gain from a fight with Nurmagomedov than Nurmagomedov himself. Even those with a fondness for old-fashioned resume building have to admit that any future fights would be more for fan-fulfillment than Nurmagomedov’s self-fulfillment.

The two biggest missed opportunities are his cursed series of scheduled bouts with Tony Ferguson and a bout with retired legend Georges St-Pierre that both men expressed having a strong interest in. You can blame the mischievous MMA Gods for the first one not coming to fruition, and the tight purse strings of the UFC for the second. Either way, one can make a strong argument that Nurmagomedov has surpassed Ferguson at this point, and a win over a 40-year-old “GSP,” no matter what weight class it took place at, would be more of a luxury item than an essential piece of the Nurmagomedov collection.

Looking back, all the talk of what UFC President Dana White’s super secret special plans were for Nurmagomedov seems silly, given that it was always Nurmagomedov and his team who were going to decide his future. At Saturday’s post-fight presser, White seemed resigned to that fact that this might truly be the last time we see Nurmagomedov compete inside the octagon. For better (Nurmagomedov refusing to fight McGregor a second time regardless of the potential payday) or worse (Nurmagomedov going nuts at UFC 229 after fighting McGregor the first time), Nurmagomedov calls the shots when it comes to when and why he fights.

I’m not ruling out a comeback. This is an extraordinarily emotional and difficult time for billions of people all over the world, including Nurmagomedov. Much like St-Pierre, Nurmagomedov has been singularly focused for so long on one goal—a goal with constantly shifting parameters, mind you—that if he can bring things to a halt for just a moment, he should. There’s no way for any of us to know what Nurmagomedov’s exact mental state was in the lead-up to his final fight. There’s no way for us to know where his head will be at tomorrow. And two years from now? Who’s to say that someone else doesn’t rise up through the ranks to challenge his GOAT status, prompting him to dust off his papakha for one last ride.

Is he the best ever? Does it matter? He wins any hypothetical matchup at 155 pounds, and that includes prime versions of B.J. Penn, Frankie Edgar, Benson Henderson, Eddie Alvarez, Shinya Aoki, and whatever other lightweight great you want to throw in the mix. You can take just about any fight from his career and use that as a snapshot for what a relentless winner he was. The most controversial fight of his career, a striking battle with Gleison Tibau at UFC 148, ended with Nurmagomedov earning 30-27 scores from all three judges. Even at his “worst,” Nurmagomedov won big.

UFC 254 was Nurmagomedov at the peak of his powers. If he was to lay his gloves down, he made sure it was after reminding everyone what it looked like when he got his hands on his opponents. Question what more he could have done if you want, question if this retirement will stick, but one thing you can’t question is the man’s timing. After another flawless performance, nobody can argue that “The Eagle” hasn’t picked the highest possible point from which to soar off into the sunset.