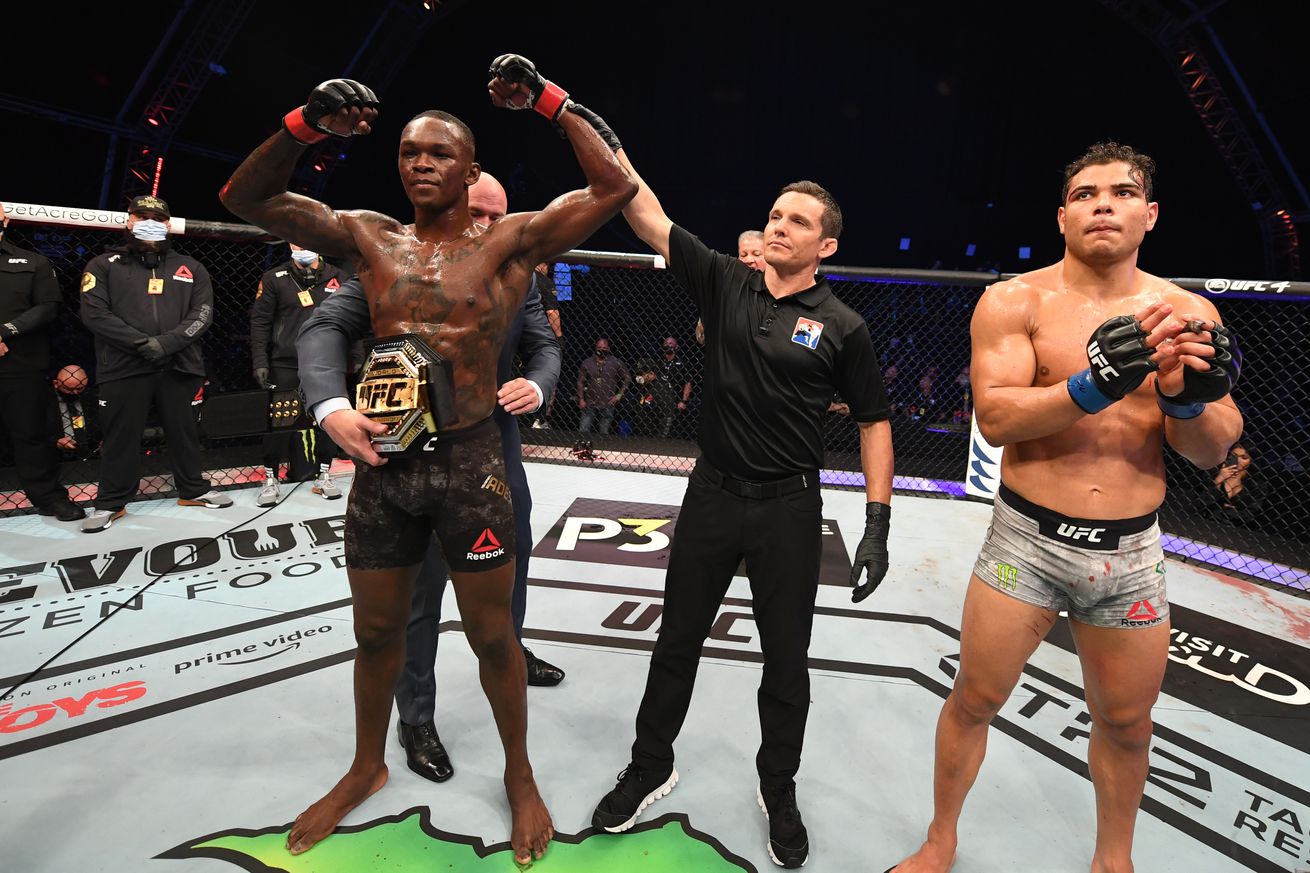 There was a lot on the line at UFC 253 on Saturday night.

For Israel Adesanya it was not only the opportunity to defend the middleweight championship, but he was going against another undefeated fighter in Paulo Costa, who had looked unstoppable through his first few fights inside the octagon.

What was teased as a potential Fight of the Year played out like anything but that after Adesanya picked Costa apart and then finished him in the second round.

Meanwhile in the co-main event, Jan Blachowicz pulled off the upset by knocking out Dominick Reyes to claim the vacant light heavyweight title after former champion Jon Jones vacated the belt.

Blachowicz has been on quite the tear lately but he looked better than ever while dominating Reyes from start to finish while becoming the second Polish champion in UFC history after Joanna Jedrzejczyk.

With that said, there’s a lot to talk about from UFC 253 so let’s look at what passed and what failed during the latest pay-per-view from Fight Island.

Prisoner of the Moment

No one will say Israel Adesanya’s best performance was his win over Yoel Romero back in March, but that lone victory doesn’t even come close to defining his career.

He reminded the world of that very fact by delivering an absolute stunner at UFC 253 as Adesanya dismantled Paulo Costa for the better part of nine minutes en route to a second round TKO.

One of the biggest problems plaguing MMA today in terms of criticism is constantly living in the moment. A single great win makes a fighter look unbeatable while one bad night at the office and suddenly that same person is a bum.

The reality is a fighter should always be judged based on a larger body of work, which is why Adesanya’s less than spectacular showing against Romero was an anomaly rather than the new norm.

On Saturday night, Adesanya was a surgeon as he cut down Costa’s powerful base by first chopping away at his lead leg with a series of kicks that left a nasty bruise on the Brazilian. Once that game plan was established and he had Costa thinking about the next kick coming for his legs, Adesanya began targeting the head with more regularity.

A head kick opened up a cut on Costa’s eye and that was the beginning of the end.

Once he knew Costa was compromised, Adesanya began engaging with him in those bigger exchanges, which eventually set up the punch that ended the fight.

Whatever criticism Adesanya took for his previous fight — and let’s not forget Romero also played a part in a less than stellar show — he shucked off with a masterful showing against Costa, who had been billed as arguably the most terrifying fighter in the middleweight division.

It’s hard to see anybody beating Adesanya as long as he stays at 185 pounds, especially if he keeps dissecting opponents the same way he did Costa at UFC 253.

There was a time not that long ago that Jan Blachowicz was riding a 1-4 record over five fights in the UFC and it appeared the once promising former KSW fighter was never going to develop into a serious threat in the light heavyweight division.

That’s when Blachowicz decided to stop trying to reinvent the wheel with his training and he returned to his old head coach Robert Jocz to correct course on his UFC career.

Nine fights later, Blachowicz put together an 8-1 resume capped off by his second-round knockout over Dominick Reyes to realize his dream of becoming UFC champion.

Blachowicz now joins past champions like Robbie Lawler and Michael Bisping, who were always good but never quite great until it appeared they were being counted out completely. Much like Lawler’s resurgence when he returned to the UFC, or Bisping knocking out Luke Rockhold after taking a title fight on 10 days’ notice, Blachowicz proved that he’s only getting better at 37 years of age.

He dominated Reyes in every facet of their fight before finishing the fight with a knockout that finally saw Blachowicz crowned champion.

In a sport where hype often times outweighs talent when it comes to attention being paid to certain fighters, it’s nice to see a veteran like Blachowicz finally earn an opportunity like this one and then make the most of it. Blachowicz will never be the loudest champion on the UFC roster and chances are he’ll probably never be the biggest draw (unless the UFC allows him to defend his title in a stadium in Poland once audiences can return) but he’s one of the best examples that hard work and perseverance can actually pay off.

When Demetrious Johnson was traded away to ONE Championship, and Henry Cejudo was about to defend his title against then bantamweight champion T.J. Dillashaw, it appeared the flyweight division was on its death bed.

Rumors swirled that the UFC was looking to close down the division and a string of high profile releases only added fuel to the fire that the promotion wanted to burn down its smallest men’s division.

Then Cejudo knocked out Dillashaw in spectacular fashion and interest in flyweight started to grow again. Just recently, Deiveson Figueiredo became champion with a spectacular showing against Joseph Benavidez in a passing of the torch moment that saw the Brazilian look like a wrecking machine in a division better known for decisions than finishes.

Now Figueiredo is primed for a fight against former bantamweight champion Cody Garbrandt in another high-profile title bout at 125 pounds.

At UFC 253, a new flyweight star emerged after Brandon Royval engaged in a round of the year candidate with Kai Kara-France and then pulled off a second-round submission to earn his second straight post fight bonus since joining the UFC roster.

Royval hasn’t had it easy with his first two fights coming against a former title contender in Tim Elliott and then a top 10 opponent like Kara-France but he’s made the most of his opportunities.

The wild exchange that will be replayed in highlight reels for years to come saw Royval knocked loopy by a big punch from Kara-France only to counter seconds later with a jaw-dropping spinning back elbow. Royval is the kind of fighter the flyweight division has always needed and he’s delivering on the biggest stages possible right now.

Will he be a champion or at least a threat to the title one day?

Who knows but one thing is absolutely certain — flyweight is thriving right now and Royval is an outstanding addition to the division.

What Are We Supposed to Use? Harsh Language?

After two back-and-forth rounds, Hakeem Dawodu desperately wanted to force Zubaira Tukhugov to exchange with him, which led to him taunting his opponent with a little bit of foul language.

That’s when referee Kevin Sataki told the fighters to stay quiet and stop using curse words in the cage. After the fight was over, Dawodu actually went as far as apologizing for his potty mouth.

The problem is Dawodu and Tukhugov were involved in a fist fight where they were literally trying to render each other unconscious yet a few bad words exchanged was somehow over the line?

Listen, the dignity of martial arts is absolutely something that should be respected and there’s a time and place for that but two fighters engaged in a battle inside a cage shouldn’t be told to tone down foul language like they were grade schoolers at recess.

This isn’t the first time a referee has told fighters to pipe down in the middle of a contest but telling Dawodu to clean up his language is a head shaking moment at best and a gross overreach by the official at worst. If athletes want to talk, taunt or otherwise shout at each other in the middle of a cage fight, the tone and language used should be the least of concerns for the referee.

After dispatching Paulo Costa in less than two rounds in the UFC 253 main event, Israel Adesanya was less concerned about his own celebration than confronting UFC president Dana White about the fighters who failed to make weight for the event on Friday.

One of those matchups involved Adesanya’s teammate Shane Young, who was blasted with a head kick from Ludovit Klein after he came into the fight four pounds over the featherweight limit. While Dawodu was able to get a split-decision victory in his fight, Tukhugov also came into the night after missing weight by four pounds on Friday.

Adesanya was noticeably angry about the fighters missing weight and he later explained that a 30-percent fine levied against show money wasn’t enough of a deterrent to stop someone from failing to hit the mark on the scale. Instead, Adesanya advised imposing a 90 percent fine to ensure fighters do everything possible in order to make weight.

Now after Real Sports on HBO documented the atrocities of extreme weight cuts in MMA during a recent episode, no one should be advocating for fighters to punish themselves even further while risking serious harm to their bodies. That said, every fighter who signs a contract for a fight does so with the agreement that both athletes will make the agreed upon weight.

The issues surrounding weight cutting in MMA aren’t going to be solved tomorrow, next week or probably any time in the next couple of years. That said, Adesanya is onto something when it comes to the punishments handed down when a fighter fails to make weight.