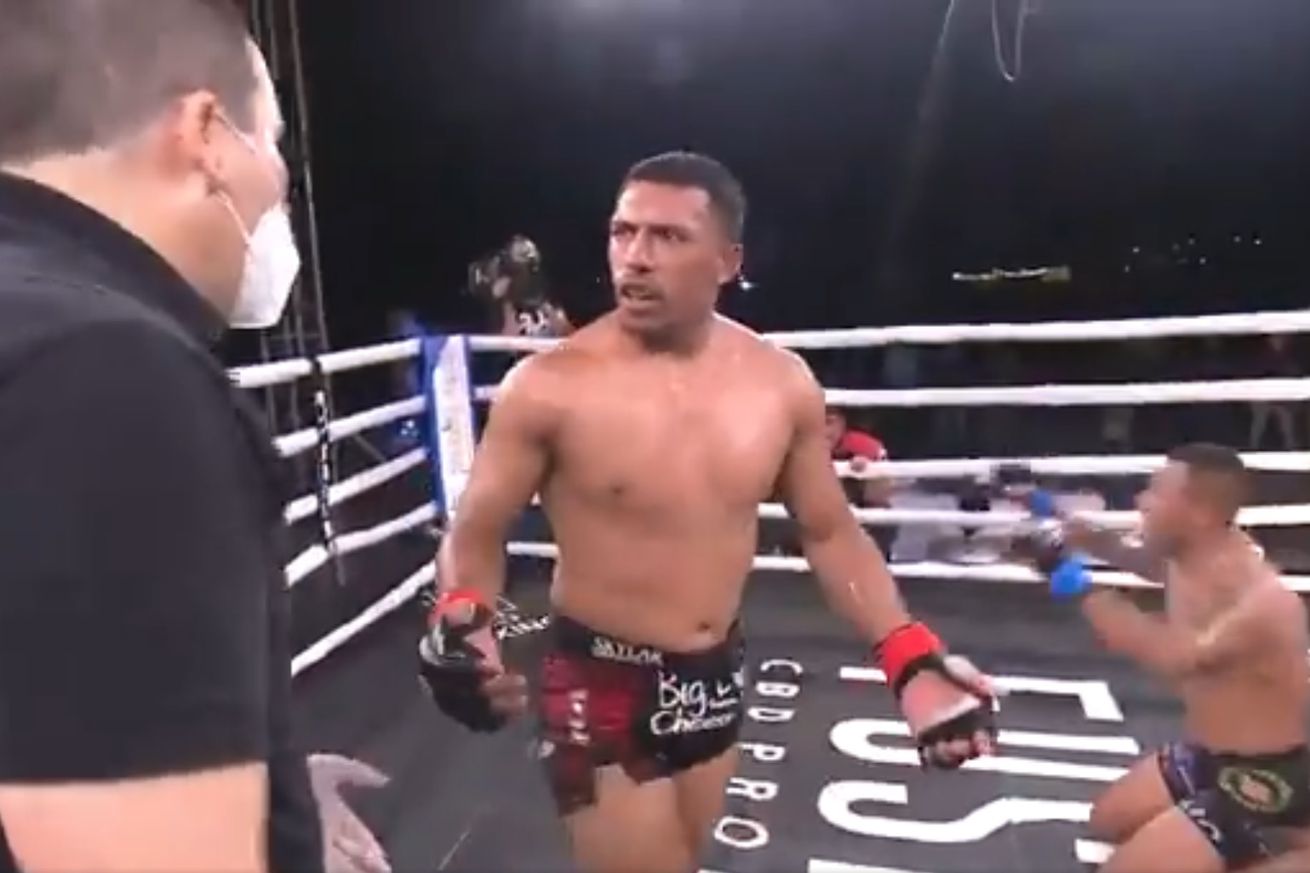 Thursday marked a neat moment in combat sports history as second-generation fighter Bella Mir – the teenage daughter of former UFC heavyweight champion Frank Mir – made a successful pro MMA debut, defeating Danielle Wynn by unanimous decision. That bout occurred at an iKon Fighting Federation show in Sonora, Mexico, and while you can read all about Mir’s performance in this story, you can check out our favorite oddity from the card right here.

The iKon fights took place in a five-roped ring rather than a cage, which led to some awkward moments when grappling exchanges carried the fighters out of bounds. That’s what happened to Daniel Palomares and Anthony Jimenez, forcing referee Servando Licano to reset them in the middle of the ring.

What Licano failed to do was put Jimenez in a position where he could properly defend himself.

Not going to win any friends winning that way but a win’s a win!#iKon2 pic.twitter.com/NcisbTqOba

Yes, Palomares already had his back so it wasn’t a great place for Jimenez to be, but Licano let Palomares slide his hand right under his neck before the action was properly restarted. Bold take: that error directly led to the finish.

Good for Palomares for earning the first finish of his career, I guess? Gotta take ‘em if you can get ‘em.

Josh Fremd puts a quick halt to this one!#LFA93 pic.twitter.com/AF9Z7KP6Mu

Would definitely have preferred to see Fremd walk that one off, but at the same time until the referee steps in there you’re free to fire. If Jed Meshew were around, he’d say something like, “Well that wasn’t very Fremd-ly of him!” But he’s not, so we won’t.

Hernandez went on to take a unanimous decision. I’m not saying he won over the judges because of this one strike, but I’m not not saying that. He definitely won over the hearts of America, that’s for sure.

MMA can be truly poetic sometimes. When last we saw Sam Hughes in Missed Fists, she was on the receiving end of a wicked inverted triangle that left her unconscious and probably having nightmares about missing out on her chance to become the inaugural LFA strawweight champion.

That was three months ago. This time, it’s Hughes who left someone lying, slapping a buzzer-beating guillotine choke on Danielle Hindley.

That’s one way to make a statement for a rematch and you can bet that Hughes is probably one fight away from getting a chance to rematch Vanessa Demopoulos, who defends her title against Lupita Godinez next Friday.

Before we proceed further, we’d like to pause for an important safety announcement: Never, ever cross your legs when you have your hooks in!

Don’t see that every day.

Kirill Kornilov finishes Anton Vinnikov via ankle lock counter with his back taken. Gotta be careful crossing those feet. Vinnikov was too injured to continue and still down for the official announcement. #GFC29 pic.twitter.com/fcPmXtsEFH

Anton Vinnikov is going to be walking funny for a while after that mistake.

Thank you to Vinnikov, Kirill Kornilov, and the fine folks at Gorilla Fighting Championship for this demonstration. You can catch a full replay of GFC 29 free on YouTube.

Here’s Juan Roman kicking the living everything out of Mike Shipp at Caged Aggression 28 (available for pay-per-view replay here) at in Eldridge, Iowa, last Friday.

Let’s go to Jeffery Wilson on the call to break this one down:

This next clip from World Warriors Fighting Championships 17 in Lviv, Ukraine, features so much of what we love about international MMA: A guy with a 3-11 record beating a guy with a 0-0 record, the losing fighter being temporarily transformed into a Wavy Tube Man, and, most importantly, a knockout that takes just 10 seconds to unfold.

Congrats to Alexander Mikhaylin for picking up that elusive fourth win and to Mikhaylo Samchik, better luck next time, good sir.

You can check out a full replay of WWFC 17 on YouTube.

Brazil’s Future MMA promotion has become a reliable provider of not just legitimate prospects, but cool highlights, and last Friday’s show in Sao Paulo (available for free replay on YouTube) was no different.

Rodrigo “The Dynamis” Lidio blistered Adilson “Jack Godzilla” Fernandes with a flying knee to end Fernandes’ lightweight title run before it even had a chance to begin.

Earlier in the card, two other lightweights made their pro debut and it was Lucas Souza who got the better of Andre Leandro with a sweet arm-triangle from bottom.

Giving Lidio’s knee a run for its money for the Most Vicious Shot of the Week award is Muay Thai fighter Singdam Diamond 98. Singdam popped Timothy Khamal with a jumping switch kick and if you slow it down you can see that his shin caught nothing but chin.

This switch kick to the face by Singdam Diamond 98. Should have just stayed down, man. #SuperChamp pic.twitter.com/OCk0xB63Wz

Somehow, despite all that, we have a KO from Watch Out Combat Show 55 (free replay available on YouTube) in Rio de Janeiro that may top them all.

Jansey Silva loaded up the kick. Gustavo Prado zigged his head when he should have zagged.

Jansey Silva connected about as flush as possible with this kick. Gustavo Prado was stretchered out of the cage. #WOCS55 pic.twitter.com/1TSJGHvsMf

Before we leave off, we have to give a long overdue shout-out to Karate Combat, which is currently airing its second season with free shows on their YouTube channel. Their first run of events showcased some innovative ideas with a fighting pit, slickly produced videos that showed off their competitors’ personalities, and a mixture of martial arts rulesets meant to bring the ancient art of karate into the modern world.

Season 2 cranks all of that up to 11, making the most of the pandemic era by filming in a studio and using green screen and computer graphics to create elaborate fantasy settings for their events. For example, this past Sunday’s “Scrap Punk” episode apparently took place in an apocalyptic wasteland where karate is king.

Event 4 will take #karatecombat into a Scrap Punk world. Check out some action from the upcoming event – you surely don’t want to miss this one Sunday 7 PM ET on YouTube! https://t.co/jkEzHyFP0y #karate #martialarts #enterthepit #fullcontactentertainment pic.twitter.com/oy8IzMFBvZ

Look, it’s weird. But give it a shot. Though I’ll be honest, last time I checked…

That is not how one karates.

Thanks again for joining us and don’t forget, we are less than a month away from this:

Oh hey! Didn’t se you there!

Up and Coming on Camsoda!
(see what we did there?)

I feel like this is the road that leads us to Karate Combat’s grim future.

If you know of a recent fight or event that you think may have been overlooked, or a promotion that could use some attention, please let us know on Twitter – @JedKMeshew and @AlexanderKLee – using the hashtag #MissedFists.