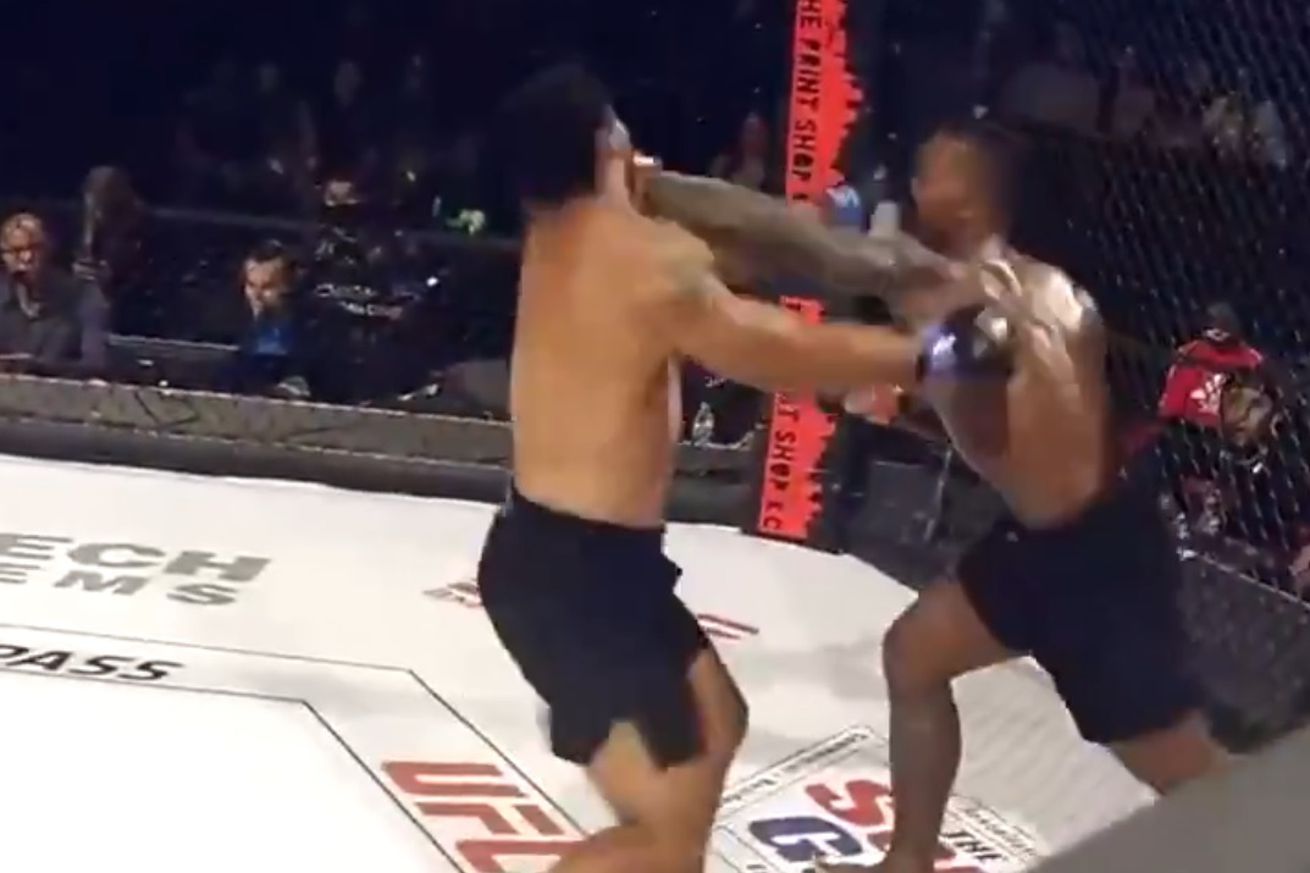 We spend so much time in this business looking for the next big thing (*cough* Khamzat *cough*) that we too often callously toss aside talented fighters once they reach a certain age or hit a slump in their careers. It doesn’t help that once you start to go downhill in MMA, the slope only seems to get steeper and steeper with every fight.

This week, we’re happy to say that two respected veterans got back in the win column in a big way.

(Before we proceed, we want to give the usual shout-out to @Grabaka_Hitman, arguably the greatest chronicler of MMA alive today. He’s started a Patreon page, which I think is a cool way of showing our appreciation for him even if you can only spare $1 a month. Do it for the love of the game.)

AL: Few welterweights have flirted with greatness quite like Jason High. Early in his career, he made a surprising run to a DREAM tournament final before eating a head kick from Marius Zaromskis. Still, he showed enough promise to be signed by the UFC before he inexplicably went one-and-done before being sent back to the regionals. He ended up in Strikeforce, then back in the UFC where he went 2-2 before being released again after shoving referee Kevin Mulhall following a controversial TKO loss to Rafael dos Anjos.

High then failed to find his footing with the World Series of Fighting (later the Professional Fighters League), which included another early stoppage controversy as he lost by submission to Efrain Escudero in a fight where he clearly didn’t tap out. It’s been a rough six years for High, is what I’m getting at.

JM: One could say that Jason’s career never quite had the Highs we might’ve expected…

AL: Pack it up, everybody. Show’s over. Move along now.

Punnery aside, High has always been a big league talent and that was evident at Fighting Alliance Championship 4 (available on UFC Fight Pass) last Friday when he was paired up with the considerably less experienced Josh Weston.

Credit to Weston, he made it to the second round before being blasted to smithereens.

JM: That really is the perfect clip of a veteran fighter beating an over-matched opponent. At 38, High is no spring chicken and he didn’t blow Weston out with athleticism, just a well-timed pull-counter. Veteran savvy.

AL: High also earned the FAC welterweight title with this victory. While I’m sure this win doesn’t rank among his greatest achievements in MMA, damn it must have felt good for him to have his hand raised for the first time since June 2017.

Amateurs were in action as well at FAC 4, including heavyweight Bogdan Avgustinovich who used his ham hands to put down Mitch Adams.

Successful amateur debut for Bogdan Avgustinovich with the first round uppercut. And yes he has a combat sambo background. #FAC4 pic.twitter.com/GwrmPx2yny

This dude doesn’t look like he’s going to be amateur for long.

JM: There really is only one inevitable outcome when someone just covers up against the fence and it’s that right there. Adams was a sitting duck and apparently Avgustinovich was fishing with dynamite.

Also, I could know absolutely nothing about these men or fighting, and have told you that the guy with the name that sounds like he’s from ancient Sparta was going to kick the crap out of the guy who sounds like he works at H&R Block.

AL: Amateur welterweight Mikey England also picked up a nice win, but I’m really impressed by the toughness of his opponent Shaun Scott.

He’s had to go through life dealing with hardship from birth. When he’s waiting for a table, will they call out Shaun or Scott? When someone calls out in a crowd, he’s twice as likely to have to turn around. The man is one generic middle name away from being halfway to a famous assassin. He’s lived with all that extra tension for over two decades. A little thing like getting punched in the face isn’t going to phase him too much.

AL: If High’s win was enjoyable, then Mamed Khalidov’s return to form at KSW 55 (available on DAZN) last Saturday was downright inspirational.

ICYMI: Mamed Khalidov landed one of the best knockouts ever seen in KSW tonight! #KSW55 pic.twitter.com/1bKnY9KXZm

JM: I love KOs like this because it’s clear that this was nothing but a prayer from Khalidov. Askham is backing up and Khalidov’s primary attack has failed, but since Askham is in full retreat he just tries to land anything he can and lo and behold that flailing toe iced Askham.

It’s like at the end of a basketball quarter when you just heave something to the hoop from the other end of the court and it magically goes in.

AL: Khalidov turned 40 this past summer and would have found himself on a four-fight skid if he lost a second straight time to Askham. Instead, he put on a vintage performance and is once again the KSW middleweight champion.

I’m sorry to say there’s more lopsided action on the way, this time from MMA SERIES-17: Blacksmith Fighting Championship 2, which sadly is not a fighting league exclusively for blacksmiths.

It is, however, a promotion that’s given some talented fighters the opportunity to style in the cage.

What an MMA debut for Glory/Kunlun/WLF kickboxer Anatoly Moiseev. Absolutely chops down Anthony Serre before landing a head kick in R1. #MMASeries17 pic.twitter.com/mH7VQa0Ajm

JM: I am not a brilliant man but it seems to me that if I were to be forced into a situation where I’m facing a GLORY kickboxer in MMA the first thing I would do is sh*t my pants. Then, once that was taken care of, I’d proceed to do everything in my power not to stand up with him, for exactly the reasons we saw here.

This is MMA, Serre. Heroes get medals, but cowards get to keep their teeth.

AL: Speaking of knockouts that would have stood head and shoulders above the rest any other week, Ilya Freymanov’s spinning elbow knockout of Erziman Bayramov was criminally overlooked.

JM: That KO is probably better than Khalidov’s, honestly. I love spinning sh*t.

AL: Lastly, we have to give props to 24-year-old Viktor Kolesnik for putting on his latest exciting performance.

Viktor Kolesnik dishes out a beating in the MMA Series main event, ripping Kurban Chokuev to the body before finishing with an elbow to the side of the head and GNP. #MMASERIES17 pic.twitter.com/uCSDvroX12

JM: Now this kid is a prospect. 18-5-1 at only 24 and with two of those losses coming in thrillers against Nate Landwehr, who is now in the UFC. There’s a lot to like about Kolesnik.

AL: Kurban Chokuev was 5-3 heading into this one, so it probably shouldn’t have been booked, but Kolesnik took care of business and should be getting a deal with a major promotion by next year at the latest. Someone sign this man!

Staying in Russia, we travel a mere 1,700 miles from Anapa to Ekaterinburg for RCC Intro 9, which also took place last Saturday.

Welterweight Ilyas Khamzin landed a clean right that absolutely froze Dmitriy Gavrilov… and maybe the referee too considering how long it took him to get in there.

JM: Fun fact, if you traveled 1,700 miles the other way (roughly, stick with me here) we’re talking about being in Berlin. Russia is freaking huge.

Anyway, that KO was funny looking but in no way should it have been necessary to throw another punch at a man literally in a frozen squat. Do better, referee.

As bad as that KO was, our Humpty Dumpty of the Week goes to Aldin Bates who was felled in most awkward fashion by the musically-named Jack Della Maddalena.

The Eternal MMA welterweight champion closed out last Saturday’s show (available on UFC Fight Pass) in Perth, Australia, with a blazing combination that caused Bates’ lead leg to turn to rubber before he collapsed to the canvas.

JM: The full 180 KO rotation with a twist. That’s a rare accomplishment in MMA. I award 9.75 points for that particular finish.

AL: With another successful title defense under his belt and a highlight-reel KO in his most recent appearance, you can bet that Maddalena is on the UFC’s radar.

We close out with a couple of memorable finishes from last Friday’s ONE Championship show in Singapore, courtesy of flyweight stalwart Reese McLaren and up-and-coming bantamweight Eko Roni Saputra.

That’s a life-changing knee. Your ribs are gone, bud.

JM: You can tell that one sucked because of just how violently Toivonen dropped down. The man looks like he got gut shot.

AL: He may have also screamed. Or maybe that was me.

When it comes to Saputra’s first-round submission of Murugan Silvarajoo, we do have to defer to Professor Meshew to break things down:

How to watch ONE: REIGN OF DYNASTIES on 9 October https://t.co/5DM80jx6uq pic.twitter.com/FLMXrjqVsU

JM: That’s so awesome. It’s a keylock, but instead of the normal figure-four wrist lock, Saputra starts it just with one hand and then gets it down to where his hip can start helping before finally locking it in with his leg and using his body weight to drive down. That’s some real grown man strength to basically win an arm-wrestling contest to set that up. Bravo!

If you know of a recent fight or event that you think may have been overlooked, or a promotion that could use some attention, please let us know on Twitter – @JedKMeshew and @AlexanderKLee – using the hashtag #MissedFists.