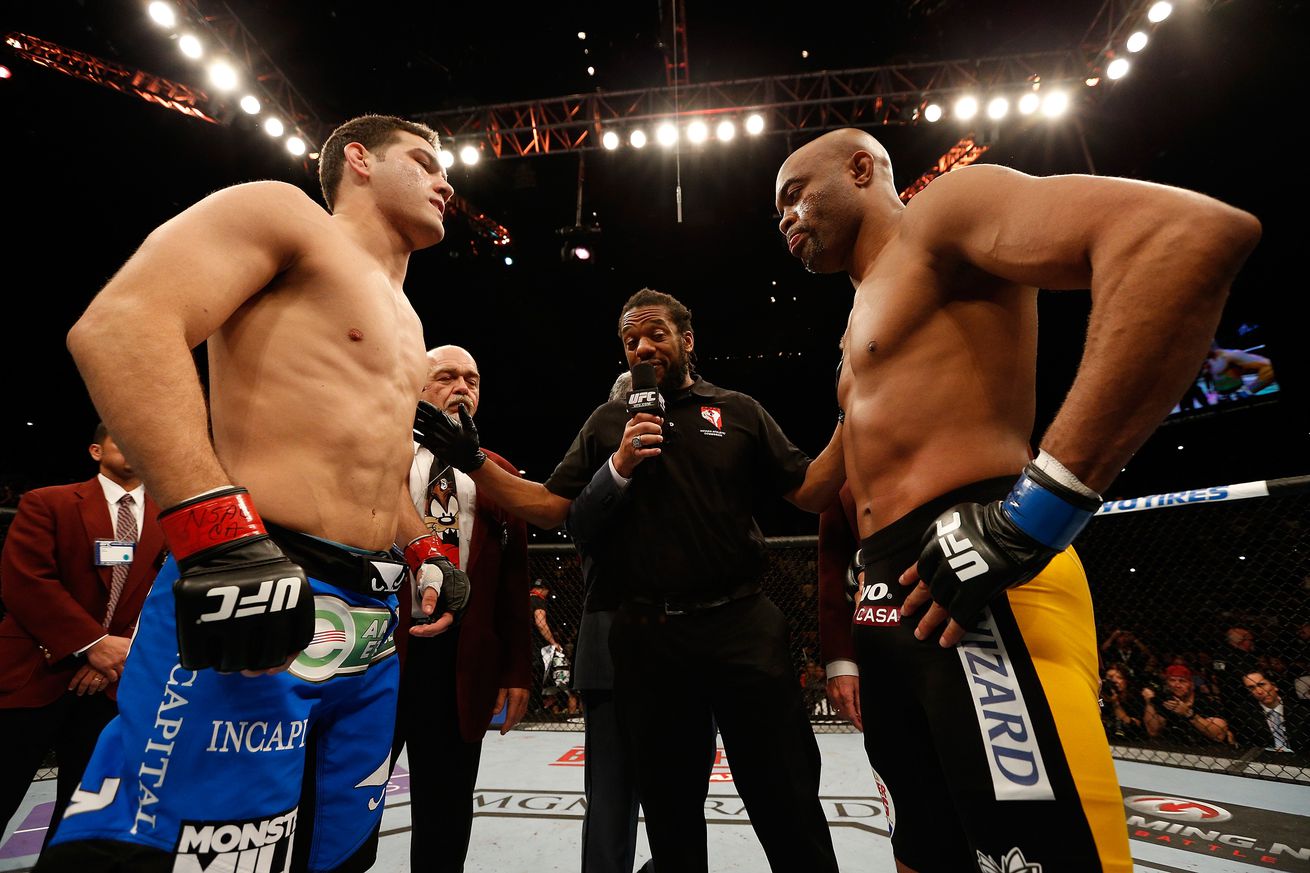 This Saturday, Anderson Silva will compete for what could be the final time in his illustrious career. Silva takes on Uriah Hall in the main event of UFC Vegas 12 and afterwards, it’s thought that the 45-year-old Silva will step away from the UFC, and possibly the sport in general. Ahead of what could be the end of one of the most significant careers in MMA history, there has been an outpouring of remembrances from fellow fighters and now Silva’s greatest foe has joined in.

Chris Weidman was the man who finally ended Silva’s record-setting run in the UFC, knocking out “The Spider” to claim the middleweight title at UFC 162. It remains one of the most stunning wins in MMA history, and when the two men rematched five months later at UFC 168, Weidman again got his hand raised, shattering Silva’s shin by checking a kick. Speaking with Submission Radio recently, Weidman addressed his history with Silva, ahead of the great’s impending retirement, and noted the complicated relationship he had with Anderson.

“One of the good moments, I remember him, we did this huge signing after the first fight going into the second one in New York City,” Weidman said. “The lines were wrapped about the building multiple times, it was just crazy. And I had my son CJ, who is here, and he was with me, and he might have been, well, I guess, one. Yeah, because this is 2013. And Anderson Silva came over to my table, we were talking, I think my dad might have been there, my wife and my son and he. I’m pretty sure he took a picture with him.”

“Some of the negative memories other than fighting, but some of the backstage stuff is one that Longo can’t stand him for. Matt (Serra) and they all witnessed it, but before my first fight with him in the backstage heading out to the weigh-ins, I was getting ready to walk out, and Longo, he was sitting down somewhere. He was supposed to be standing next to me, because you and one cornermen are supposed to be getting ready to walk out for the weigh-ins. And Longo was sitting down somewhere, so I was by myself on the line. And apparently he (Anderson) came behind me and started mocking me and dancing behind me with his full crew. He had like 15 guys, 15 Brazilians, and I was by myself, and I didn’t really realize, but apparently Matt and Ray and them all noticed and they were like, ‘Yo, F this guy, yeah, tomorrow you’re gonna put him in his place’. So, I just thought that was a piece of dirt move and bully maneuver to be doing that behind me. But whatever, I fought him twice.”

Weidman’s wins over Silva irrevocably altered the all-time great’s career. Since losing the belt, Silva’s career has taken a noticeable decline. He has failed multiple drug tests for banned substances and gone 1-5 with 1 no-contest in the seven years since then. And unfortunately, Weidman believes that things will continue to slide for Silva this weekend.

“He’s had an amazing career, and I mean, he hasn’t been looking bad in his last few fights,” Wediman said about Silva’s chances against Uriah Hall. “He had a close fight with Israel Adesanya. If I had to put all my money on who wins this fight, I think Uriah Hall has more interest in winning than Anderson Silva. I think Anderson Silva wants to put on a show and do something awesome and put on a good fight, and I think Uriah Hall has interest in that as well, but I think he would love to get a win over Anderson Silva.”

Oddsmakers agree, installing Hall as a clear favorite in the bout. But that’s why they fight the fights, and this Saturday, Anderson Silva will have one more chance to turn back the clock and put on a vintage “Spider” performance.

All hail the king. Brazilian MMA fighters speak on the legacy of Anderson Silva.

Hope. Dana White reveals new talks with Khabib Nurmagomedov: ‘I have a feeling he might go for 30-0’.

Fights Gone By. Previewing the “final” fight of Anderson Silva’s career and where he goes next.

I don’t think I’m owed anything & never said I was. Nor did I demand anything from UFC. I just laid out why I should be ranked higher, and why it’s ridiculous to give Maia a title shot. Btw I don’t pick my opponents & never have. I’ve fought everyone the UFC has ever offered me. https://t.co/dZttcY7k3o

Also, while we are here. Everyone I’ve ever fought in the UFC had a winning record, at the time we fought. Unless they were 0-0 in the UFC because of TUF (Honchak, Eubanks), or Roxanne, who was 3-3. Not one has had a losing record before fighting me. Not at bantamweight either. https://t.co/qnzVWPRpVs

Bat soup was a bad choice

So @Ruthless_RL pulled out due to an injury. Looking for a replacement I asked for @KChimaev and we can do it at middleweight @ufc @FirstRoundMgmt

I have heard that Israel Adesanya wants to face me next. No problem, If you are ready to fight in March, let’s do this. Prepare for a some fireworks guys #LegendaryPolishPower

Seems like Zabit-Yair is getting remade for a third time.

They did not do well.

Is Team @ufc ready to put up a fight with Team @WBCBoxing on #CelebrityFamilyFeud? Find out tonight at 8|7c! pic.twitter.com/zIqKq7vEpf

Sorry about the lack of TMR yesterday. Atlanta got hit by a storm and I lost power for roughly 12 hours.