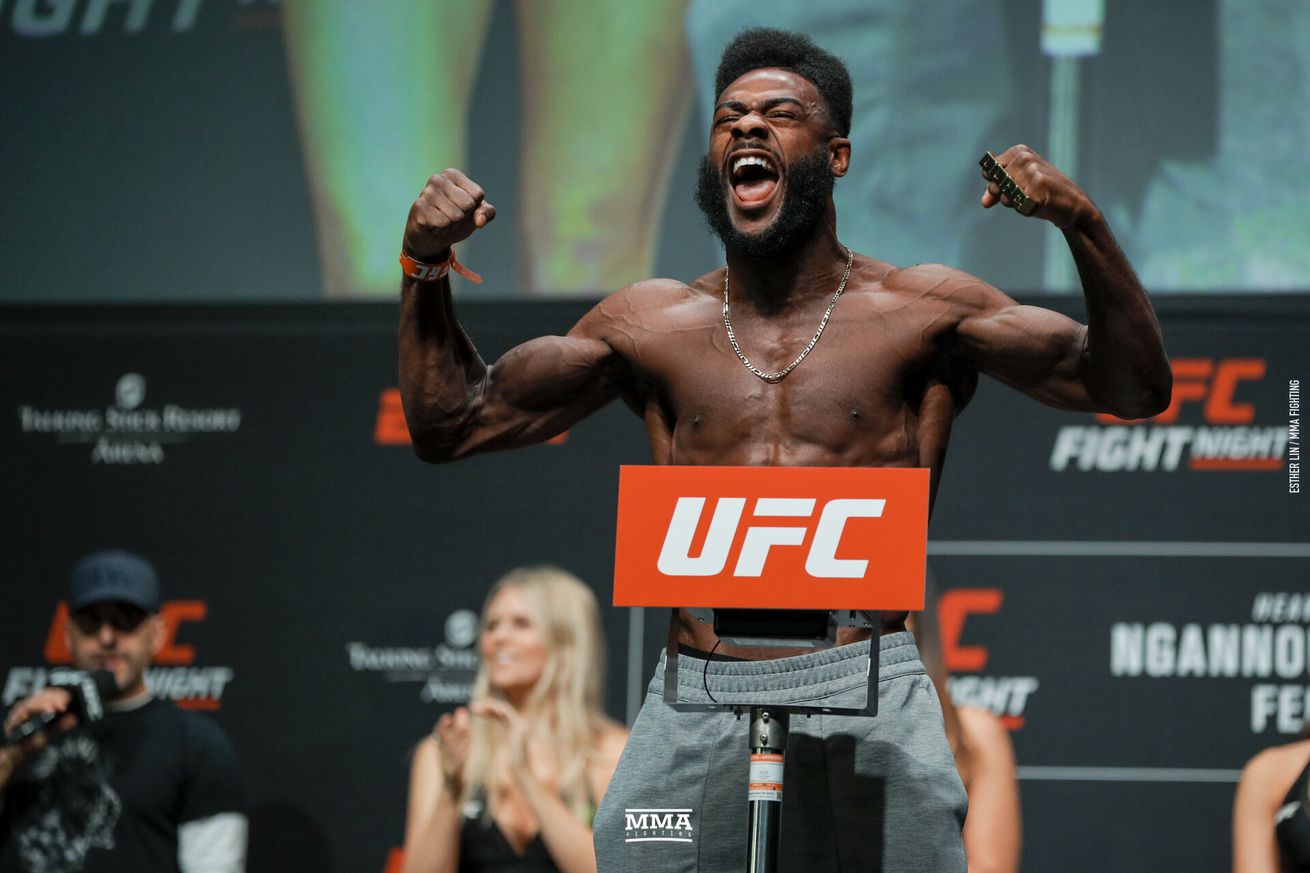 This past week, Cory Sandhagen turned in the best performance of his young career, dominating former bantamweight title challenger Marlon Moraes en route to a second-round TKO victory at UFC Fight Island 5. In the aftermath, Sandhagen was obviously thrilled to return to the win column, but there was one man arguably even more excited than he, top-ranked bantamweight contender Aljamain Sterling.

In June, Sterling demolished Sandhagen, submitting him in only 88 seconds. After such a dominant performance, it was assumed that Sterling would receive the next bantamweight title shot, but the UFC has been dragging its feet on officially announcing a bout. But with Marlon Moraes having just lost to the man Sterling just obliterated, “The Funkmaster” believes there is no way he can be denied now.

“Obviously I’m in a great mood because things could not have gone better in terms of locking up what should be, now, an obvious decision – which, it was obvious a year ago – but an obvious decision for the next title challenger at the bantamweight division,” Sterling said on his podcast this week. “So I’m super pumped about that.

“This was the next guy who could have potentially blocked me . . . The higher powers definitely had a plan and I think that was the icing on the cake to solidify that there is no more dodging, dancing around the fact that I should be the No. 1 guy and I am the No. 1 guy.”

Following UFC Fight Island 5, Sterling is now officially the top-ranked contender at 135 pounds. Prior to this weekend, he had been stuck at No. 2, behind Moraes, who knocked him out in 2017. Since that loss though, Aljamain has posted a *ahem* sterling record, going 5-0, with wins over ranked opponents Cody Stamann, Jimmie Rivera, Pedro Munhoz, and Sandhagen. It’s an impressive run that Sterling feels should have earned him a title shot long before now, however, the tumultuous reign of Henry Cejudo complicated matters, as Sterling outlined.

“I think I was the No. 1 guy last year when Pedro Munhoz knocked out Cody Garbrandt and then I beat Pedro Munhoz,” Sterling said. “That should have put me back in the No. 1 spot. It didn’t. Then I fight Cory Sandhagen, I get the win there. I was told this was a No. 1 contender fight, it didn’t happen. Then enter Dominick Cruz, he gets thrown in there. ‘Oh, Dominick Cruz, how could you not give it to him, he’s a legend? Blah, blah, blah. Henry Cejudo wants to fight him. He wants to fight the toughest guys.’ Really? You want to fight the toughest guy who is coming off a loss and being on the couch for four years? . . .

“Okay, whatever. He got his shot, he’s a legend, I get it. If it wasn’t for Dominick Cruz, I potentially would’t be in the spot that I am now, so thank you for that. But next up after him, you have Jose Aldo. . . He has to fight Marlon Moraes. Close fight, split decision, but he loses. Dana White treats it as a win for Jose Aldo, he gets a title shot, and he fights Petr Yan after Henry Cejudo retires. Vacant title, I thought I was definitely a shoo-in for that. No, Petr Yan is the shoo-in. Okay, Dana, alright. I see what you’re doing. You give Petr Yan a title shot for beating Urijah Faber. Who did he beat before that?

“After that, Aldo loses the fight, Petr Yan is the champion, I’ve got to be next. ‘Oh wait, we’re not gonna announce it yet. We’re waiting on this. Frankie Edgar is fighting Pedro Munhoz.’ Another roadblock! Do you see all the hoops I had to jump through, all the emotional stress that I was dealing with. It was just a roller coaster. . .

“It’s been a wild past few month. Just to think, June was just a couple months back and you’d have thought after a performance like that, even the post-fight speech setting up the stage for myself and Petr Yan, I don’t know what it is. I don’t know if I pissed in Dana White’s Cheerios or something, took his Wheaties, I don’t know if a girl that liked him might think I’m cute. I don’t know what I did to the man but it’s pretty fascinating and bizarre all at the same time that I had to do all of this to get a title shot. And I only did one thing: I just won. Everything else was out of my control.”

Sterling certainly did appear to be getting short shrift from the UFC this year. Despite champion Petr Yan saying he felt Sterling deserved the first shot at his belt, UFC President Dana White still would not directly confirm Sterling as the number one contender. In August, White said that it would “more than likely” be Sterling next however in recent weeks, rumors began circulating that had Moraes won last weekend, he may get the next shot. Rumors which Sterling seems to agree with.

“Now the stars finally align, once again, with Cory Sandhagen taking out Marlon Moraes,” Sterling said. “If Marlon were to win, I’m pretty sure the UFC would have said, ‘Well, Marlon deserves another crack because Henry Cejudo retired, he’s a striker, he’s knocked guys out, this would be a great champion to have for the Brazilian market. Blah, blah, blah. He beat Sterling three years ago.’ Three years ago! I am a much different fighter and it was a short notice fight and I studied no tape on him and yeah, shame on me for that, yeah, he got the win, but to act like the guy sat there said, ‘I know he’s about to shoot, I’m gonna hit him with this knee and time it perfectly and I’m gonna look like a genius.’ That’s not what happened.”

Whatever did happen then, it doesn’t seem to matter now. Even Cory Sandhagen admits that “he’d feel really bad” if they passed Sterling over again, and at this point, all signs seem to point to Sterling finally getting his title shot, which has “The Funkmaster” extremely excited.

Sure. Khabib Nurmagomedov says he wouldn’t coach TUF against Conor McGregor ‘even if they gave me $5 billion’.

Charity. Artem Lobov: Zubaira Tukhugov ‘should be cut from the UFC,’ ready to fight him and donate all money to charity.

Nothing But Love For @impak5 He is not only a great fighter but a better man never showed any type of disrespect and never allowed himself to step out of his character. We’re both strong believers in God and I know that it was in Gods Plan. So I give all credit to God for the victory just like I gave him all the credit in my loss. It was a lesson he was teaching me inorder to prepare me for the moment I am in now. God has something Great in store for @impak5 #GodIsGreat #GodWillNeverFailYou #OnlyPropelYou

Ready for the smoke.

Some real Michael Jordan “and I took that personally” from the champ.

“oMg cOsTA iS iN HiS hEaD!”
The experts never cease to amaze me.
Especially when they’ve never been tested.
‍♂️ ✨ pic.twitter.com/5sPnS9a7N1

Weidman trying to speak it into existence.

There’s always a battle in front of me. I will find a way to get through it.

The champ is watching.

Dr. @BorrachinhaMMA said he’s out until feb, I need to see a diagnosis ? You’re on your Instagram doing everything but backflips . Just sign the contract I’ll wait for January !

Yup.. It takes away all the distractions of going home (2hours from training). Let’s me focus 100% on training and recovery. Before I got the van I used to sleep at the gym on a pullout couch. That’s why I laugh when people tell me they sacrifice everything for this sport. https://t.co/TjRt6pD04C