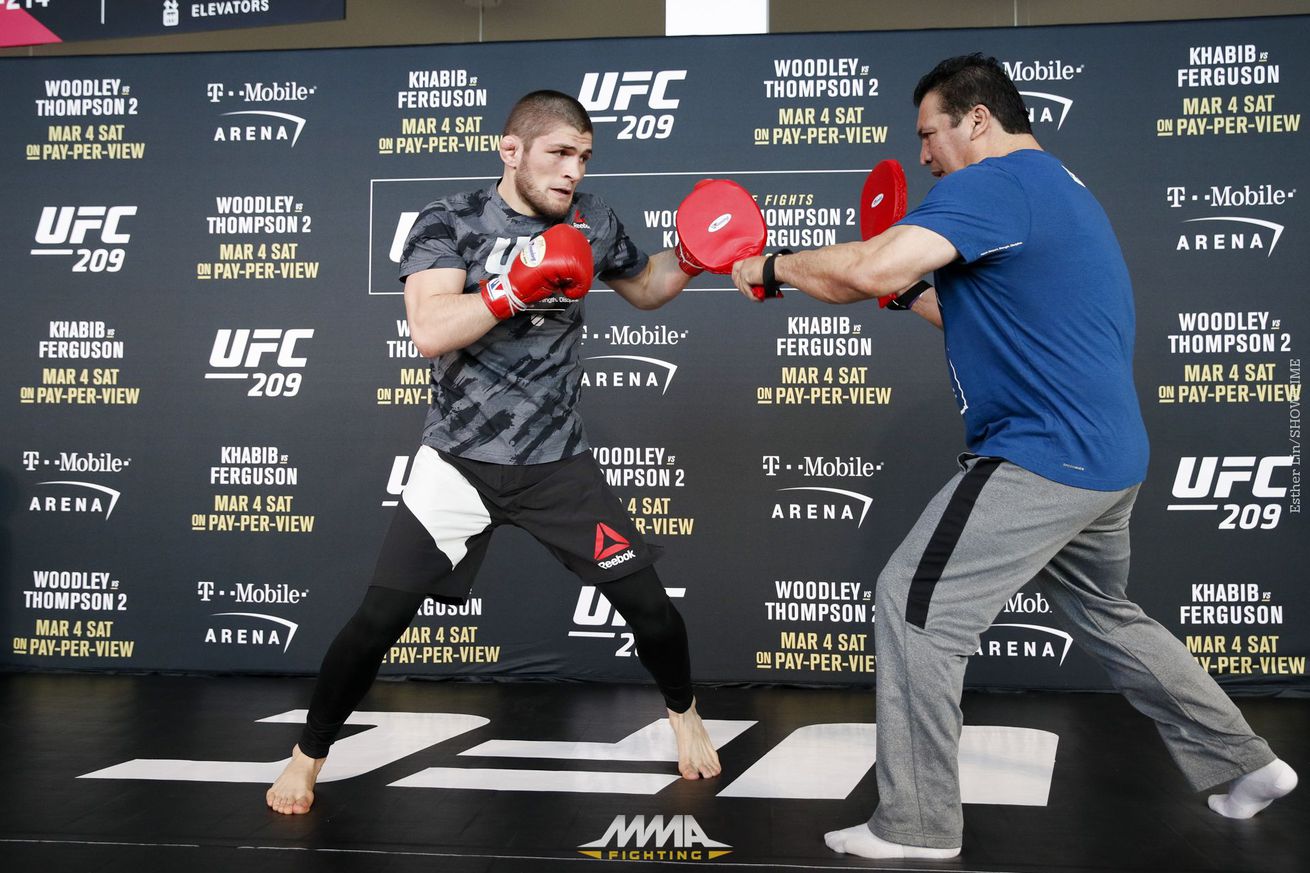 In July, Abdulmanap Nurmagomedov, father of UFC lightweight champion Khabib Nurmagomedov, died due to complications from COVID-19. It was a tragic loss for the MMA community and, in the months since, has left the MMA world wondering how Abdulmanap’s passing may affect the lightweight champion. Well, next weekend the world will find out as Khabib defends his title against interim champion Justin Gaethje at UFC 254. But heading into the fight, Khabib’s head coach Javier Mendez says that though Abdulmanap is no longer in the corner of his son, his presence remains a strong part of their training camp and preparation.

“How Khabib approaches this, I can tell you right now he’s mentally super, super strong,” Mendez told Submission Radio. “We’ve never discussed nothing of his father and missing him. We don’t talk we just go right into what needs to be done. We have not talked about it in this camp at all. We focus on what needs to be done. I (only) say one thing: ‘Father’s Plan.’ Because his father is the one who made him who he is. I basically got lucky enough to have him with me and then utilize what he has and it was father’s teaching that makes him great. So I always use Father’s Plan as a reference to when I want him to fight right. Sure, I made him better at his striking and I’m making him better continuously, but he’s not a champion on striking, he’s a champion on Father’s Plan.”

Nurmagomedov has risen to become one of the most dominant fighters in the history of MMA largely on the back of his exemplary grappling skills, which come from his father’s training. Abdulmanap’s plan for his son was not only fight tactics though, he also had a clear career path planned for Khabib which would have his son retire as champion once he made it to 30-0. Should Khabib retain his title next weekend, his record will be 29-0 and there has been much speculation about whether Khabib would choose to walk away after one more fight. Mendez for his part says that decision is up to Khabib and he’ll support the champion whatever he would like to do.

“Well, he won’t get that from me,” Mendez said. “If we manage to get to 30, he’s not gonna get me to say, ‘Hey, I think you should continue.’ I won’t say nothing. I’m there for him. I’m gonna say, ‘ Hey, I’m here for you, whatever you want. If you want to retire, I’m there. It’s up to you. I’m not gonna say I think you should fight.’ If he asks me, I’ll tell him but if he doesn’t ask me I’m just gonna go with whatever his wishes are.”

Khabib’s wishes remain mostly a mystery to the public at large. The champion has been open about wanting a superfight against Georges St-Pierre and UFC President Dana White seems to be coming around to the idea but that is far from a certainty, especially given what Khabib is up against next weekend. Gaethje is a Division-I All-American wrestler and an opponent many view to be the most dangerous test for Khabib; Mendez, however, still thinks that honor belongs to Conor McGregor.

“Right now I rank him second, but he could very well be number one, easily,” Mendez said. “I rank him second behind Conor but I could be wrong on that. He could be more dangerous than Conor. We’ll see. If we’re not able to take him to the ground, we’re gonna have a fight on our hands. I’m anticipating we’re gonna have a fight on our hands because if I don’t anticipate that and it does happen, we’re gonna be caught not thinking properly. So I’m assuming we can’t take him down and we have to stand with him. That’s, in my mind, what I’m assuming. I’m hoping that’s not the case. I’m hoping we can take him down but we have to be prepared for times when we can’t.

“Conor’s just the best striker ever in the lightweight division, I think. Gaethje, with his wrestling, he creates a big problem. He really does. His power and his guts, the guy is coming to fight. He’s not gonna run from you, he’s coming to you, and if you’re not fighting him, you’re not beating him. You have to fight him and we’re prepared for that.”

Gaethje also appears to be preparing for something similar, saying he needs to create “a zone of death” in front of him against Khabib. Still, for Gaethje it boils down to the same situation as everyone else: can Gaethje stop the takedown? Thus far 28 people have tried and failed and ultimately, Mendez says there’s a big difference between collegiate credentials a decade ago and MMA wrestling right now.

“From a wrestling standpoint, I’m sure it’s not Division- level at the present time, but from an MMA standpoint I’m sure it’s as best as it can be,” Mendez said. “He may very well have the best takedown defense out of anybody because he has that wrestling background. But remember, this is MMA, so there’s a lot of variables to takedowns… If it was a pure wrestling match, I don’t know how we’d fare but this isn’t wrestling. This is MMA and there’s a lot of things you can do in MMA that you can’t do in wrestling.”

Finished. Israel Adesanya never expects Paulo Costa rematch: “I don’t think I ever see him again to be honest.”

The only big mouth is the guy that came up to me while doing PT, with his camera crew to talk tough. Or did you forget all of that? December I’ll show you it’s not all talk. https://t.co/jPP3czCi1z

Thank you Dana. All I can ask for is the opportunity from the fruits of my labor. December 12th will be a night I will never forget!#JamaicaWeDunLand https://t.co/OnIaCj39e0

You are right, December 12th will be a night you will never forget just like a December 9th of 2017 https://t.co/uitTadvZtJ

Anthony rumble Johnson shut up moron you even don’t know which weight class you should fight.

I don’t do the talking back and forth but the last BBC you did that to fucked your ass at the end DOGGY STYLE
Now your name is LOOSE BOOTY
You must want missionary next by me?
I respect you but make sure you know your role…
I’m not the 1 kid https://t.co/Gnby6j8Q5F

The #ENT Dr said I did a solid job on the #nasalrealignment. Should heal quickly! #UFCFightIsland pic.twitter.com/QWTSIRDgPW