1:38pm: The trade has been formally announced by both teams.

12:56pm: The Nationals have acquired first baseman Josh Bell from the Pirates in exchange for a pair of young pitchers, reports ESPN’s Jeff Passan. Right-handers Wil Crowe and Eddy Yean are headed to the Pirates in the deal, tweets MLB Network’s Jon Heyman. Jason Mackey of the Pittsburgh Post-Gazette first reported that the two teams were closing in on a trade. 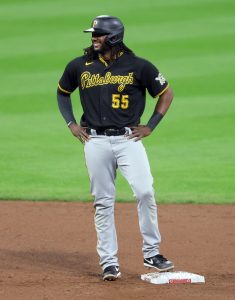 Bell, 28, fills the Nationals’ void at first base and gives the club a switch-hitting power bat to pair with Juan Soto in the heart of the order. Like most of the Pirates’ lineup, Bell struggled in 2020, hitting just .226/.305/.364 with a career-high 26.5 percent strikeout rate. However, outside of last year’s shortened season, Bell has been a productive big league hitter throughout his career.

The Pirates selected Bell with the 61st overall pick in 2011 and paid him a then-record $5MM signing bonus, shattering the recommended slot value to convince Bell to forgo his college commitment. The 6’4″ slugger rated as one of the game’s top prospects throughout his minor league tenure and was a productive hitter each season from 2016-18, posting a combined .260/.348/.436 batting line — good for a 110 wRC+.

In 2019, Bell erupted with a breakout, 37-homer campaign that led to his first All-Star nod. Tapping into the raw power for which he’d long been touted, Bell raked at a .277/.367/.569 clip, adding in 37 doubles and three triples while plating 116 runs in just 143 games played. It’s worth noting that he tailed off in the season’s final two months, and those struggles carried over into the aforementioned down year in 2020, but the Nats are buying here in the belief that Bell can be much closer to that 2019 All-Star who looked to be emerging as one of the league’s premier power bats.

Bell is eligible for arbitration for the second time this winter and has yet to settle on a salary for the 2021 campaign. He’s owed a raise on last year’s $4.8MM salary and is now under Nationals control through the 2022 season. The Bell acquisition gives the Nats an everyday option at first base, which could complicate any potential reunion with Ryan Zimmerman, although the two could certainly form a quality pairing at the position. Although Bell is a switch-hitter, he’s vastly better from the left side of the dish, so if the Nats want to bring Zimmerman back for a 16th season, “Mr. National” could move into a bench role and spell Bell against tougher lefties.

In return for two years of Bell, the Pirates will net an immediate rotation piece in the 26-year-old Crowe — a former second-round pick himself (2017). The 6’2″, 228-pound Crowe made his big league debut in 2020, starting three games for the Nats but being tagged for 11 runs in 8 1/3 innings. That’s a minuscule sample on which to judge Crowe, however. The right-hander has been considered one of the Nats’ best prospects since the day he was drafted. While he’s had knee and elbow injuries in the past — including Tommy John surgery while pitching at the University of South Carolina —  he set career-highs in starts (26) and innings (149 1/3) during his last full season in 2019.

Baseball America recently ranked Crowe 10th among Nationals farmhands, and was the team’s No. 3 prospect at MLB.com on their midseason rankings and No. 4 at FanGraphs. Eric Longenhagen and Kiley McDaniel wrote in that FanGraphs report that Crowe has three above-average pitches and a promising changeup but “imprecise control” of his arsenal and some durability concerns because of that injury track record. Crowe was hammered for a 6.17 ERA in his lone Triple-A experience, although that came while pitching in an outrageously hitter-friendly setting in 2019 — both due to the juiced ball in Triple-A and the conditions of Fresno’s park in the Pacific Coast League.

It remains to be seen whether the Pirates will plug Crowe directly into the rotation or give him some additional time in Triple-A in 2021, but it’d be a surprise if he weren’t called to the big leagues at some point next season. Pittsburgh currently projects to have Joe Musgrove, Mitch Keller, Steven Brault, Chad Kuhl and a returning Jameson Taillon in its rotation, though Musgrove, Brault and Kuhl have all been discussed in trade talks as well. Further transactions between now and Opening Day could very well to alter that composition to some extent.

The 19-year-old Yean is a much longer-term play for the Pirates, although it’s arguable that he’s the more appealing piece of the deal. Baseball America’s updated ranking of the Nationals’ farm has Yean two spots higher than Crowe, touting an “explosive” fastball that reaches 97 mph and could climb higher as he continues to grow. Yean throws both a four-seamer and two-seamer in addition to a slider and a changeup. Signed out of the Dominican Republic in 2018, Yean has the type of velocity, breaking ball and projectable frame typical of first- and second-round high school draftees, Longenhagen wrote for his Nats rankings at FanGraphs.