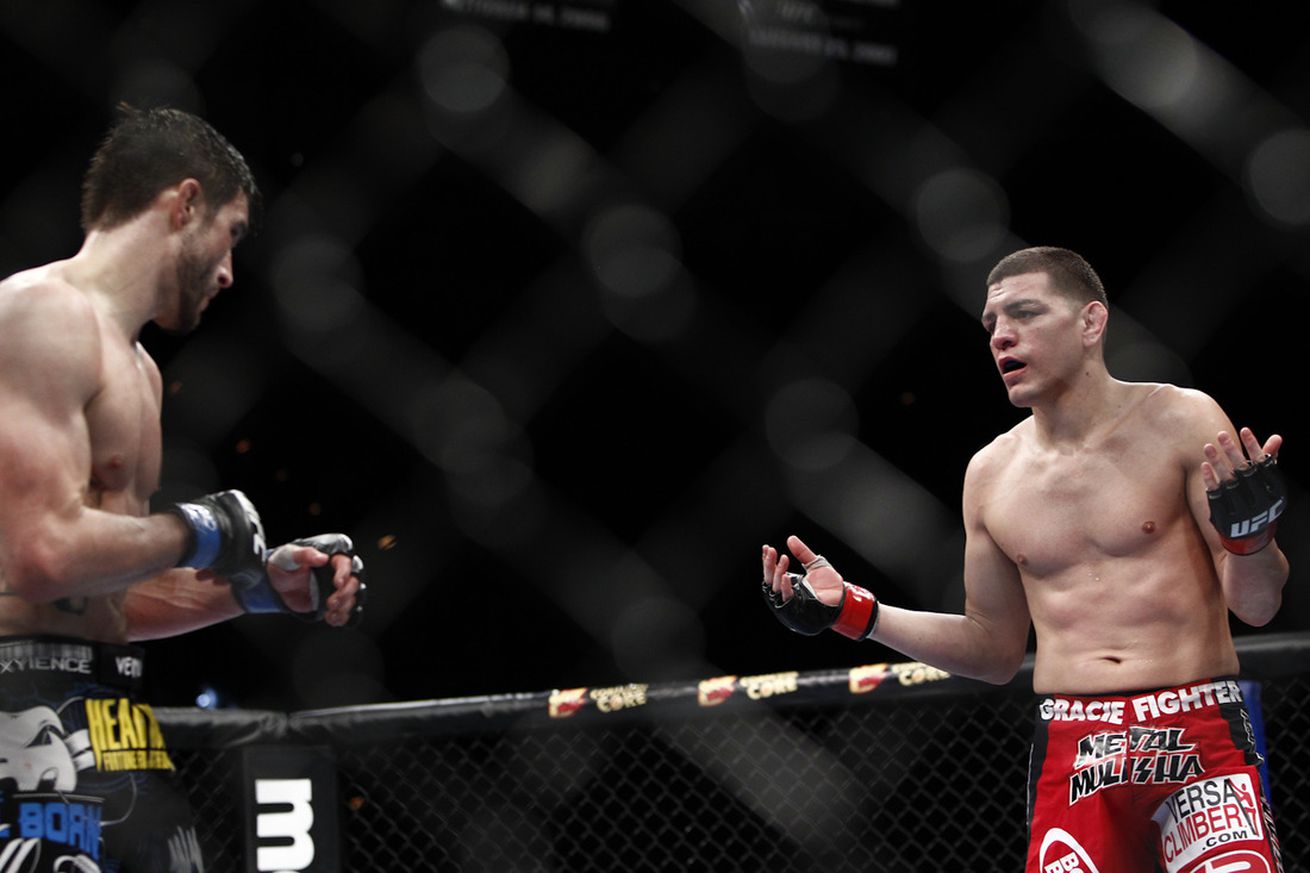 You knew this one was coming.

It started with a rumble. UFC welterweight star Nick Diaz, dormant for ages, suddenly sent out the feelers for a 2021 comeback. Despite not fighting since January 2015, the elder Diaz brother’s presence always lingered in the MMA atmosphere and now the prayers of so many Diaz disciples had finally been answered: Big brother Nick was back.

Immediately, I thought about his memorable interim UFC title fight against Carlos Condit at UFC 143 on Feb. 4, 2012 in Las Vegas. It was a fight that had troubled me for ages, one that in the moment I—and many others—was certain that Diaz had won. But the scorecards went in Condit’s favor and that verdict was a major lesson for me in how effective striking, countering, and octagon control were evaluated. I thought I’d seen a robbery, but I soon realized that I didn’t understand the finer details of that fight.

Fast forward to now, with Condit set to fight on Saturday against Court McGee at UFC Fight Island 4, and I find myself with the perfect opportunity to finally review that controversial contest. Condit himself has even recently mentioned putting the controversy to rest with a future rematch.

Before we get any further ahead of ourselves, let’s put Condit vs. Diaz under the microscope in this edition of Retro Robbery Review.

That this did not devolve into a brawl may have been disappointing to some fans, given that Condit and Diaz had reputations for incredible knockouts and violent wars. But they always brought a ton of skill to their fights too and it’s that aspect of their games that was on display in this encounter.

The rhythm of the dance was established early. Diaz walked forward the whole time and Condit’s game plan was to circle, circle, circle… Condit used leg kicks perfectly to score from range, but Diaz was throwing hands and connecting in round one. Still, Condit stayed out of the danger zone for the most part and he was touching Diaz up in his own right. It’s hard to tell just how many of Diaz’s straight punches actually got through. It didn’t take long for Diaz to drop his hands, open his stance, and invite Condit to throw down. Condit didn’t bite.

Into round two, Condit just kept chipping away at that lead leg and it was obvious that his strategy was to avoid a head-on confrontation and to frustrate Diaz. It seemed to work as Diaz definitely had trouble figuring Condit out. He continued to taunt, but failed to connect with much meaningful offense. Every time he did land a clean shot, Condid had an answer. While Condit did an excellent job of avoiding attacks, Diaz was content to walk through them.

As the fight progressed, neither fighter wavered much from their approaches. Condit found a home for almost everything he threw, but Diaz’s head-hunting was paying dividends in spurts. However, he settled into a rhythm in which he would walk Condit down and land one or two punches, only to be countered and have Condit slip out of his reach. Condit’s attacks were more diverse. Were they more effective? One thing is for sure, while Diaz was the one walking forward, it’s Condit’s movement that dictated where the fight was taking place.

Condit was always filling the space with leg and body kicks, as it were. Which is to say that he was constantly giving the judges something to score and in a fight like this, it made all the difference. Another key factor is that Diaz never consistently cut Condit off. And it’s not as if Condit didn’t land some big shots either. The most memorable moment of the fight was likely the gorgeous leg kick-high kick combination that Condit scored with about 90 seconds left in round four.

Round five and Condit was still circling, circling, circling. He matched Diaz’s legendary cardio and based on his steady output, arguably outworked Diaz. Condit was right at the edge of Diaz’s kicks and when Diaz got lazy with his defense, Condit lit him up. A late takedown by Diaz gave him the opportunity to show off his excellent jiu-jitsu, but Condit avoided a choke attempt and actually ended the round on top. Afterwards, they stood up and showed respect to one another.

That sentiment carried over even after the decision was read, though Diaz did express frustration over Condit’s tactics even as he praised Condit’s character. This was also where Diaz first retired, saying that he didn’t “want to play this game anymore.”

Judges Patricia Morse Jarman and Cecil Peoples both had identical scorecards for Condit, 49-46, giving the third round to Diaz. Junichiro Kamijo scored it 48-47 for Condit, with rounds two and five going to Diaz on that card.

Where Diaz supporters would probably like to point to is his advantage in head strikes, though even there it’s slight. He landed 57 strikes to the head compared to Condit’s 52, edging out that category in each of the first three rounds. He also landed more body strikes, 42-31. However, Condit had an absurd advantage in leg strikes, landing 68 to Diaz’s six.

Diaz was credited with the lone successful takedown of the fight at the end of round three.

Of the seven media member scores listed on MMA Decisions, six scored it for Condit and one for Diaz. MMAWeekly.com went as far as to go 50-45 in favor of Condit.

Sherdog.com’s Freddie DeFreitas scored the fight 48-47 for Diaz, giving him rounds one, two, and five.

The closest round was the first, which 58 percent scored for Diaz. Condit’s round four was the most definitive as 92.2 percent of voters gave him that frame.

Below, you can see how some noted MMA personalities reacted to the decision at the time.

Wow, I would not want to judge that one. I had it even after 4. And diaz in the 5th

If I wanted to see a man run for 25 minutes I’d go to a track meet. Diaz is the real champ, what a bullshit fight

I thought Condit won the fight I know Diaz is pissed but Condit had a solid game plan that worked, I thought he won for sure

I eagerly await fight metrics for this fight… I thought Diaz won that all night long.

That decision was an absolute joke. At best, Condit won 2 rounds.

Diaz wins via ring generalship, one moving forward, one moving backward. Ala delahoya vs Trinidad in my opinion, it’s 3 opinions that judge

Upon review, I can see why I thought Diaz won; I can also see now why I was so, so wrong.

Through my relatively inexperienced eyes, I saw Diaz’s head strikes as being more damaging. And I definitely had an incorrect reading of the octagon control portion. It wasn’t until reading analysis of the fight afterwards and then re-watching it now that I can appreciate just how masterful Condit’s control of the action was.

Credit to Diaz for constantly pressing forward, but that’s exactly what Condit wanted him to do. There was just no point where he was in serious danger. While the same could be said of Diaz, he was indisputably on the losing end of the volume battle and you don’t need the stats to tell you that. Simply put, Diaz was as close to finishing Condit as Condit was to finishing him, which is to say, not very.

This time around, I gave rounds two, three, four, and five to Condit.

Firstly, credit to Joe Rogan for correctly assessing what Condit was doing the whole fight. In round four, he noted that Diaz and their corner should be worried about him losing a decision. He was right.

Sorry Diaz fans, after review I just don’t see how a strong case can be made for a Diaz victory here. Maybe you give him the first three rounds because of the head strike advantage? But that requires you to ignore so many other factors. Maybe you give him the final round for the late takedown, but can you imagine a Diaz brother arguing that they deserved a round because of a takedown?

Call Condit’s striking “pitter-patter” if you will. The truth is Diaz couldn’t string together much of consequence himself and unless you’re scoring by Stockton street rules, Condit was the better man at UFC 143.

Not a robbery. Condit won.