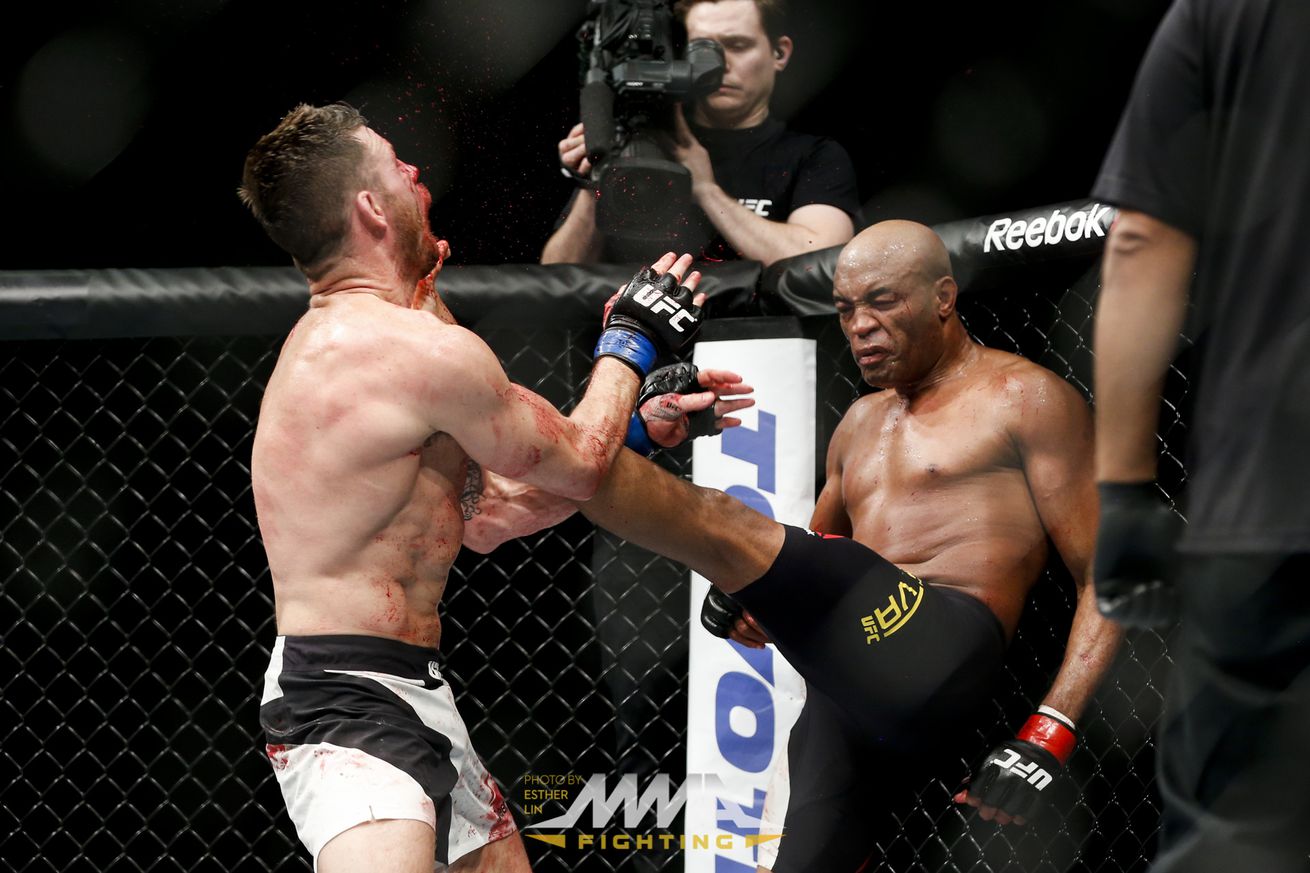 It was a fight Michael Bisping had chased for years. One of the middleweight division’s most popular fighters for the better part of a decade, “The Count,” always seemed to be one big win away from that elusive title shot against Anderson Silva. Time and time again he fell just short, but the stars finally aligned for the two to meet at a UFC Fight Night in London on Feb. 27, 2016.

By this time, Silva no longer held a UFC title and Bisping was in the midst of a winning streak that would lead to a shocking upset of Luke Rockhold four months later. This fight was booked as an entertaining aside, but it would end up becoming one of the most memorable bouts of both men’s careers.

Bisping outpointed Silva to earn a decision that remains controversial to this day, particularly for a moment near the end of the third round in which… you know what? Let’s just go to the tape and see what all the fuss was about.

It’s well known that Bisping had never lost in his native England prior to this bout, but Silva never had either. The Brazilian went 4-0 for London’s Cage Rage promotion before joining the UFC. Something had to give.

Bisping took the center, which wasn’t surprising given Silva’s counter-striking style and his respect for Bisping’s standup. He clipped Silva with a quick left hook, drawing a smile from “The Spider” that woke up the former middleweight champion. Bisping was landing a lot more than many of Silva’s previous opponents, but Silva’s legendary chin was on display and you still got the sense that it was only a matter of time until he downloaded Bisping. Lots of points for Bisping in round one as Silva started to loosen up. There’s also a great moment where Silva went for a hug after the buzzer and Bisping just backed him up with a shove to the chest.

Round two, Silva started playing patty-cake with his hands, which is fun to watch but Bisping kept up the pressure and didn’t play into Silva’s mind games. When Silva tried to lure Bisping over to the fence, Bisping just backed up with his hands on his waist and welcomed Silva to engage. Silva was having a ton of fun, maybe too much, though he did catch Bisping with some unorthodox stuff. Was he throwing enough though?

It’s a moot point as Bisping cracks Silva with a 1-2 for a clear knockdown in the final minute of round two. That’s at least one round for The Count. It’s worth noting that for the most part, Silva didn’t land anything too substantial for the first 15 minutes; of course, that would all change as round three came to a close.

After a fairly even third frame, Bisping made a fatal error in the closing moments as he was distracted by the loss of his mouthpiece. Silva opened up and attacked Bisping against the fence, not giving time for a pause in the action, and when he backed off for a second Bisping gestured in referee Herb Dean’s direction. Dean did not call for a break in the action and with seconds left in the round, Bisping left himself open for a flying knee that left him slumped against the cage.

A buzzer sounded. Silva thought he’d won as Bisping was slow to get up, but the fight was never waved off. Bisping would later blame himself for making what he called “a rookie mistake.” And so the fight carried on.

Silva did not look to pounce on a wounded Bisping, instead sticking with the methodical approach he’d implemented throughout the fight. In contrast, Bisping cranked up the volume, perhaps realizing how close the fight was to being over. Silva countered effectively, but was still getting touched up a lot. At a glance, it looked like Silva was looking for another home run strike.

In the fifth, Silva came out throwing bombs. Bisping defended well, but his beaten and bloody face painted a rough picture. Two minutes in, Silva popped him with that Seagal front kick to the face and now it’s Bisping whose famed chin was put to the test. A takedown by Bisping went nowhere, leaving Silva with one minute to finish Bisping or put an exclamation point on his performance. The ending was somewhat anticlimactic, though all in all it was an incredibly dramatic duel.

All three judges, Ben Cartlidge, Jeff Mullen, and Andy Roberts, scored it the same: 48-47 Bisping, with The Count taking rounds one, two, and four.

The striking stats reflect the judges scoring accurately. Bisping had a considerable advantage in significant strikes in rounds one (17-8), two (24-11), and four (28-19), while Silva had the knockdown in the third and battled Bisping to a near standstill in the fourth (19-18 Silva). In the second round, Bisping was credited with a knockdown.

For the most part, those scoring in the media saw no issue with the official decision according to MMA Decisions. Only five scored the fight for Silva, with FightLine.com giving him a 49-46. There was one draw suggested, while 16 others agreed with the 48-47 Bisping score.

Going round by round there wasn’t much disagreement, with round four being the closest (69.2 percent in favor of 10-9 Bisping).

Here’s what some of their peers had to say at the time:

I gotta rewatch rnd 4 again that I think was the key round to determ who Won , my initial reaction was AS But gotta watch #eddiealvarez

Great fight. Judges got it right. Can’t take off 90% of the fight. @bisping just showed how to rally. #UFCLondon

Wow! Good for Bisping but thought Anderson had last 3 rounds. He deserved it if you base it on complete effort.

At this point you might have noticed a trend in that there really isn’t much dispute when it comes to scoring the five rounds based on the given criteria. Bisping was sharper in rounds one and two and took advantage of an oddly tentative Silva in round four to recover from the third round knockdown.

Silva clearly won the third with his flying knee at the buzzer and though he only had a slight advantage in significant strikes in round five, he appeared to be landing the harder shots and certainly did score the most damaging one when he front-kicked Bisping right in the face.

So why the controversy?

Silva won the fight in the third.

I mean, not actually, but if Silva capitalizes on that Bisping mistake at any other point in the fight, the bout is either waved off immediately or Silva would have had plenty of time to land a few follow-up strikes to end things properly. He only walked off because he appeared to confuse the round buzzer with Dean waving the bout off (it has to be noted that Dean never made any sort of gesture that would indicate the fight was over, something Dean noted in a subsequent interview).

That moment, and Bisping’s crimson mask, are why Silva supporters like to point to this one as evidence of Bisping getting some home cooking, but it was really just bad luck and bad timing for Silva. If it’s any consolation, he wins on PRIDE rules, having landed both the most significant strike of the fight and taken the final round; however, with the scoring system that’s currently in place, he didn’t do enough to eke out the win and Bisping deserved it for his incredibly gutsy effort.

Not a robbery, even if Bisping was saved by the bell.