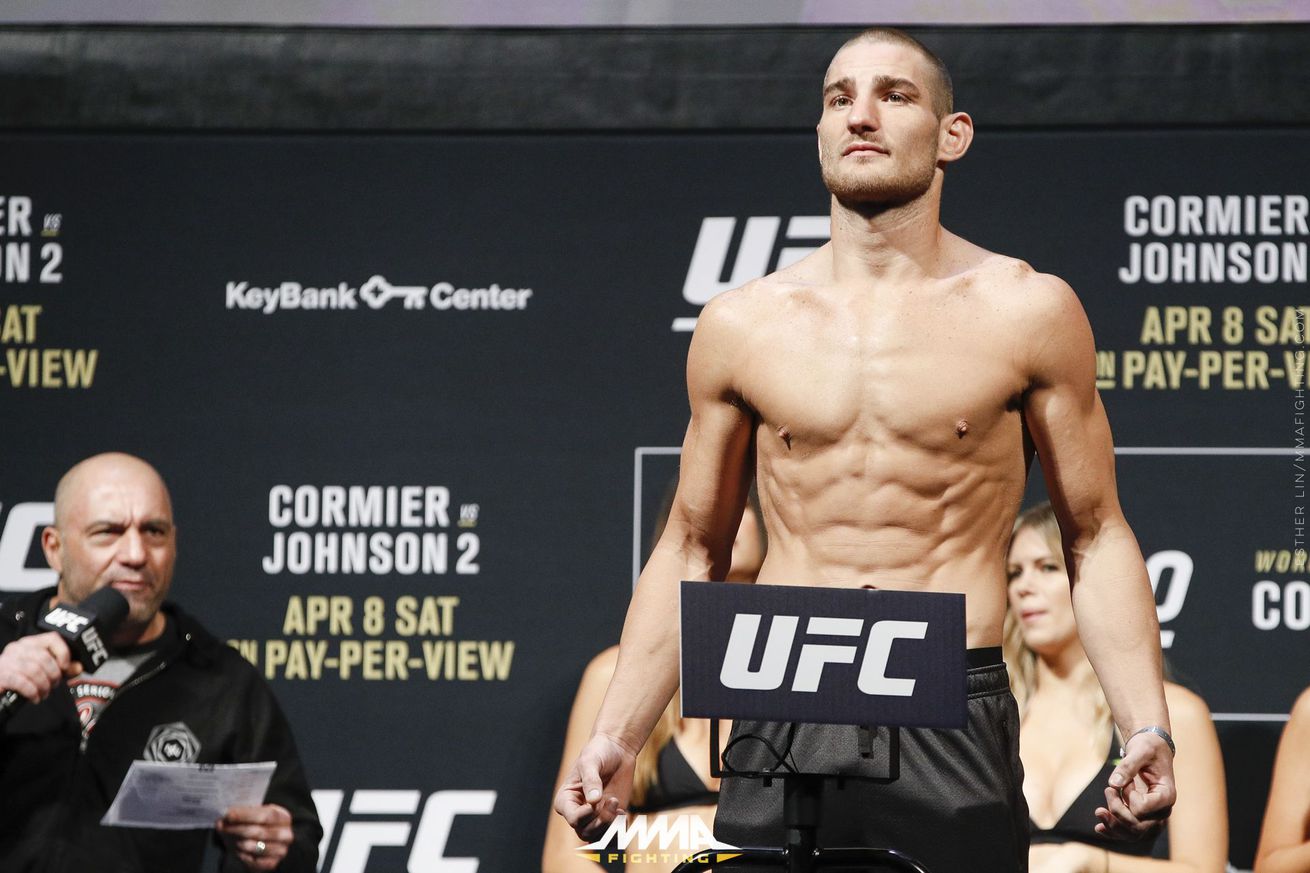 As Sean Strickland woke up in a haze, he saw a police officer and a group of doctors standing over him.

The UFC veteran had no memory of how he got there but he was laying in a hospital bed when the cop told him that he had been in a serious motorcycle accident. Before he could really wrap his head around that statement, doctors were telling Strickland that he was being admitted for emergency surgery to repair massive damage done to his leg.

“I left some of my kneecap on the road,” Strickland revealed when recounting the accident with MMA Fighting ahead of his return at UFC Vegas 12.

According to Strickland, he was leaving a sparring practice at the gym and he was on his way home when a van pulled out in front of him while he was going 45 miles per hour. The accident wasn’t his fault but Strickland definitely took the brunt of the damage as he fell unconscious for several hours afterwards.

He barely had time to open his eyes before being wheeled into surgery to hopefully repair his leg, which was essentially ripped apart after the car crashed into his motorcycle.

“I had a doctor coming up to me saying ‘you’re going to surgery’ and at that moment I started crying a little bit,” Strickland said. “I don’t know if it’s just the life long battle with depression that fighters have but I just remember waking up like ‘f**k, I hope I can fight again.’

“As far as the actual accident, that wasn’t so traumatic but just waking up to ‘you’re going into knee surgery.’ That was the thing that really stuck me hard. The only thing I’ve ever done in life was be a loser and be an MMA fighter. That hit me hard.”

A year ago a van turned out infront of me while going 45, I woke up in the hospital with my knee cap chipped and dangling by my shin. So greatful for everyone in my life keeping me going. You guys all rock its a long long road still but hey you only live once! #knee#kneesurgery#harley#hd#motorcycle#motorcyclecrash#wreck#er#recovery#greatful#mma#ufc#bjj#kickboxing#wrestling#watchforbikes#ride#riding

While he avoided a head injury, Strickland’s knee was in really bad shape after the accident. Even after the initial surgery was completed to repair his knee cap, Strickland later found out that his leg was still damaged as a result of the accident.

“Then I got an MRI like three months later just to see how everything was and I still have a pretty big quadricep tear. But that would have put me out for another year and a half so I just said f**k it, I’ll just deal with it.”

Initially, Strickland was told by his doctors that recovery was the only thing to focus on because fighting should probably be the furthest thing from his mind.

“Let me just tell you this — every doctor I talked to said I shouldn’t fight again,” Strickland said. “The only ones that were really supportive of me coming back to the gym and coming back to fight were all the people at the UFC Performance Institute.

“They were like a bright light to me. I’d go there and I couldn’t even walk up the stairs and they’d say ‘you’ll be back, you’ll be all right.’ It sucked.”

Came across this the other day… I miss you baby :’/ #RIP#hd#wreck#harley#harleydavidson#motorcycleaccident#watchformotorcycles#surgery#riding#ride#imissyou

Despite essentially being forced to walk on one leg, Strickland refused to give up so he made the best out of a really bad situation.

“If you look at my Instagram there’s a picture of me boxing 12 weeks after my injury with a knee brace,” Strickland said. “The doctor was like your patella tendon will tear if you bend your leg but other than that you’re OK, just don’t bend your leg.

“So I was like f**k it. I put a straight leg brace on to lock it out and I was boxing 12 weeks after my injury.”

That might sound like a miraculous turn of events but boxing on one leg was a far cry from actually fighting again.

For all the belief he tried to instill in himself that he’d one day walk back into the UFC octagon, Strickland says self-doubt would often creep into his mind.

“There was times [when I thought I’d never fight again],” Strickland said. “When the doctors would tell me I still have the tear [in my quad]. There was times like even now after a hard day of training, I’ll prop my leg up on the dashboard while I drive just because of all the damage to my leg. It just throbs. There are some days where I’m like damn.”

Nobody could have blamed Strickland for expressing rage, anger or at least frustration at the situation given how much of his life he’s dedicated to fighting.

Rather than pity himself for all that went wrong, the 29-year-old middleweight started thinking about other fighters who faced real physical adversity yet found a way to overcome it.

“I have nobody else to blame. I was on a motorcycle. I was a f**king idiot. I did it,” Strickland said. “So at the end of the day, it’s like I did this to myself. I made my bed and it sucks but you only live once.

“I mean there’s a guy [Nick Newell] who fights with one f**king arm and he does it well. [Michael] Bisping won the title with one f**king eye. I got a leg that works. Not the best but it works. You just can’t be a b*tch your whole life.”

Slowly but surely Strickland started getting a better range of motion in his surgically repaired leg and training got a little easier. He never imagined it would take him two years to fight again, but at the 12-month mark, Strickland started to really believe that all the hard work was paying off.

“After about a year, I started thinking to myself, I can feel better again. I can do this,” Strickland said. “Something will happen where I’ll have a bad day or I’ll wake up and my knee is throbbing and it will set me back. But for the most part in life, humans are capable of so much and a lot of our limitations are what we put on ourselves.

Eventually, Strickland was well enough that he was able to have his management team contact the UFC to begin looking for a date, location and an opponent.

After inking his first bout agreement since 2018, Strickland admits there was almost a euphoric feeling to know he was going to fight again. On Saturday night, he will face Jack Marshman at UFC Vegas 12, but no matter the result, Strickland already feels like a winner.

“I started training at 15. I dropped out of school at 17 to be a fighter. This is literally the only thing I f**king know,” Strickland said. “To me it just feels like something I’m supposed to be doing. I feel good.

“I’m grateful that I can still do it. I’m grateful to the UFC to let me get back in there after two years off. It feels good. I’m not having to say welcome to Walmart, paper or plastic.”