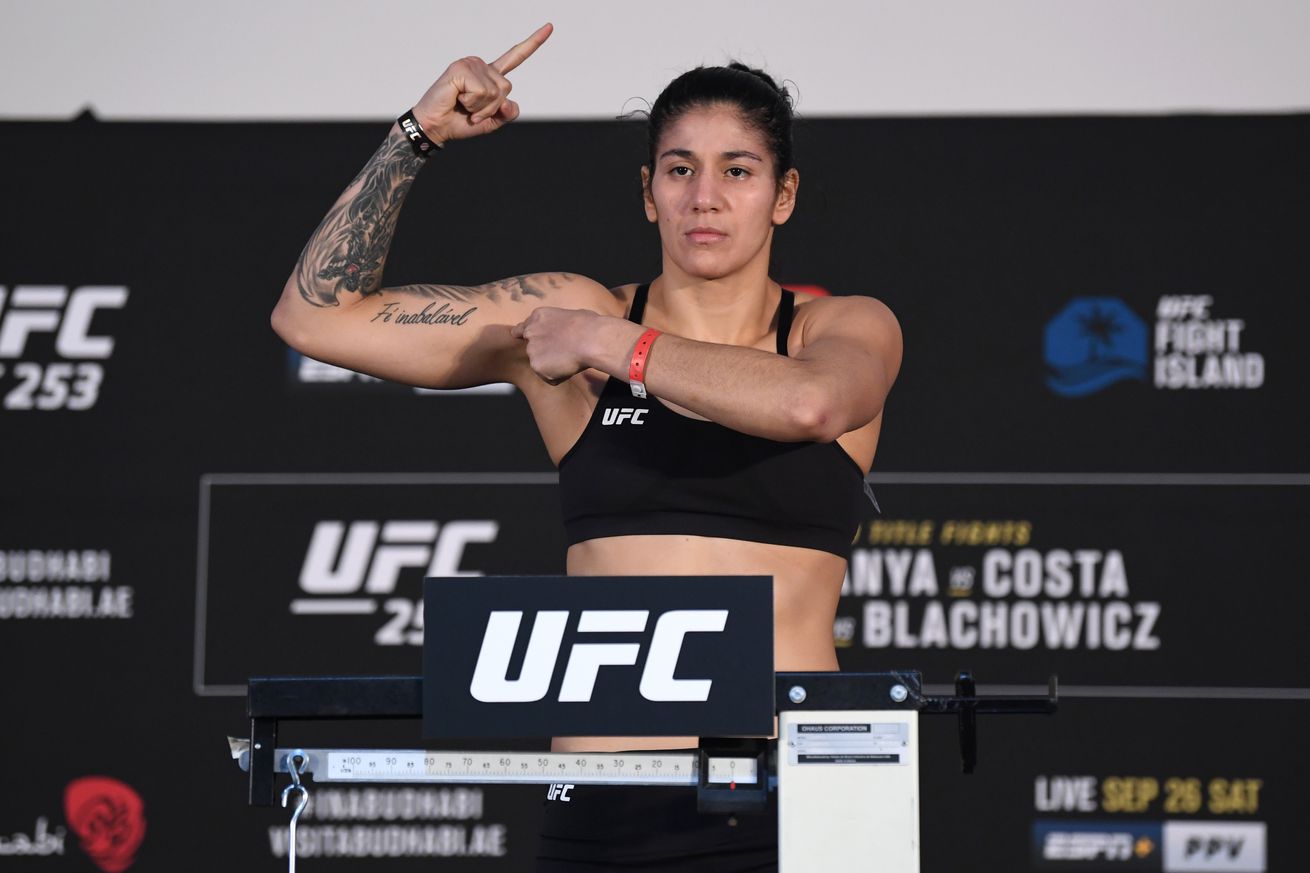 When the novel coronavirus pandemic took the world by storm earlier this year, Ketlen Vieira defended that the UFC should pull the plug on its scheduled events before the company was eventually forced to do it.

Back to action after a couple more fight cancellations, Vieira admits she still doesn’t feel 100 percent comfortable traveling across the globe to trade hands with Sijara Eubanks, her opponent at Saturday night’s UFC 253 in Abu Dhabi, U.A.E.

“It’s never safe because we’re scared, we’ve seen many fights fell through because someone tests positive but has no symptom,” Vieira said in an interview with MMA Fighting, “But I saw that life has to continue, that the UFC was giving people opportunities to fight, so I decided to get back to training in a safer way, with a small group of people, so we moved on. It had to be like this, we couldn’t just wait. It’s time to move on.”

Days after Vieira’s phone interview with MMA Fighting, her longtime coach Andre Pederneiras tested positive for COVID-19 and will no longer be allowed in the arena on fight night. Vieira will only have former Bellator champion Marcos Galvao in her corner now.

The Nova Uniao fighter was originally booked to face Marion Reneau in May, and used those extra months as an opportunity to “evolve” and mature as a fighter.

“I still have a lot to learn, MMA has something new every day, new things to add to the game and learn, so I’ve used this time to evolve in a positive way,” Vieira said. “I didn’t want to fight in the beginning, I thought it would be best to cancel the fights in May because I knew I wouldn’t be prepared and we didn’t know this disease yet, everything was so new.

“We still don’t know that much about it, but it was even worse back then. We just knew its dangers and that it came so fast and took so many lives. We’ll always have fights in our career, but my biggest concern was my health and those around me. When time went by and fights kept getting cancelled, I used this time to evolve.”

Vieira was “glad” that Eubanks agreed to face her on short notice when Reneau withdrew from the Fight Island pay-per-view, and sees very similarities between the fighters.

“Sijara is a high-level jiu-jitsu black belt like Marion Reneau,” Vieira said, “But she prefers to go for takedowns whereas Marion prefers to fight off her back since she has a great triangle, but that’s why it’s so important for us to be ready for everything. I’ve trained for every situation and I’m happy to be fighting after so long. I’ve been trying to fight since May and this pandemic took us by surprise, but thank God I’m fighting now.”

“Fenomeno” was close to getting a shot at the UFC bantamweight title after winning four in a row in the UFC, capped off by victories over former title contenders Sara McMann and Cat Zingano, but a knockout loss to Irene Aldana in Dec. 2019 dropped her back a few spots on the race.

Eubanks has made the best of her time in the UFC in 2020, earning decisions over Sarah Moras and Julia Avila since the company resumed doing cards during the pandemic in Jacksonville and Vegas’ UFC Apex.

“I’m not even thinking much about [title shots] because I was on a four-fight winning streak, beat the only fighter to beat the champion [in the UFC] and still didn’t fight for the belt, so it’s not this win that will give me,” Vieira said. “I just want to fight and evolve, get more loose inside the octagon and become a complete athlete. If I keep winning and evolving, it’s going to be inevitable.”