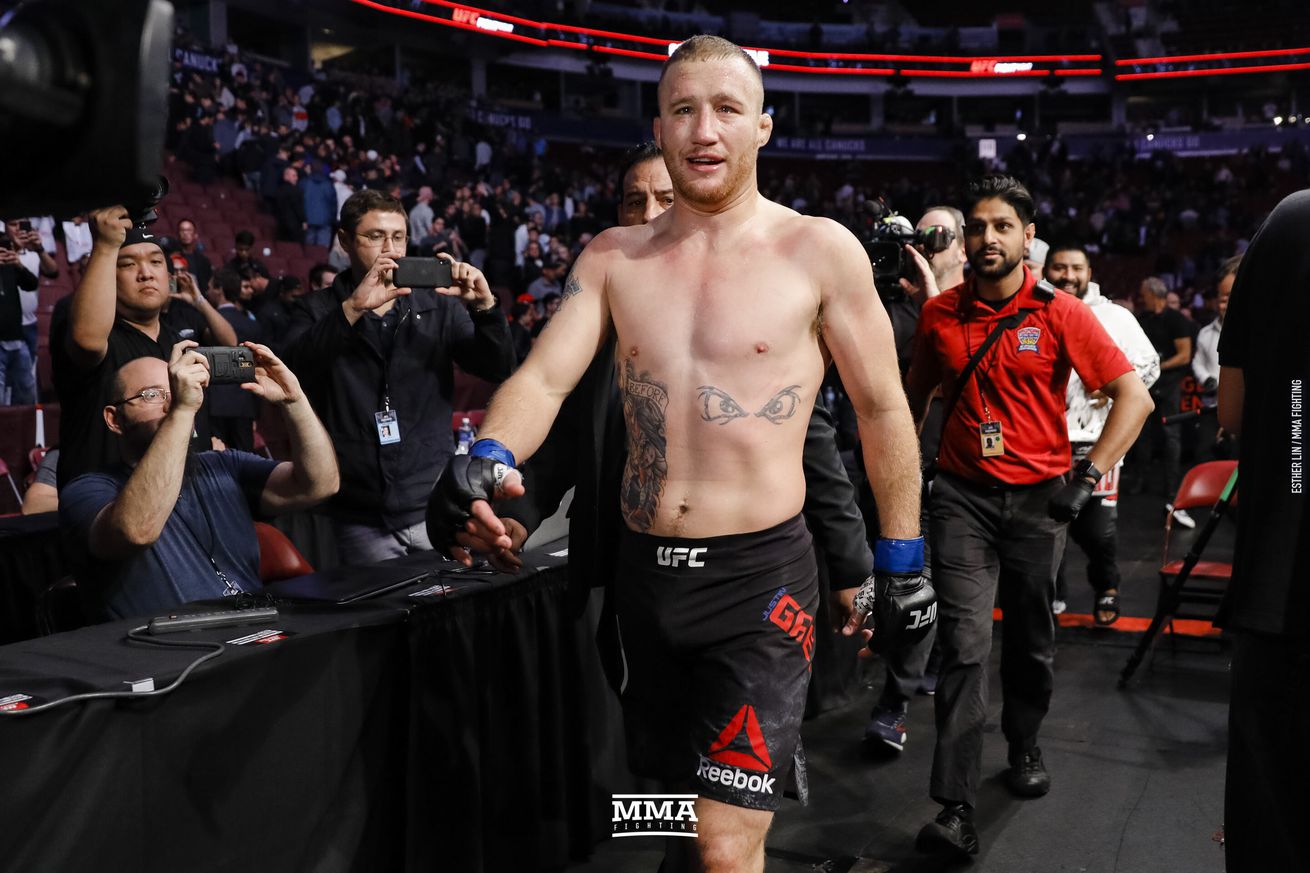 The formula for beating Khabib Nurmagomedov should be simple. Have good cardio, don’t get taken down, and give him the occasional knock on the chin to get his attention.

Using that equation, Justin Gaethje appears to be the man best equipped to finally hand Nurmagomedov a loss. “The Highlight” has inhuman endurance and punching power, and while a pair of losses on his record certainly reveal him to be human, the four-fight winning streak he’s on have gone a long way to restore Gaethje’s reputation as arguably the most feared man at 155 pounds.

But if we’re talking reputations, there’s really none that can match up to the 28-0 that sits next to Nurmagomedov’s name. Even going beyond just the number itself, Nurmagomedov’s lopsided wins over the likes of Dustin Poirier, Conor McGregor, Rafael dos Anjos and nine other UFC foes tells a tale of an athlete who was bred to do one thing and one thing only: win fights.

When Nurmagomedov and Gaethje meet in Saturday’s UFC 254 main event in Abu Dhabi, it will not only be to unify their respective titles (Nurmagomedov enters as the undisputed champion while Gaethje is the interim champ after defeating Tony Ferguson in May). But it could be a defining moment for both men. Nurmagomedov can take one more step to the magic number of 30-0 that could cap off his illustrious career by defeating a man many consider to be his perfect foil, and Gaethje could cement his place among the immortals as not only one of the most exciting fighters of his generation, but also one of the best.

Given the magnitude of the main event, one could be forgiven for neglecting the high stakes of the middleweight co-headliner between Robert Whittaker and Jared Cannonier. Current 185-pound champion Israel Adesanya has already marked Cannonier as one to watch for his next title defense, but it’s Whittaker who’s held onto his No. 1 contender’s spot after dropping the title to Adesanya last year. A Whittaker win makes things a lot more complicated for the matchmakers.

A bold take, I know, but what else can one say ahead of any of Nurmagomedov’s fights? There is simply no one in MMA today who uses wrestling as effectively as he does. Yes, Gaethje is a great wrestler. In fact, he’s the first Division-I All-American that Nurmagomedov has ever fought. Maybe he can stop a takedown or two. But Nurmagomedov’s brilliance is reflected in both his determination and flawless technique.

Add in the fact that Nurmagomedov is strong like bear and you can envision Gaethje holding him off for a couple of rounds and maybe even landing a few good shots before he’s put on the mat just like all the others. He’s difficult to hold down, but Gaethje has never dealt with a wrestler of Nurmagomedov’s caliber. The feeling that Gaethje’s opponents get when he’s walking them down and threatening with those dynamite fists? That’s the same feeling everyone has when Nurmagomedov gets a hold of them.

I don’t expect Nurmagomedov to finish Gaethje, and “The Highlight” might even become just the second UFC fighter to take a round from Nurmagomedov. But in the end, the result will be the same.

Nurmagomedov wins. All that changes is the number in the win column.

Did I miss the memo in which everyone decided that Robert Whittaker was no longer one of the top two middleweights in the world?

I’d write “with all due respect to Jared Cannonier,” but he’s already been getting enough of it in the lead-up to this fight as it appears that there’s a lingering assumption that this is all simply a formality before he gets the contract to take on Israel Adesanya. The thrill of anointing a fresh challenger is understandable, let’s just not lose sight of what Cannonier has to deal with on Saturday.

“The Reaper” is an absolute force on the feet, with power in both hands and the ability to generate that power from a number of unorthodox angles. He utilizes a lot of movement, which will put Cannonier’s cardio to the test. Cannonier has proven he can deal with an elite striker; he holds a win over Anderson Silva. But at this stage of their respective careers, Whittaker is clearly Silva’s superior.

There are reasons that Cannonier is a safe pick though. He has incredible timing on his strikes and good defensive skills. If Whittaker wants to engage in a more tactical battle, Cannonier will be right there with him. And if the fight turns into a brawl, then we’re entering unpredictable territory. Whittaker can swing with the best of them, but have his recent wars worn him down? Cannonier has the punching ability to reveal just how much iron is left in the former champion’s chin.

Call this a conservative pick, but I just can’t look past Whittaker until I see him lose to someone not named Adesanya. I may soon regret this decision.

I’m not convinced. Volkov is fundamentally solid on the feet, and he uses his reach as well as any big man in the UFC. He’s not going to wow anyone with his explosiveness, but when he establishes range, he can do some serious damage and certainly has enough pop in his fists to put Harris down. I’d give the speed advantage to Harris, though, and his conditioning should be improved for this fight given the difficult circumstances leading up to his most previous one.

There’s a good chance that Harris can catch Volkov with something flashy, or maybe even overwhelm him right out of the gate. But I like Volkov to set the pace here and make this his fight. Harris hasn’t thrived in 15-minute fights, and I don’t expect him to get the nod here either.

This is about as raw as a main card matchup gets, folks. Both men are making their UFC debuts, with Jacob Malkoun doing so in just his fifth pro bout. Phil Hawes finally steps into the octagon after being through the prospect wringer. The 31-year-old failed to make it into The Ultimate Fighter house four years ago, made appearances for Bellator, World Series of Fighting, and Brave Combat Federation, and earned a contract in his second Contender Series shot.

Do with this information as you will.

Skill-wise, Malkoun projects as a solid all-arounder having both competitive grappling and pro boxing experience. He’s used to facing more experienced opponents, so Hawes having twice as many fights as him shouldn’t rattle him. Hawes’ wrestling and quickness are more cause for concern.

There’s a reason Hawes has registered as such a tantalizing prospect for so long and his past shortcomings are somewhat excusable given that they came against legitimate competition (current UFC fighters Andrew Sanchez and Julian Marquez stifled his big league dreams in the past and he also has a loss to future PFL champion Louis Taylor). Game planning will be key to keeping him on track, especially against an opponent with a dearth of film to study.

If Hawes favors position over submission and conserves his energy in the standup, he should win this one. If he’s not careful though, Malkoun could catch him with a submission on the ground. I’ll go Hawes, but Malkoun is a wild card.

Stepping in on a little over a week’s notice for Cynthia Calvillo, Uzbekistan’s Liliya Shakirova brings some promising skills to her UFC debut. She can fight orthodox and southpaw—though she’s more comfortable putting her weight behind her right hand—and she has a strong power double. However, she’s still a work in progress and that’s going to show against a veteran like Lauren Murphy.

On the feet, Murphy has the advantage in the boxing department. She’ll punish an eager Shakirova while stuffing her takedown attempts and exposing her limitations, especially with a short camp. As the fight goes on, Murphy’s advantages will only become more pronounced while Shakirova will gain some valuable, if painful, cage time. Outside of Murphy carelessly getting caught by a Shakirova overhand, this should be a comfortable win for “Lucky.”

Here’s what I wrote when Magomed Ankalev and Ion Cutelaba were supposed to have their rematch at UFC Vegas 8 two months ago:

After what happened last time between these two, making a prediction as to how their rematch could go seems almost silly, doesn’t it?

The intense pre-fight antics between Magomed Ankalaev and Ion Cutelaba were overshadowed by—with respect to referee Kevin MacDonald—one of the worst stoppages in recent history. Prior to that, we were getting the best possible outcome between these two light heavyweights, a wild scrap filled with head kicks and haymakers that was only given seconds to play out.

I predicted their first fight would be dictated by Ankalaev’s grappling and I still see that being the case here. There will be entertaining exchanges on the feet, but if Ankalaev can avoid an early stumble, his wrestling will allow him to stay out of trouble should Cutelaba get his hands going. I’m going with my original prediction of Ankalaev by decision, but really, it’s anyone’s guess how this bizarre saga will end.

So far both the first and last sentences of that prediction have held true. The rematch has been postponed three times now for coronavirus-related reasons, with the pandemic causing the cancellation of an April 18 booking, and then positive COVID-19 tests forcing Cutelaba out of re-bookings on Aug. 15 and Aug. 29. That last instance happened on fight day!

I’m still picking Ankalaev for the reasons listed above, but at this point I’m not comfortable predicting that this fight will even happen.