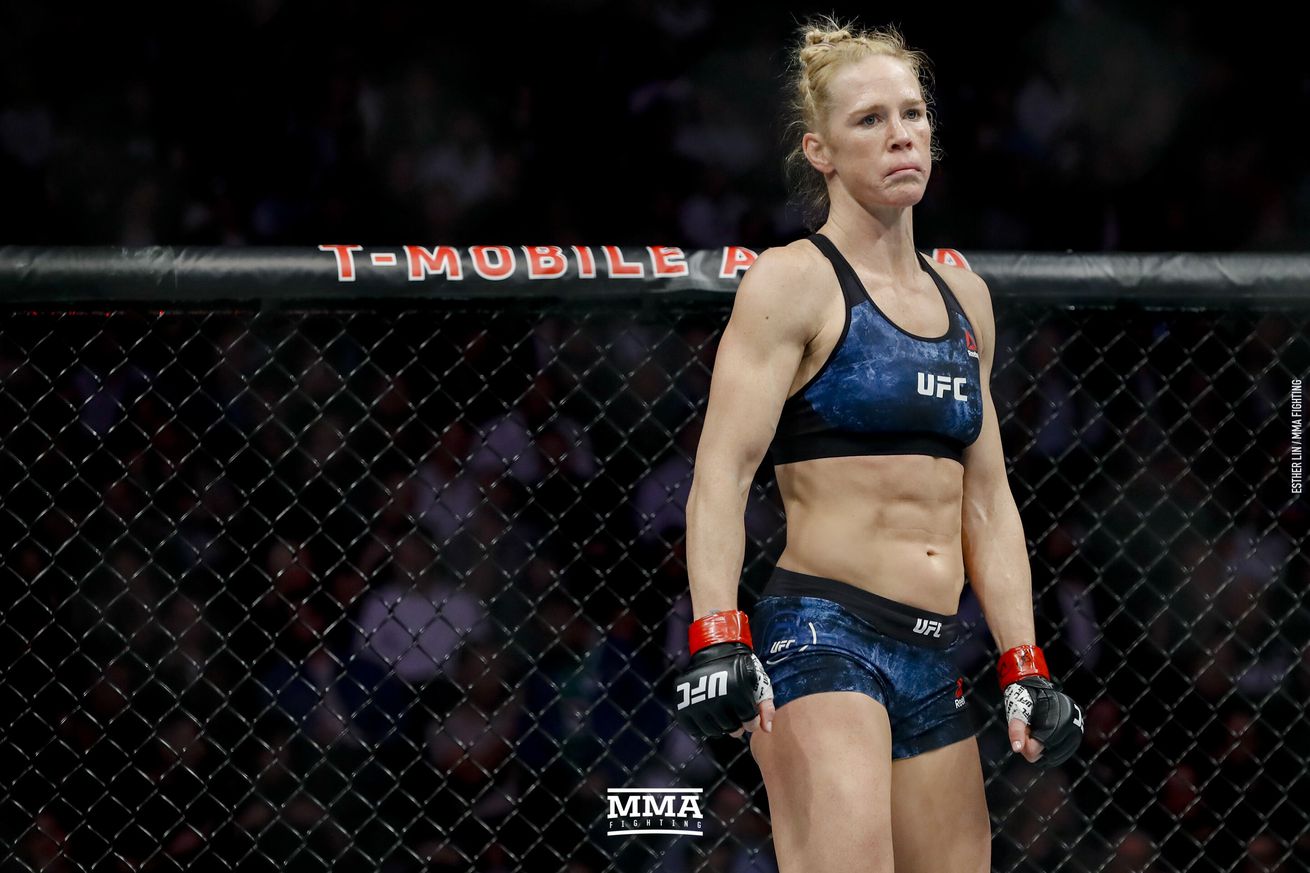 When the dust settles at UFC Fight Island 4, two-division champion Amanda Nunes could have the next challenger for her 135-pound title.

Will it be the fast-rising Irene Aldana? The former Invicta FC standout has found her footing in the UFC after a slow start, winning five of her last six fights. In her most recent outing, she needed less than a round to knock out presumptive No. 1 contender Ketlen Vieira and claim her spot. She’d be a fresh opponent for Nunes and one that would bring her own impressive punching power into a meeting with “The Lioness.”

Or will it be the woman meeting Aldana in Saturday’s headliner, perennial contender Holly Holm? Though Holm has already had a shot at Nunes, the former bantamweight champion is never far from another title opportunity. Four of her previous eight bouts have been with a championship on the line. Don’t be surprised if she steals Aldana’s thunder and keeps herself in the mix at 135 pounds.

And then there’s Germaine de Randamie and Julianna Pena, who also compete on Saturday’s main card. De Randamie is a former featherweight champion seeking another fight with Nunes and she feels she exposed some holes in Nunes’ game when they met for the second time in December.

Like Aldana, Pena would be a fresh challenger and she can gain some much-needed career momentum with a win over “The Iron Lady” as she competes for just the second time since January 2017.

In other main card action, heavyweight strikers Yorgan De Castro and Carlos Felipe look to make the most of a co-headlining spot, Kyler Phillips takes on late-notice replacement Cameron Else in a bantamweight bout, and middleweight veteran Dequan Townsend tries to spoil the debut of undefeated Contender Series contract winner Dusko Todorovic.

The best of Holly Holm tends to bring out the worst in her opponents.

Holm has always been one of the most technically sound fighters on the UFC roster, which can lead to highly effective results for her that don’t always make for the most compelling television. It falls upon Irene Aldana to take Holm out of her comfort zone, something few fighters have been able to do. Even looking at Holm’s recent losses, only Amanda Nunes was able to completely overpower her. Others like Cris Cyborg and Germaine de Randamie had to go the full five rounds with the gritty New Mexico native.

Speaking of their resumes, Holm’s level of competition dwarfs Aldana’s and that’s another check in her favor. They have a pair of shared opponents in Bethe Correia (who both finished) and Raquel Pennington. Though Holm scored a methodical win over Pennington, Aldana also impressed against “Rocky” despite losing a close split decision. So there are at least traces of anecdotal evidence that Aldana is on Holm’s level even if she hasn’t worked her way through the same row of contenders yet.

Aldana’s aggressive striking is so fun to watch when she gets going and this outcome will be determined by her ability to deal with what will undoubtedly be some frustrating stretches against Holm. Holm is such a patient fighter, the kind that rarely makes mistakes and is happy to pick you apart for 25 minutes if it means getting the decision at the end. Her clinch work is also outstanding and if she needs to wrestle to stifle Aldana, she’ll do it.

All that said, Aldana’s power will make the difference here. One other thing that Holm’s recent losses have in common is they came against women who can hit like a truck. Aldana fits that profile. What she lacks in volume, she should make up for in flashes of effectiveness that wow the judges enough to get her the nod after five rounds.

The stakes might be low for this heavyweight bout, but Yorgan De Castro and Carlos Felipe have the knockout power to make the most of it. Neither fighter had to have been satisfied with their previous outings that resulted in decision losses, so they should thank the matchmakers that they’ve been given a dance partner willing to stay in the pocket and trade.

In this instance I’m favoring De Castro for the diversity of his striking, though I think Felipe packs a little more pop in his punches. If Felipe comes out on the winning end of one or two gambles, he could find the finish early. That’s easier said than done though as De Castro will light him up if Felipe closes the distance carelessly. As it is, watch for De Castro to chew up Felipe’s legs with kicks before finishing with strikes in the second round.

I’m skeptical that Germaine de Randamie’s takedown deficiencies are as easy to fix as she seems to think. Speaking to the media earlier this week, she blamed herself for standing too upright in her bantamweight title bout with Amanda Nunes, explaining that her eagerness to hunt for a knockout made her easy pickings for Nunes’ takedowns. If all it takes is a few adjustments in her stance to stay off her back, then she should no trouble with Julianna Pena.

Pena’s plan should be to shoot in early and often and break out every single wrestling trick she knows to get de Randamie on the mat. As improved as she is as a striker since her Ultimate Fighter days, she’s nowhere near the level of de Randamie and every second she spends on the feet with The Iron Lady is one in which she is in serious danger.

So spam that takedown button, Pena, because while I’m sure you’d love to show how much your all-around game has evolved, this is not the time to introduce K-1 Julianna. This is for all intents and purposes a striker vs. grappler matchup and if the grappler does what she’s supposed to, the striker should struggle.

Kyler Phillips vs. Cameron Else

This could be a wild one.

Kyler Phillips gets in the cage and he gets busy. The Arizona-based fighter is constantly on the attack, throwing strikes from distance, in close, and even when he’s defending against takedowns. He also has an affinity for *ahem* spinning sh*t and won’t be afraid to unleash some unpredictable techniques against Cameron Else.

Stepping in on a week’s notice shouldn’t be too much of an issue for Else, an Englishman who is no stranger to unorthodox attacks. A member of the Jackson-Wink team, Else has been fighting overmatched competition for some time so Phillips will actually be a significant step up in competition for him.

The good news when it comes to Else is that he’s taken care of business against his unqualified opposition, with all 10 of his wins coming by way of first-round knockout or submission. That’s a finishing instinct you can’t teach. Still, Phillips—despite being four years Else’s junior—is the more seasoned fighter at this stage of their careers and I like him to outpace Else and win on points.

Major experience advantage goes to Dequan Townsend, who racked up almost 30 pro fights before finally getting the call from the UFC. He’s yet to pick up a win inside the octagon and achieving that goal isn’t going to be any easier with a talented prospect like Dusko Todorovic standing in his way.

In Todorovic’s last fight before competing on the Contender Series, he picked up a first-round TKO of Michel Pereira, which means he might already be one of the greatest fighters of all-time. Todorovic is such an intriguing newcomer because he’s been dominating more experienced competition for the last few years. His Contender Series win over Teddy Ash may have been light on action, but he showed that he knows how to stick to a game plan and defuse a dangerous opponent. He’s not just going to sit at range and let Townsend get going with his superior reach. His clinch work is advanced for a 26-year-old and it will be key to him slowing Townsend down.

Townsend can give Todorovic problems in the striking department, but his grappling defense just isn’t where it needs to be to be successful at the UFC level. Outside of a few submission attempts, I don’t expect Townsend to be much of a threat to Todorovic; if anything, Todorovic should come out as the aggressor and take Townsend down. Once there, he can get back to his finishing ways, taking Townsend out via submission or ground-and-pound.