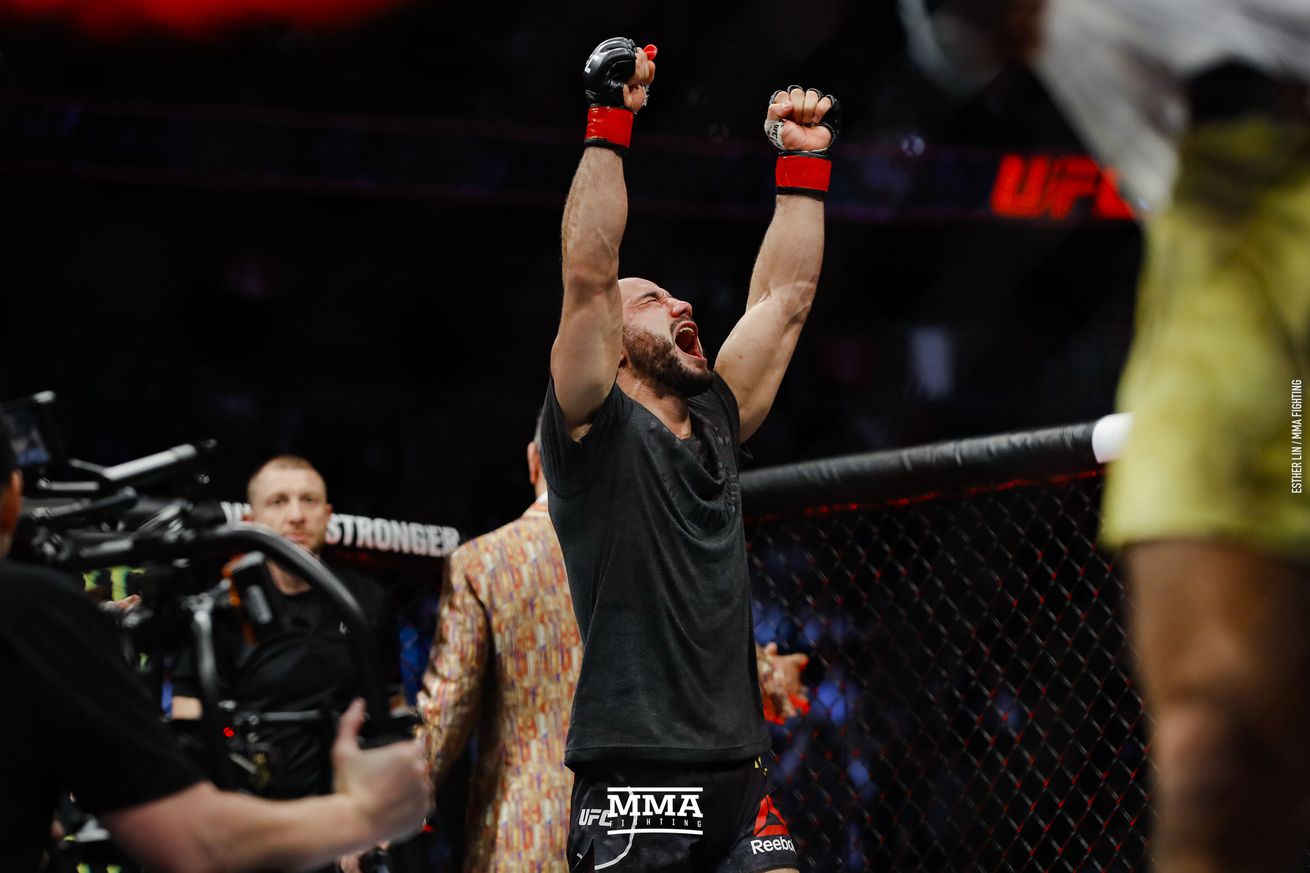 Marlon Moraes has a steep hill to climb in his quest for another shot at the UFC bantamweight championship.

In this case, the immensity of the challenge is quite literal as Moraes takes on the rangy Cory Sandhagen in Saturday’s UFC Fight Island 5 main event. Standing nearly six feet tall, Sandhagen not only brings impressive physical gifts to the cage, but also comparisons to 135-pound great Dominick Cruz that have marked him as a future title contender.

Regardless of Saturday’s outcome, one would imagine that Moraes and Sandhagen will still have to wait behind No. 1 contender Aljamain Sterling for a shot at Petr Yan. Still, crazier things have happened in the UFC and given that a Yan-Sterling matchup is inexplicably yet to be reported, it’s not unreasonable to suggest that an impressive performance could see Moraes or Sandhagen challenging Yan next; completely unfair to Sterling, certainly, but not unreasonable.

The co-headliner features lightweight stalwart Edson Barboza making his second appearance at 145 pounds and it’s getting to the point where one has to wonder when “Junior” will catch a break. Barboza has lost five of his previous six fights, a slump that should be taken with a grain of salt given that some of the names he’s faced recently include Khabib Nurmagomedov, Justin Gaethje, and Kevin Lee.

Add in the fact that Barboza’s past two fights were narrow split decision losses that he arguably won and one can see why the 34-year-old is still significantly favored heading into his fight with Makwan Amirkhani. On the other side of this matchup, “Mr. Finland” could net what would be by far the most notable win of his career if he can upset Barboza.

When: Saturday, Oct. 10. The entire event airs on ESPN+, beginning with a seven-fight preliminary card at 5 p.m. ET, followed by a six-fight main card at 8 p.m. ET.

If this fight goes to the championship rounds, it could be a big night for Cory Sandhagen.

“The Sandman” has an elusive striking style that makes him a nightmare to deal with for 25 minutes. He’ll have to be at the top of his game with Marlon Moraes, one of the bantamweight division’s most dangerous fighters. Sandhagen succumbed to a submission in the first 90 seconds of his most recent fight against Aljamain Sterling and if he’s not careful, it could be another short night for him.

Moraes has such a wicked combination of speed and power. It’s difficult to imagine Sandhagen being able to stay out of his way for five rounds, given how good Moraes is at cutting off angles. He may finish fast, but that doesn’t mean Moraes fights like he’s in a hurry. He’ll take his time figuring out the wiry Sandhagen before opening up as round one comes to a close (assuming it lasts that long).

A fighter never wants to give up rounds, but that may be what Sandhagen has to do to survive Moraes’ opening salvo. This is a winnable fight on the feet and if Sandhagen can do his best Dominick Cruz impression yet, that might be just what is needed to out-point Moraes.

Simply put, Moraes has had issues with finishing his plate lately, so it’s understandable that the oddsmakers like Sandhagen heading into Saturday. I’m not convinced that Moraes, at his best, isn’t either the best or second best fighter in the world at 135 pounds and I expect him to remind everyone of that status against Sandhagen.

At a glance, this is a textbook striker vs. grappler matchup, but there are other dimensions to consider.

Edson Barboza is a fierce fighter capable of dragging opponents into striking duels for 15 minutes as long as he stays focused. He’s let up on the pedal in the past, which has cost him, and it’s something he can’t afford to do against the explosive Makwan Amirkhani. For Amirkhani, the plan has to be to get Barboza down early, wear him down, and score a submission in the first or early in the second.

As exciting as Amirkhani is to watch, he has faded as fights progress and if his cardio isn’t improved and he can’t submit Barboza, this is going to be an increasingly uncomfortable experience for him. Barboza will mercilessly chop away at Amirkhani’s lead leg, making it difficult to shoot later in the fight. He’ll also piece Amirkhani up if Mr. Finland gets too flashy on the feet.

Barboza has always had underrated wrestling and submission defense, which is bad news for Amirkhani. This fight should make it to the third with Barboza pulling away and either winning a convincing decision or finishing late.

In his past two outings, Marcin Tybura has leaned heavily on his wrestling to grind out victories and I’m not sure that’s going to work against Ben Rothwell. “Big Ben” can be taken down, but he can threaten with an active ground game and is more agile on the mat than he gets credit for.

It’s been a while since Tybura has had to let loose with his hands, which is what he’ll have to do here to compete with Rothwell. The Wisconsinite’s standup game isn’t difficult to figure out. He’ll patiently approach Tybura and flick out kicks and jabs while watching out for Tybura’s shots. If Tybura is careless with his entry, Rothwell will gladly attack his neck.

Tybura will want to turn this into a wrestling match and at some point Rothwell is going to find his timing and catch him with a guillotine choke.

Dricus Du Plessis, a former KSW middleweight champion and a two-division champion in South Africa’s Extreme Fighting Championship promotion, is as decorated as a UFC debutant can be. Stylistically, he’s been given an excellent matchup in Markus Perez.

Perez has been inconsistent in five UFC appearances, but he has performed as advertised. He’s a strong grappler who is willing to take chances on the feet and throw unorthodox strikes. His standup is still a work in progress though as his style has yet to yield great results.

The power advantage goes to Du Plessis, a fellow submission specialist who also has fast hands. His bread-and-butter is grappling and there could be some fun scrambles in this one especially with how aggressive Du Plessis can be. He is not one to be content with holding position and if he ties up with Perez, he’s going to initiate as much offense as possible. Cardio will be a key factor for both fighters here.

While I don’t think this will be the blowout that some are predicting, Du Plessis’s freakish strength and nose for the finish should serve him well in his first UFC appearance even if Perez takes him to the scorecards for the first time in his career.

Just 27 years old, it’s easy to see why England’s Tom Aspinall is so highly touted as a prospect in the aging heavyweight division. Despite tipping the scales at around the 250-pound mark, Aspinall shows incredible quickness for his size. He has a well-rounded skill set with an added emphasis on crisp boxing in his most recent fights.

An Alan Baudot win would be a shocker. The MMA Factory fighter is stepping in on a little more than a week’s notice for Seung Woo Choi and was only in Abu Dhabi to corner teammate Ciryl Gane. Baudot normally competes at 205 pounds, so the official weight of 254 pounds that he came in at on Friday probably isn’t ideal for him. He does have legitimate muay Thai skills and won’t be giving up anything in terms of height and reach.

Baudot can get an upset here if he catches Aspinall early, but Aspinall’s strength advantage should make Baudot wary of immediately engaging. There’s also the possibility that Aspinall targets Baudot’s subpar wrestling defense. Should this one go to the ground, Aspinall has the chops to soften Baudot up and pick up a submission.

That’s the best way to describe this matchup with Ilia Topuria, 23, an unbeaten prospect who has already made waves in notable promotions such as Brave Combat Federation, Cage Warriors, and Finland’s CAGE organization. He’s finished all of his fights and is coming off of the first knockout win of his career.

Topuria showed off a right hand bomb in his most recent fight, but he’s a wrestler and submission specialist at heart, the type of opponent that could neutralize Zalal. Add in the fact that Topuria is the one with everything to gain here and you have all the makings of a live dog.

I’m still going to lean towards Zalal because he’s quick to adapt and has a style that will make it difficult for Topuria to get a hold of him. Zalal is light on his feet, accurate, and is comfortable on the ground himself. His game plan should be to sprawl-and-brawl. If this remains a standup battle, it will go to Zalal in a walk.