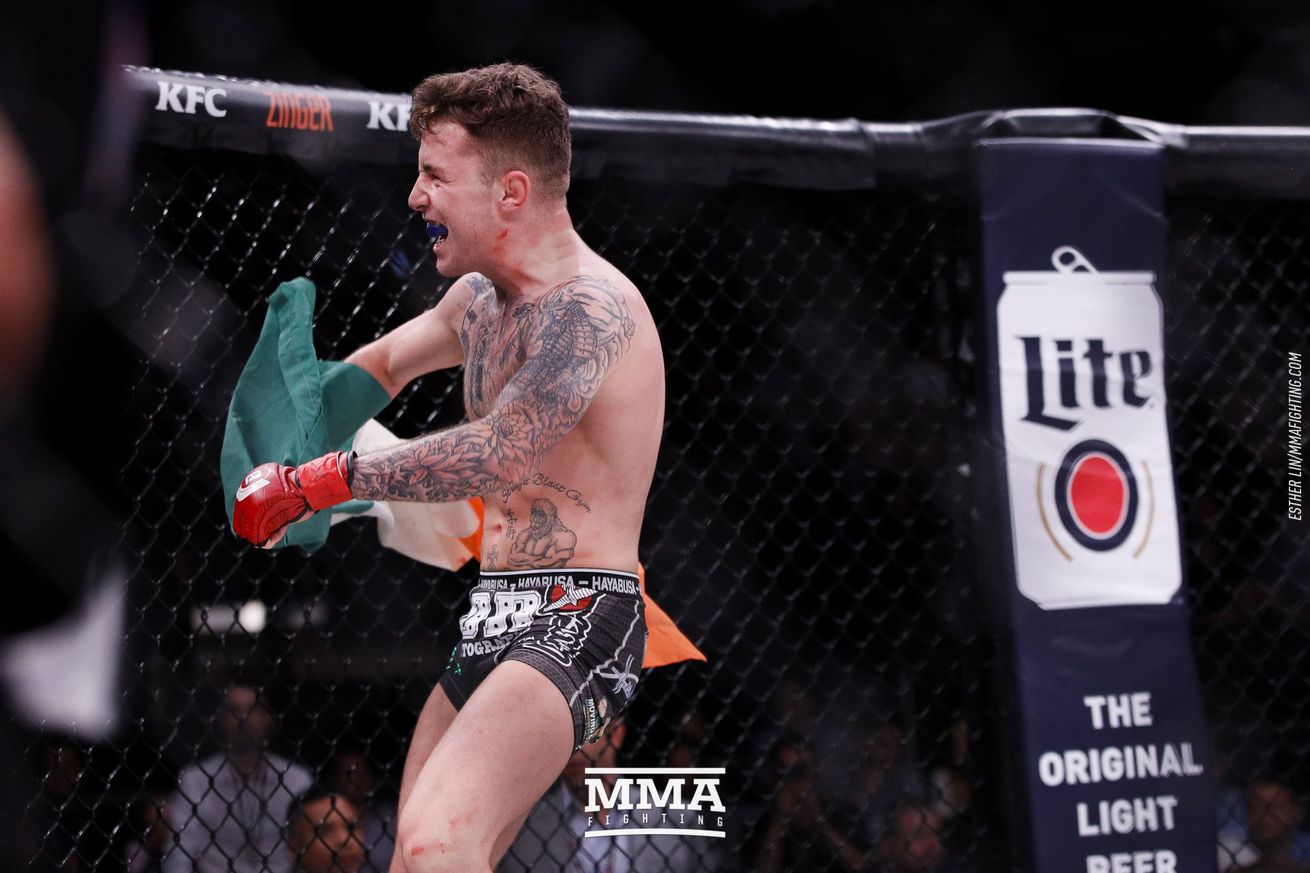 James Gallagher stopped Cal Ellenor inside one round in the main event of Bellator’s show in Milan. | Esther Lin, MMA Fighting

After 13 months and three bout cancellations, James Gallagher and Cal Ellenor finally met inside the Bellator cage in the main event of Saturday’s Bellator Europe 9 in Milan. The result of all that anticipation was an easy win for “The Strabanimal.”

Gallagher and Ellenor traded kicks for a brief moment before the Irishman secured a takedown, immediately taking Ellenor’s back. Gallagher wasted no time, working on rear-naked chokes and neck cranks. He finally locked in the former with 30 seconds left in the clock, forcing Ellenor to tap at the 4:31 mark of the opening frame.

GALLAGHER GETS THE TAP!

⁰ @StrabanimalMMA went to work on the rear-naked choke and after some great hand work secured the submission on Ellenor at the close of round 1️⃣.⁰⁰#BellatorMilan pic.twitter.com/Wq3Q5qTq3i

“I came here the best I’ve ever been,” Gallagher said after the win. “I didn’t talk. For the only time — they say it’s all talk, it’s all talk, I’ve had my mouth shut for months and I still come in and do it. Silence to whole f****** division. Silence.”

Now on a four-fight winning streak and 8-1 under the Bellator banner, Gallagher said he’s “too smart” for his opponents and asked Bellator to “give me anyone, everyone, and a big bag of money and I’ll fight any f****** one of them” next.

In the co-headliner, middleweights Charlie Ward and Andy Manzolo started firing shots right out of the gate, with Ward rocking Manzolo in the first 60 seconds. Manzolo immediately took him down and got his back to work on a rear-naked choke, but couldn’t secure the finish.

Ward decided to talk some trash at his opponent in between rounds, shouting “I hope you’re not getting tired” as Manzolo appeared to throw up in a bucket. Both fighters slowed down in the second stanza, though, with Ward staying on top and working on the ground and pound in the final 10 minutes to secure an unanimous decision victory.

The main card opener delivered five minutes of fun in a 160-pound catchweight contest between Kiefer Crosbie and Charlie Leary.

Crosbie was the first to rock his opponent, forcing Leary to shoot for a single-leg takedown, and he ended up eating several elbows to the temple. Then, Leary got back to his feet and scored the first of three knockdowns in the opening round. Crosbie managed to survive the round, but the doctor called it due to damage he suffered to his left eye.

A sensational first round between Kiefer Crosbie and @Leary8mma!

The doctor, though, waves off the fight at the start of the second. #BellatorMilan

We are LIVE on Channel 5 & Virgin Media Two pic.twitter.com/K4Mx3zTO5F