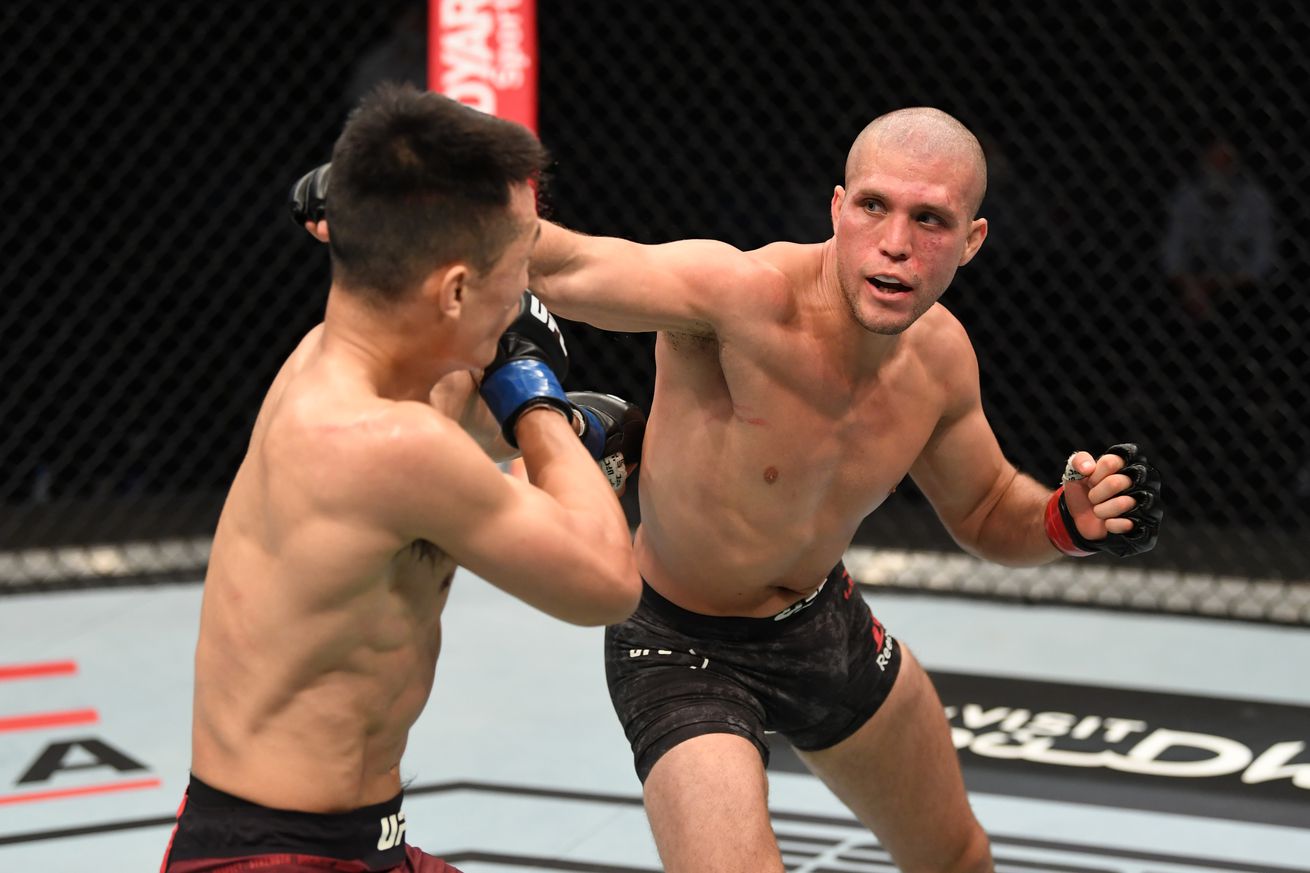 For more on Ortega vs. Korean Zombie, check out the live blog from MMA Fighting’s Mike Heck.

Round 1: The highly anticipated No. 1 contender fight at 145-pounds has finally arrived and Lukasz Bosacki is the third man in the octagon. They meet in the center and Zombie starts throwing hammers. Ortega lands a hard kick to the body as both have shifted to patience very quickly. Leg kick from Zombie, Ortega answers with a clean jab. Leg kick from Ortega checked and then returned by Zombie. Right hand lands on the tail end of a combination by Zombie, who lands another hard leg kick as well. Ortega switches stances and both men are looking for an opening to explode. Final 90 seconds of the opening stanza and Zombie lands a calf kick. Ortega lands a combination, Zombie moved forward and Ortega lands a hook that stuns Zombie. Ortega lands another hard right hand and is beating Zombie to the punch. Left hook from Zombie approaching the final 10 seconds. They trade shots, Ortega just misses a huge right hand at the horn.

MMAFighting scores the round 10-9 for Ortega.

Round 2: Ortega had a very impressive first round on the feet, but does he want to keep playing that game? They meet right in the center of the cage and it’s a patient start for both guys. Leg kick lands from Ortega. Lead elbow attempt from Ortega, Zombie counters with a hard combination. Leg kick from Zombie as Ortega tries to move forward with a jab. Takedown attempt from Ortega thwarted by Zombie. Overland left after a leg touch from Ortega, interesting, yet effective approach. Halfway through the round and Ortega’s lower legs are both bruised near the shins. Zombie with a hard combination, Ortega lands a stinging kick to the body that echoed throughout the Flash Forum. Another low kick lands for Ortega, who then lands a spinning elbow the drops Zombie. Ortega looking to finish, but Zombie gets back to his feet. Ortega takes Zombie down momentarily and almost has him mounted with 10 seconds to go. Ortega ends the round on top as the horn sounds and looks to have stolen it. Wow!

Round 3: As Jim Ross says, business is picking up in Abu Dhabi. Ortega takes the center of the cage and Zombie looks a little more tentative. Ortega circling to his right and Zombie throws a body kick that grazes his opponent’s midsection. Side kick to the knee from Ortega lands, Zombie tries to answer with a leg kick, but his liver is met by Ortega’s foot. Ortega goes to the body of Zombie at the midway point of the round. Left hook by Zombie, counter left right behind it. Zombie with a pair of jabs and Ortega lands a beautiful shot to the body, and a jab behind it. Final minute of the round and Ortega teases a head kick. Right hand from Zombie gets countered by an Ortega leg kick. Single leg attempt from Ortega leads to a left hook and a right hand on Zombie. Another kick and left hand from Ortega to wrap things up and go up three rounds, more than likely.

Round 4: Zombie needs to get something cooking and very quickly. He begins the round by stalking Ortega down, trying to get towards the fence. Ortega does a nice job with his footwork to get out of that predicament and starts to land his jab once again. Left hook and a body kick from Ortega. Another leg kick eaten by Zombie and Ortega looking for a takedown. Before he gets him down, he lands a left elbow that cuts open Zombie before he gets in to the mat. Zombie gets to his feet and the referee calls for the doctor, who clears him to continue. A pair of leg kicks land from Ortega as action resumes. Both men trade punches—advantage Ortega. Final 90 seconds and Ortega cracks Zombie with a right. Left jab lands for Zombie with just over 30 seconds to go in the round. Zombie looks for a body kick, blocked by Ortega who changes levels and tries to get a takedown. Spinning elbow from Ortega misses as the horn sounds.

Round 5: Zombie has five minutes to put Ortega away. They touch gloves and Zombie is moving forward. Ortega lands a leg kick but and a hard jab. Zombie moves forward with a right hand that grazes Ortega. Leg kick again from Ortega. Zombie throws a right hand, Ortega answers with a clean, effective combination. Head snapping jab from Ortega and Zombie just has no answers in any aspect of this fight. Body kick from Zombie blocked and Ortega lands a right hand. A trio of body kicks from Ortega land at the halfway point of this final round. Ortega’s footwork has gotten even better in these last couple of minutes. Zombie lands a left hand but Ortega isn’t even budging. Short elbow connects by Ortega. Final 60 seconds for Zombie to land a Hail Mary. A bloody Zombie trying to close the distance and Ortega keeps peppering him with jabs and leg kicks. Stiff right jab from Ortega lands. Final five seconds and Ortega lands another jab as the horn sounds. Should be a clean sweep for Ortega.