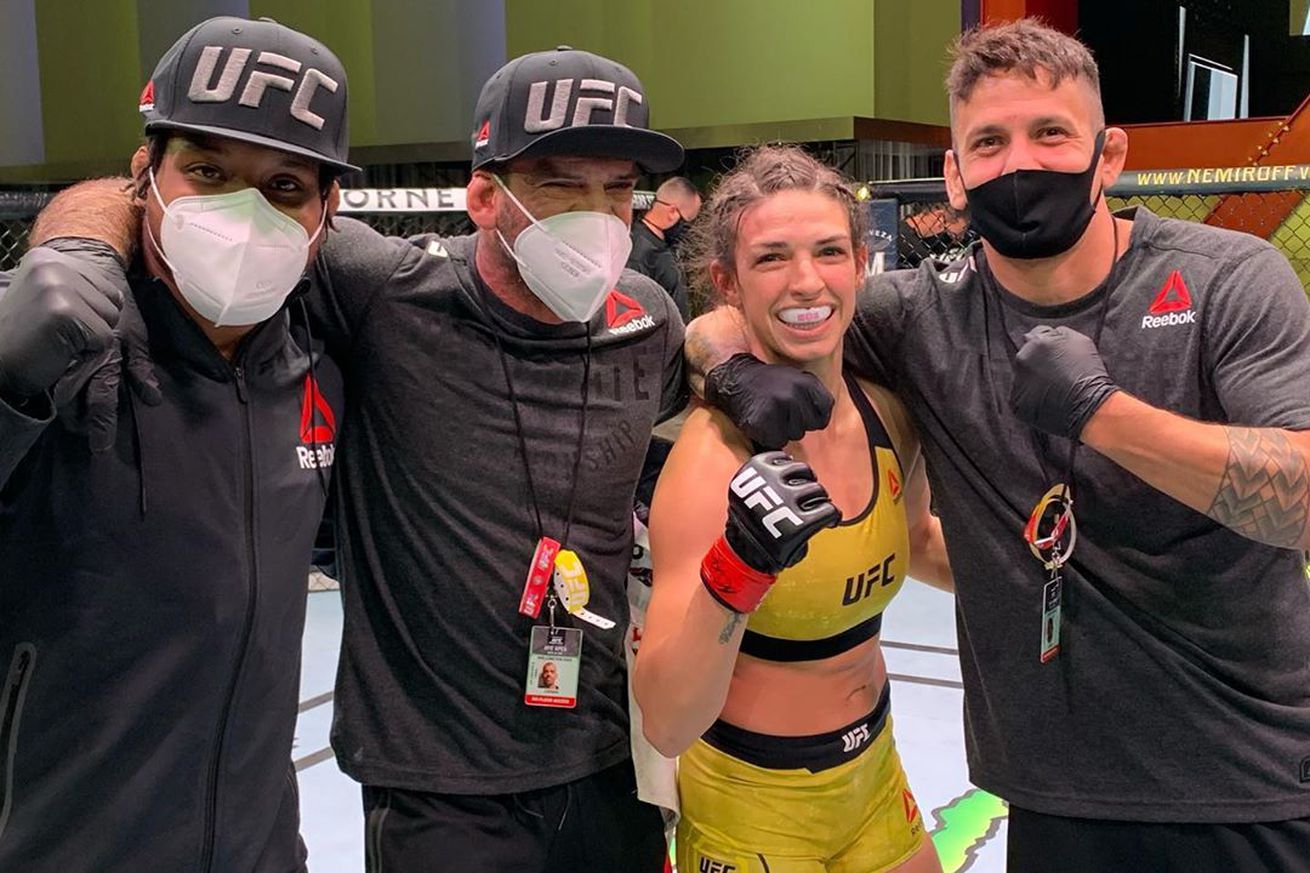 A physical altercation at the gym left Juan Gomez more concerned about the damage to his reputation than any actual injury.

The striking coach recently found himself getting into a fight with surfer Wesley Santos, better known in the MMA community as the husband of UFC strawweight Mackenzie Dern. As Dern recalled on a recent episode of What the Heck, Gomez and Santos clashed after Gomez called her and Santos to the Black House gym in Los Angeles to discuss what she believed to be an issue related to monetary compensation from her last fight (she later clarified that she wasn’t exactly sure what it was that Gomez was upset about).

Alongside Dern’s father Wellington “Megaton” Dias and wrestling coach Bubba Jenkins, Gomez was one of the cornermen for Dern’s first-round submission win over Hannah Cifers at UFC on ESPN 9 this past May. MMA Fighting reached out to Gomez prior to the publication of Dern’s account and spoke to him Thursday following the circulation of the story.

Gomez did not divulge exactly what caused the rift, but he wanted to express that he still has “love” and “respect” for Dern despite the conflict between him and her husband.

“It hurts me when I saw this interview from her speaking about the bonus, which is something that was never my priority,” Gomez said. “Never. It’s something that people need to know the truth. What happened between me and her husband was nothing about money or bonus. It was numerous factors that built up, that [led to] what happened between me and her husband, which was something not big. It was something not a big deal at all, I thought we flipped the page. A couple of days ago, I approached her friend, her wrestling coach, that I wanted to say sorry to her. Because in the end I still like her. In the end, I see our friendship. I want the best for her. I wish her the best in this fight.

“But when she speaks about the bonus, it’s something that makes me sad. And she knows better than anybody that this was never my priority. I still respect her because I’m not going to go into details that caused the fight to happen. It was numerous factors. If I was a bad person I could come to you right now and speak all the details which make that fight happen, but I’m not going to because I respect her. Even when she speaks something that is not true about the bonus, I still respect her, her privacy, and everything that happened between us.”

Pressed for an explanation as to why he and Santos fought, Gomez would only say, “She knows. She knows.”

Gomez did acknowledge that it was existing issues with Santos, not Dern, that led to the two men butting heads. He says that Dern prepared for several fights with the Black House team and it wasn’t until Santos began to take on more responsibility (Gomez mentioned organizing camps and handling payments as two examples) that tensions arose. Though he doesn’t consider Santos to be “a bad person,” he does feel that Santos lacks knowledge when it comes to the MMA world.

“My problem was with him,” Gomez said. “Was never with her. I think maybe because sometimes you’ve got to know how to separate your career from family. When you’re involved in MMA and you have professionals helping you, all those professionals that are helping you, they must know and have experience and MMA. When you don’t have that kind of experience, wrong things are going to happen.

“It’s a very delicate career. From the manager to the agent to the strength and conditioning to the nutritionist to the head coach, all of them, they need to have experience with MMA. Because if you don’t have it, something’s gonna happen.”

As for the fight itself, Dern appeared to downplay it in her telling of the encounter, joking that it was almost like a sparring session as her father gave Santos tips while he and Gomez squared off. Gomez agrees that it wasn’t anything serious and he’s grateful that there were students and others at the gym to separate them before the situation escalated.

He denies that he invited Gomez to the gym with the intention of fighting him.

“It was nothing much,” Gomez said. “It was something I was not even expecting, something that wasn’t even premeditated. Something that I never thought for a second was gonna happen. But the emotions went too hard from both sides. Once again, if you have no experience with this environment, you can’t argue that much. You can’t speak up with people that have been doing that their whole lives. The emotions went through the roof and it ended up what happened.

“People that was there and saw what happened, they realized it was minor. Nobody got hurt. It was almost like a hug, push, hug, push, and that was it.”

As a consequence of the altercation, Gomez says he and Dern were actually both asked to leave the team, which put some of his students in an awkward position. Dern described the parting of ways from Black House as amicable and Gomez told MMA Fighting that he’s currently in talks to assume a new position at a well-known gym.

While Gomez takes his share of the blame for what happened, specifically citing his passion as an attribute that can rub others the wrong way, he also thinks there are two sides to every story and that both should take responsibility. He points to Dern’s history of changing fight camps (Dern is currently with her third team since making her pro MMA debut in 2016) as evidence that there’s always more than meets the eye when it comes to his former student.

“She can say whatever she wants, but she cannot lie for herself,” Gomez said. “She knows that money was never an issue, money was never a problem. All the things that made you a champ, a mindset of a champ, that was the problem.

“People need to realize, which was Mackenzie’s first training camp? Where was it? What happened over there? After that, where she went? And what happened the second training camp? So what happened over there? It’s kind of like, if there is a problem, yes it is on both sides. I’m not gonna say that it 100 percent was my fault, but I’m not gonna say that Mackenzie and Wesley they are 100 percent right. I am wrong and they are wrong too. But I don’t think it’s fair we go to the public in interviews speaking lies, things that are not true.”

Gomez, who has worked with Dern for the past five years and helped bring Dern over to Black House, wants Dern to succeed and he’s hoping that she puts her striking skills to good use when she fights Randa Markos this Saturday at UFC Vegas 11.

“I am wishing all the best for her,” Gomez said. “I hope that she goes there and knocks this girl out.”

But in the immediate aftermath, Gomez is still stinging, more so from the personal cost of his disagreement with Santos than anything.

“I’m not seeing that I lost Mackenzie Dern as a fighter, I lost my friend. That girl that outside the mat we have a great relationship. Great one, amazing memories. … She’s a great girl, a great human being. But as a professional athlete, she has a lot to learn.”