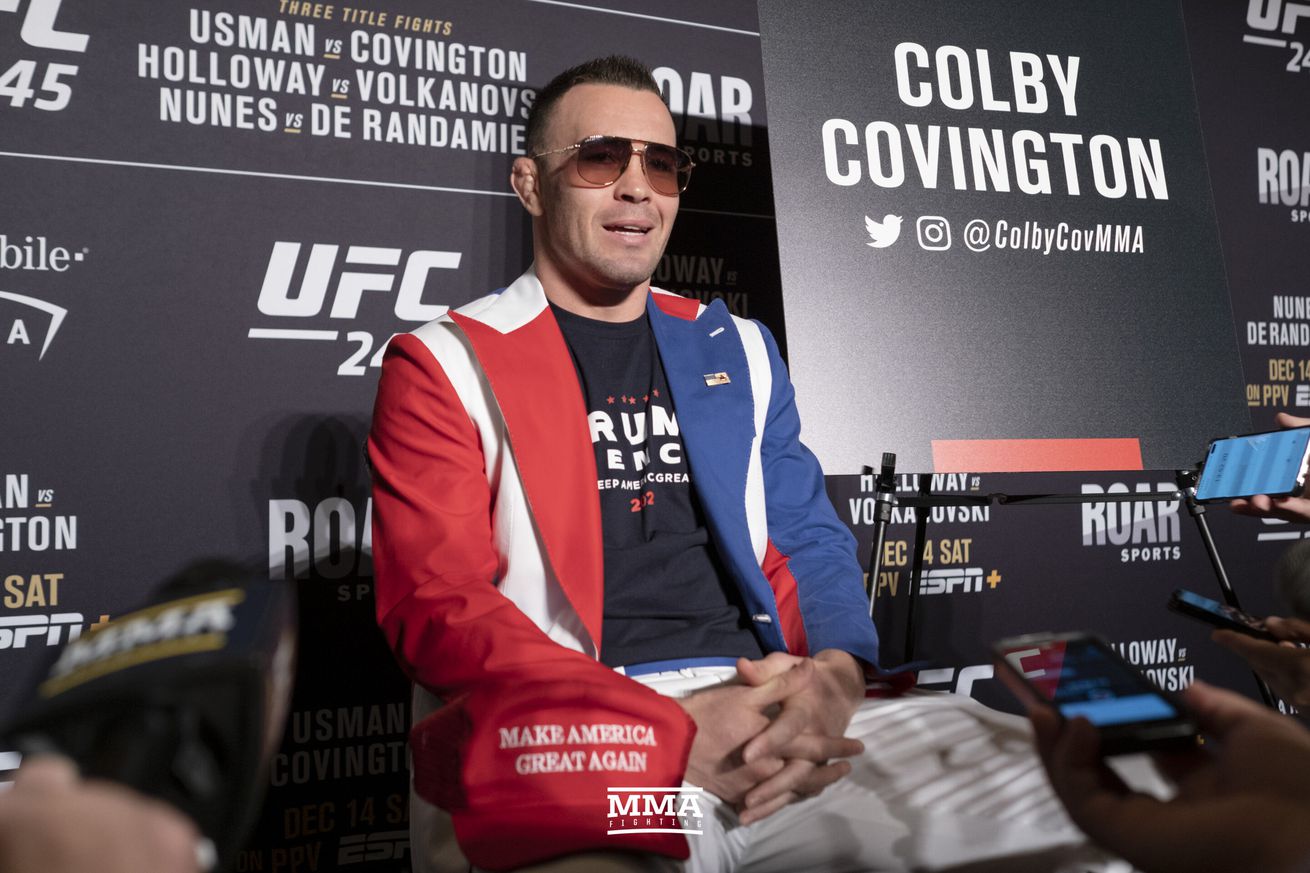 After facing backlash for racially-charged language following a finish of Tyron Woodley, Covington attacked the reporting on his behavior and denied wrongdoing.

The interview marked the first time Covington answered directly to charges of racism after a brief statement on his Instagram page where he wrote he speaks “for the silent majority” and he’ll “never back down.”

The controversy was sparked after Covington’s dominant win at UFC Vegas 11. During an interview on the post-fight show, he engaged in a war of words with reigning welterweight champion Kamaru Usman. After accepting a call from President Donald Trump early in the same interview, Covington made reference to Usman’s native country of Nigeria as the two traded insults.

Speaking with the media backstage, Covington was then asked about a derogatory post he made on social media where he blasted Woodley for wearing a Black Lives Matter t-shirt and responding to every question with some variation of ‘Black Lives Matter’ during a media day.

“These aren’t people that are hardworking Americans, blue-collar Americans. These are bad people. They’re criminals.”

During his appearance on Submission Radio, Covington took issue with how some members of the media went about getting reactions from fighters on the roster – and more specifically, fighters not from the U.S.

In fact, several of the fighters who commented about Covington were asked for their reaction to his comments, and the opinions of Adesanya and others’ were not centered around American politics, but whether his comments directed at Usman were racist. On that, several agreed they were.

“Let’s be real first and foremost, it wasn’t unfortunate, it was flat out racist what Colby was saying,” bantamweight Sijara Eubanks said. “It was racist, it was disgusting and quite frankly disappointing. But at the same time, the one thing I do appreciate is the UFC lets whoever say whatever. They have never muzzled us as fighters. If you want to talk, don’t want to talk. If you want to be political, you don’t want to be political. I have to appreciate that the company lets us say what we want.”

MMA Fighting has reached out to Covington to discuss the situation, but he has declined an interview.

Covington went on to praise White and the promotion for allowing him to speak his mind and exercise his right to free speech.

“The backlash was not warranted,” Covington stated. “I gotta say big respect to Dana White for not bowing to the woke mob. Dana White is the only commissioner that doesn’t try and force an agenda down your throat.

“Like, Basketball, NFL, they’re trying to force a one-sided agenda down your throat, the woke mob. They want to force their politics down your throat and you have to accept it, and if you don’t, we’re not gonna pay you. Dana White is not like that. He’s not trying to limit my free speech. This is America. We have freedoms in America. He’s not telling me what I should and shouldn’t do, and he’s okay with which way I wanna go.

“That’s what I love about Dana White and the UFC as a whole, because they don’t limit their fighters’ freedom of speech and they don’t take away our rights. They let us be who we want to be.”