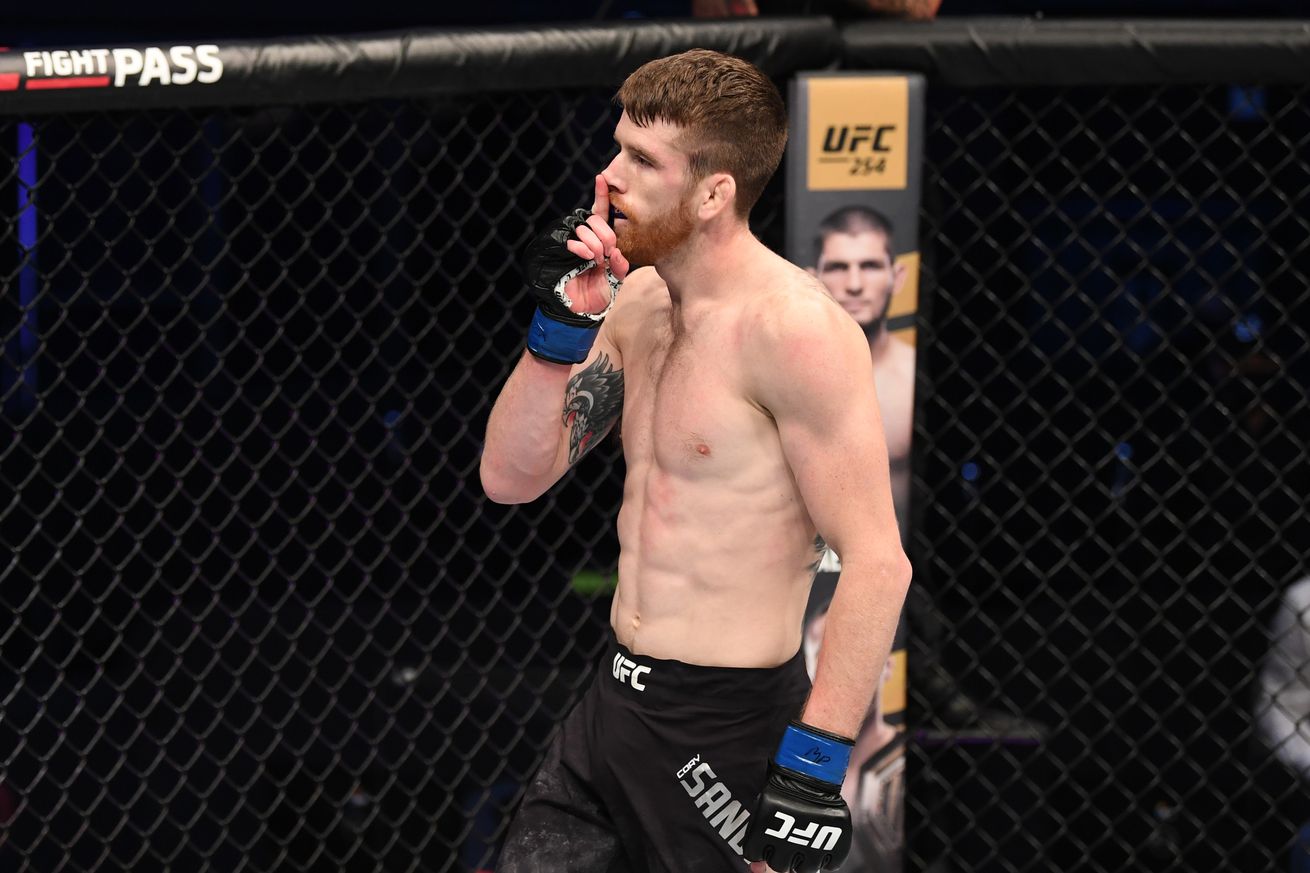 Following a second-round finish over No. 1-ranked bantamweight contender Marlon Moraes in the UFC Fight Island 5 main event, Cory Sandhagen isn’t asking for a title shot. But he certainly wouldn’t turn one down.

After falling to Aljamain Sterling back in June, Sandhagen returned with a statement performance on Saturday night when he unleashed a spinning heel kick that blasted Moraes on the top of his head, leading to a TKO just a few seconds later.

Sandhagen is now 6-1 in the UFC with his lone loss coming to Sterling, who appears to be next in line for a shot at current champion Petr Yan. The only problem is, Sterling hasn’t yet signed a contract to face Yan.

As much as Sandhagen defers to Sterling as the most deserving person for a title shot, if the UFC comes calling, he’s absolutely going to answer.

“I would feel really bad if they did me and Yan and did that to Sterling,” Sandhagen said during the post-fight press conference. “That said, it’s a dog-eat-dog sport, so if they give me that shot, I’m taking that shot. But I think it should be Sterling and Yan.”

Even if he’s not actually offered the title shot, Sandhagen is ready to take the opportunity just in case either Yan or Sterling are unable to compete. A fight against the champ would give him the chance to become champion, and a rematch with Sterling would afford him the opportunity to exact revenge for his only UFC loss.

“I’m definitely going to do that of course now, because I think that I’m probably the No. 1 guy if one of those guys gets hurt.”

If Yan vs. Sterling is finalized, Sandhagen also has his sights set on two more potential opponents in case he doesn’t get the title fight.

Immediately after his win, Sandhagen mentioned former bantamweight champion T.J. Dillashaw, who will be eligible to compete again in January following the conclusion of his two-year doping suspension, as well as former lightweight champ Frankie Edgar, who made a successful debut at 135 pounds in August.

“Whichever one’s going to get me closer,” Sandhagen replied when asked if he had a preference between Dillashaw and Edgar. “I don’t really know how the mind of the UFC matchmakers works 100 percent. I just know win fights, get good finishes and they’ll give you good fights.

“It makes no difference to me. I only said those two names, because they’re the only two in my head that have an argument [for a title shot] and so just one of those two.”

Sandhagen actually has history with Dillashaw after they previously trained together in Colorado. But if that’s the fight the UFC offers, he’s more than ready to accept.

“Me and him used to be training partners, but it was a while ago now,” Sandhagen explained. “I’m in a much different spot.

“We both can’t be champion. It’s a dog-eat-dog sport. Whatever I’ve got to do to get to the top and win the belt, that’s what I’m going to do.”