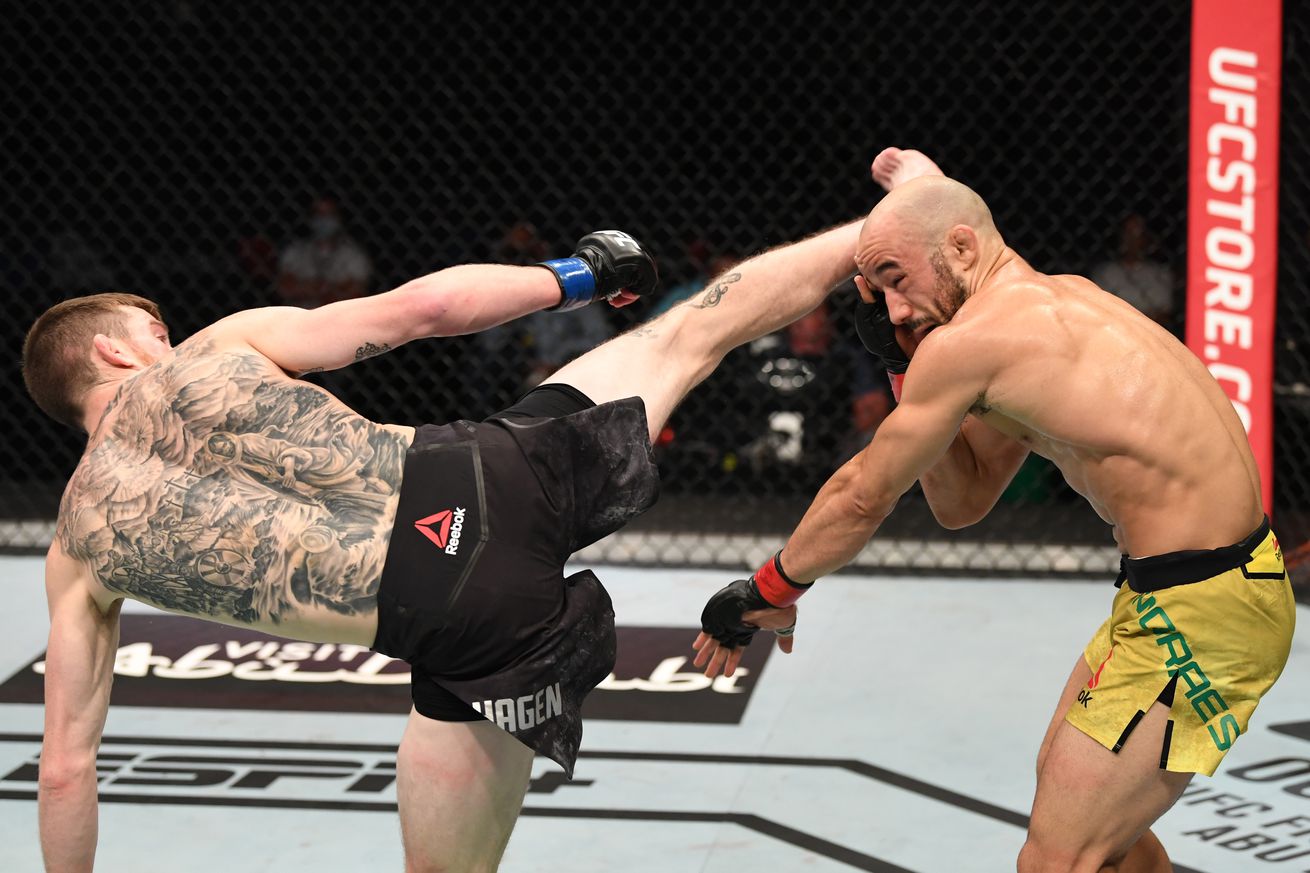 Cory Sandhagen made quite the impression in his first UFC main event.

Coming off a devastating loss in his last appearance in June, the top-five ranked bantamweight jumped at the opportunity to face former title contender Marlon Moraes at UFC Fight Island 5 and he certainly made the most of the opportunity.

Following a strong opening round, Sandhagen uncorked a devastating spinning heel kick that bounced off Moraes’ head and sent him crashing to the canvas. Sandhagen followed with a few more punches but Moraes was obviously dazed and confused as the referee rushed into to stop the fight.

The official stoppage came at 1:03 into the second round.

“That’s putting in that hard work during that quarantine,” Sandhagen said about his spectacular knockout. “I added that into my game during a weird time. Always working. Hard work pays off.”

It was a match of power against volume in the early going with Moraes looking for a knockout with every single shot he threw while Sandhagen mixed together a variety of strikes as he looked to chip away at the Brazilian. While Moraes was constantly seeking an overhand right that always seemed to be just an inch or two away from landing, Sandhagen was countering with leg kicks, shots the body and then coming back up top to the head.

The diverse selection of strikes from Sandhagen forced Moraes to continue guessing at what was coming next, which seemingly set up the finish.

After cracking Moraes with a shot to the face, Sandhagen shouted that his opponent suffered a broken orbital bone. According to Sandhagen, he recognized the injury right away, which is why he called it out during the fight.

“I seen that it was broken and just to mess with him a little bit, I said something. I think it got in his head a little,” Sandhagen said.

Following that exchange, Sandhagen unleashed his fight finishing kick that floored Moraes and helped him earn the TKO victory. In a night filled with spectacular finishes, Sandhagen did his best to place an exclamation point on the card with his knockout in the main event.

Afterwards, Sandhagen turned his attention to a pair of former UFC champions as he seeks to continue his climb towards title contention.

“The only other guys that have an argument [for a title shot] is TJ [Dillashaw] when he gets back in January and Frankie [Edgar],” Sandhagen said. “All the respect to both of those guys but I want that belt.

“I want the belt, those are the only two guys ahead of me and then I want the winner of [Petr] Yan and [Aljamain] Sterling.”