UNCASVILLE, Conn. – Douglas Lima is counting on his heavy hands to still be effective when fighting up from his natural weight class against Gegard Mousasi on Thursday at Bellator 250.

Lima (32-7 MMA, 14-3 BMMA), the reigning Bellator welterweight champion, goes for a second belt when he meets Mousasi (46-7-2 MMA, 4-1 BMMA) for the vacant middleweight title in the event headliner, which takes place at Mohegan Sun and airs on CBS Sports Network following prelims on MMA Junkie.

There’s no doubt Lima is the most credentialed 170-pound fighter in Bellator history. His nine knockouts in Bellator competition are tied for most, and his striking power has been a constant game changer. It’s a wonder how that will carry over against bigger men, but it’s not something Lima is concerned about.

“I’ll definitely (look) for the finish, but I know how durable he is,” Lima told MMA Junkie on Tuesday. “We’re prepared for five rounds. If we’re not able to get the finish, we’ve got to be able to go five rounds. It’s do-able, for sure. Of course, he hasn’t been finished a lot, but a jaw is a jaw. It doesn’t matter if you’re a bear or a lion; you’re gonna go down. I believe in my power. It’s little gloves. One thing connects good, (and) that’s it. Fight is over. It’s not impossible, and I believe in my power, that I can put him away. Just got to respect how durable he is and who he’s been there with in the cage.”

Lima said he didn’t spent much of camp stressing about particulars such as size and weight. He’s a massive welterweight as it is. Lima said he only made a few adjustments for this fight,but didn’t go overboard since a drop back down is in his future.

“I didn’t have to suffer so much with a crazy weight cut,” Lima said. “So far, so good. I feel like my strength is here 100 percent. I trained with bigger guys for this camp, did a little more strength and conditioning. I did everything that I could for this camp to get my body healthy, not gaining too much weight. I don’t want my body to feel weird.”

Douglas Lima: Win over Gegard Mousasi will erase any doubt that I belong on pound-for-pound list

Lima and Mousasi were originally scheduled to fight in May, but the coronavirus pandemic delayed the matchup until this week. The Brazilian said he’s been focusing on Mousasi throughout the year, knowing this matchup would come eventually.

Mousasi is a former Bellator middleweight champ and has been a light heavyweight champ under the now-defunct Strikeforce banner, as well. “The Dreamcatcher” has an incredible resume, and he will be looking to add Lima’s name at Bellator 250. Lima, however, said it’s his job to stop that.

“I’ve got to be on top of my game, for sure,” Lima said. “He’s a guy that’s good everywhere. He’s a big guy. He’s a good striker. He wrestles pretty good, and he’s also really good when he gets on top (on the ground). I have to be ready for anything. … Everything that I could’ve done, I did in this year that I’ve been preparing for him. I just have to be on top of my game. Whatever he does, I’ve just got to do it better. I know I hit hard; he hits hard, as well. I’ll be looking for the finish. It doesn’t matter who it is, how big they are. There’s always a fighting chance. And I feel really good about this matchup.”

If Lima is able to emerge victorious, he would join Ryan Bader and Patricio Freire as the only fighters in Bellator history with simultaneous title reigns in two divisions. Lima said he intends on defending both belts, and if he wins, it would be a dream scenario to roll into 2021 with a plan to fight four times.

“It would do wonders (for my legacy),” Lima said. “For me right now, this is the biggest fight. I want to fight for legacy, and this would be the one that really puts me up there even more. I want (to be on the) pound-for-pound list, and I think a win over Mousasi definitely would put me up there.” 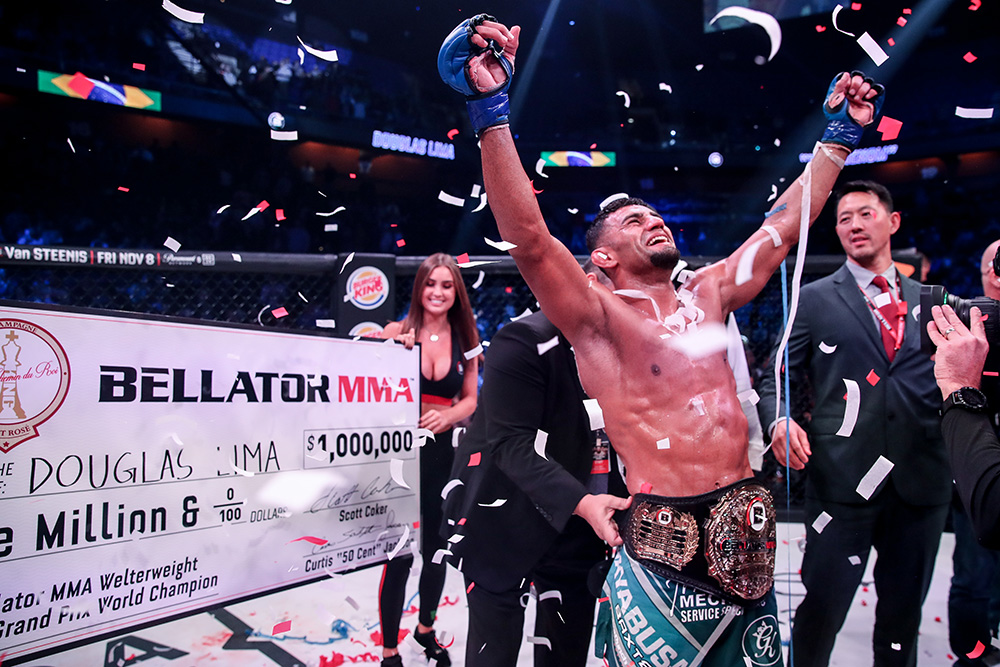