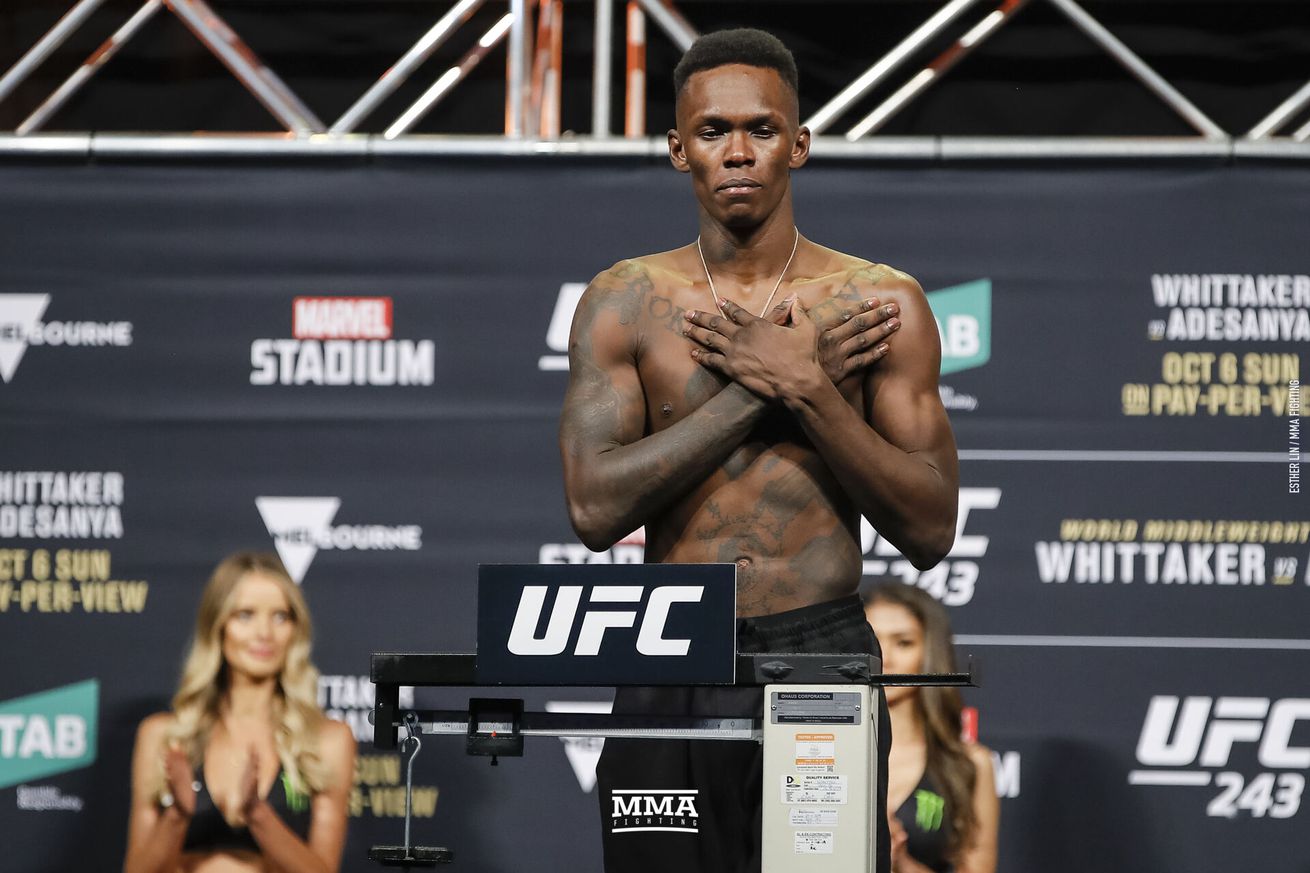 Not only did Bareman’s City Kickboxing fighter Shane Young see a late opponent change at UFC 253, Young also had to deal with opponent Ludovit Klein missing the featherweight limit by four pounds. It’s worth noting Klein stepped in as a replacement for Nate Landwehr, who tested positive for COVID-19, on one week’s notice. But that was of little comfort to Young when Klein knocked him out less than 90 seconds into the first round.

“I told Dana, 30 percent’s not enough [for missing weight],” Adesanya said. “F*ck that, some of these guys are gangsters, they’re making money outside the UFC. Thirty percent ain’t sh*t to them, so they’ll give up that to not make the weight and have 90 minutes to keep on making the weight. And they’re just ‘f*ck it’ drinking their water and whatnot.

“Thirty percent’s not enough, make it 90 percent and that way I guarantee you they will spend every of those seconds and that 90 minutes trying to make the weight and not just b*tch out.”

Bareman spoke about the matter on a recent episode of Submission Radio and he wholeheartedly agreed with Adesanya’s statement.

“We need to do something about it,” Bareman said (transcription via Submission Radio’s Denis Shkuratov). “What’s going on is criminal. For me, it’s just as bad as taking steroids. It’s cheating. It’s cheating. More to the point is, there were two guys that missed weight during that fight night. There’s the Chechen guy (Zubaira Tukhugov, who also came in four-pounds heavy for a featherweight fight with Hakeem Dawodu) and there was Shane’s opponent. These two guys didn’t even try to make weight. They didn’t even try to make weight.

“They purposely chose to come in overweight significantly, take the fine, and have a massive advantage going into the fight. And it just rips the guts out of me because, man, I’m a good loser. If I lose a fight, then we lose. Well done, shake your hands. But if you cheat, I’m not as good a loser as I want to be. And this piece of work, wherever he’s from, gets his first fight in the UFC, gets this opportunity and misses weight.”

One reason Bareman doesn’t have much sympathy for Klein failing to make weight on short notice is that Young made his UFC debut under similar circumstances. Signing on to fight future UFC featherweight champion Alexander Volkanovski, Young was actually the third option after originally scheduled opponent Jeremy Kennedy and first replacement Humberto Bandenay both withdrew. On one week’s notice, Young was able to hit the agreed-upon catchweight of 150 pounds.

What upsets Bareman is that he believes these misses are happening as a matter of intent, not circumstance. He’d also like to see the fighters face more than just a monetary penalty.

“[Klein] missed weight, he had his opportunity, he cheated,” Bareman said. “What’s more, he did it on purpose. Anybody who knows anything about fighting and when they’re looking at a guy weighing in, you know how much effort they’ve put in. This guy cheated. He’s lost his opportunity to be in the UFC, as far as I’m concerned. Like, he lost it. He intentionally missed weight, so he should no longer be in the UFC. The other Chechen guy, he intentionally came in heavier.

“What Israel is going on about, is 30 percent is nothing. Like, it’s not enough incentive. You’ve got to take more money. But you don’t necessarily need to take more money. A lot of these guys don’t care about the money. OK, you have to penalize them in terms of the fight. The result of the fight has to be penalized. Maybe start, you get an automatic 10-9 for the first round. I don’t know what they’re gonna do, but guys are cheating and getting away with it, and something has to be done.”

Bareman scoffs at the suggestion that fighters upset with their opponents missing weight should just not accept the fight. He added the option might be more palatable if the fighter who successfully made weight received their show and win money, which is currently not the case. Otherwise, there’s far more incentive for a fighter to accept a catchweight as opposed to walking away.

“I honestly don’t know the answer, but yeah, that whole thing, it can come across as me being a bit of sore loser, but I’m allowed to be, [and] the guy cheated,” Bareman said. “I’m allowed to be a sore loser when a guy cheats. If the guy made weight and didn’t cheat, then that’s fine. Then shake hands, well done, you’re a better fighter tonight. But that didn’t happen. And then people are gonna argue and say, ‘but he took the fight.’ He has to take the damn fight, man! The guy hasn’t fought for 18 months, had no income. The guy has to feed his family. He’s just had a young kid. We have to take the fight. He could have come in 30 kilos [approx. 66 pounds] overweight; we would have still had to take the fight.”

“I’m not gonna lie, I’ve had a couple of guys miss weight. And one of those guys – not in the UFC – jumped in their fight and won by knockout. He knocked the other guy out. My guy missed weight. I can show a video of this, my guy tried to actually celebrate that win. You can see him, he goes to celebrate, and I yell at him with a lot of profanity – I say, ‘You get out of the cage right now, you do not deserve to celebrate that win, that’s a loss as far as we’re concerned.’ Because my guy cheated. So, you can’t say I’ve got double standards. And it just made me livid to see this guy running around the cage like he achieved something, like, the way he was carrying on. He came to shake my hand right at the end, and luckily the ref pulled him away, cause I can’t shake a guy’s hand like that. I don’t know why he’s in the UFC.”

Check out the rest of Bareman’s interview with Submission Radio below: