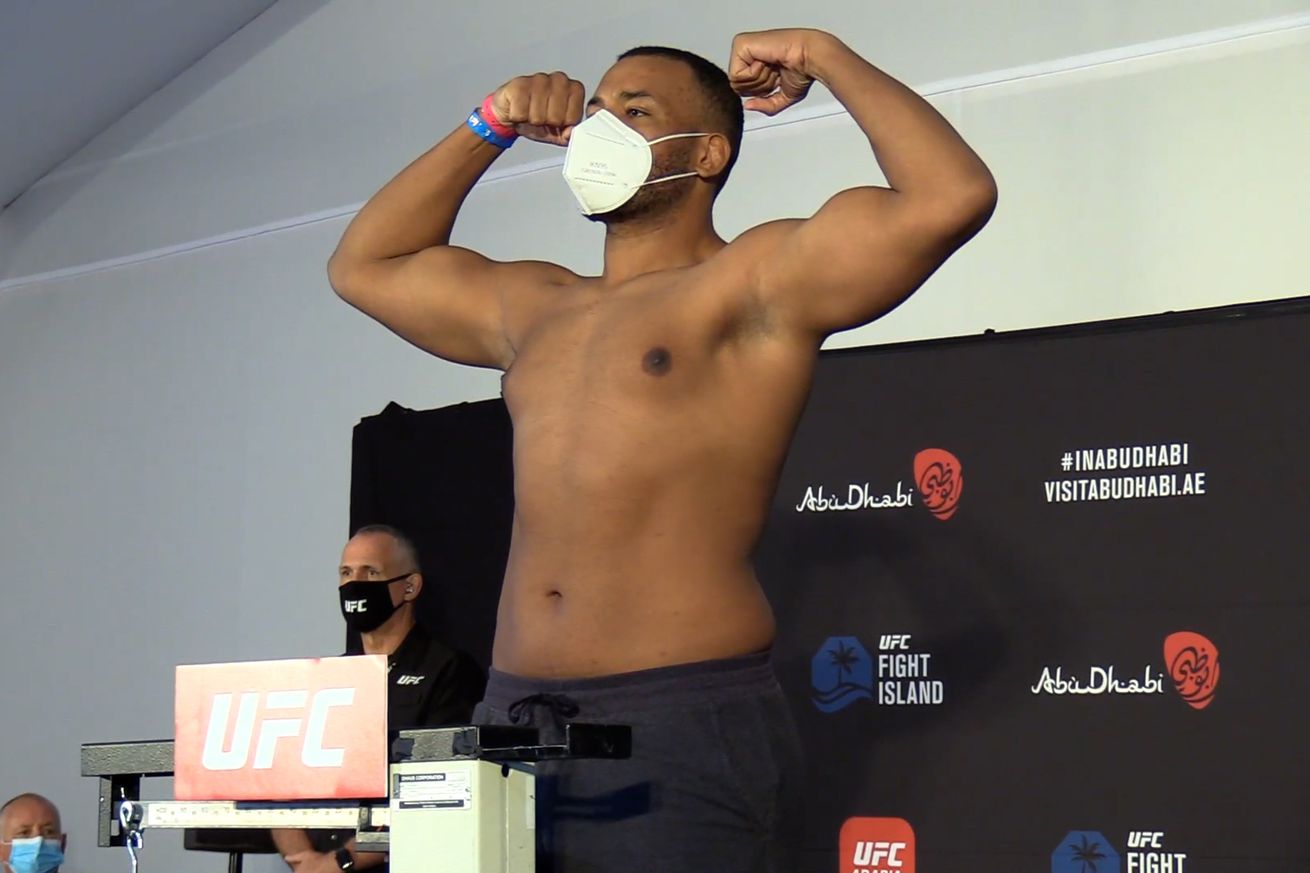 Rodrigo Nascimento has yet to go past the second round as a professional MMA fighter. | Jose Youngs, MMA Fighting

Aleksei Oleinik is the only top-ranked UFC heavyweight who’s earned the majority of his wins submission, but Rodrigo Nascimento is climbing the ladder to one day swim with the sharks, proud to be a dissenting voice in a sea of heavy hitters.

Nascimento, who meets Chris Daukaus on Saturday night at UFC Fight Island 5, remembers an unforgettable experience in Abu Dhabi before his second octagon appearance, training with Antonio Rodrigo Nogueira, one of the best heavyweight grapplers in MMA history, days before the contest.

Nascimento, who’s tapped six of the eight foes he’s faced in his unbeaten career, was inspired by the legendary “Minotauro” after rolling for a few minutes on the mat. He wonders why there aren’t as many heavyweights relying on grappling techniques to secure wins in the highest level of the game.

“I believe most heavyweights believe 100 percent in their power, so they leave the jiu-jitsu and wrestling technique aside a little bit,” Nascimento said in an interview with MMA Fighting. “The biggest proof of that is Francis Ngannou’s fight with Stipe Miocic, in which Miocic threw Ngannou down in every round and got him tired. Some say you can’t stop power, but I think you can. You can beat any striker if you’re smart and have good jiu-jitsu and wrestling.

“I have (good) striking and I trust it, but I think there are easier ways to win fights. I believe heavyweights don’t use jiu-jitsu because they think striking is the fastest and easiest way (to win).”

Daukaus has only been tapped once in MMA, a keylock loss to Shawn Teed in his fourth professional bout five years ago. A black belt in jiu-jitsu, the 31-year-old talent has yet to finish an opponent using the gentle art, instead using his fists, knees and legs to secure eight of his nine MMA wins.

“Every fight requires a different game plan,” Nascimento said. “For this fight, I believe I’ll find the way as the fight goes, but I’m ready to go three rounds, I’m ready to knock him out or submit him. It’s hard to say how I’m going to win beforehand, we have to be ready for any situation — and I will find the way.”

A weight class once dominated by athletes over 30, the UFC heavyweight division now has five of its 15 best heavyweights under that age. For Nascimento, who turns 30 in late 2022, “there’s a new Era of heavyweights coming.”

“Ze Colmeia” hopes to earn a spot among the best “after two more wins,” and aims to get a date with Chase Sherman after Saturday’s show in Abu Dhabi. Nascimento says he has asked for Sherman and been denied “because I’m a dangerous unknown fighter, but there’s no reason why he wouldn’t fight me if I win this one.”

“I’m taking one step at a time and my focus is on (Daukaus), I’m not underestimating him, but (Sherman) is coming off four wins and I’d like to fight him,” Nascimento said. “I’ve asked for him once and he turned it down — he even called out Carlos (Felipe) ‘Boi’ now, but I believe that it would be a good fight for December.

“He left the UFC and came back and is now on a four-fight winning streak, and I believe that a win over this guy would get me in the top-15.”