As Michael Chandler gets set for what potentially could be a life-altering opportunity with the UFC, it’s worth taking a minute to remember he was half of the tandem who helped legitimize Bellator in the mixed martial arts world.

The promotion debuted in 2009, right around the time the bubble from the UFC-driven boom years was bursting. The IFL and Elite XC burned through millions of dollars and went out of business. As did Affliction, except it burned more money faster. The UFC had snapped up the WEC and the remnants of PRIDE and the WFA. Strikeforce had a few more memorable years to go but eventually also was devoured by the Zuffa monster.

So the initial reaction to Bellator, roughly, was “Another new company? Good luck with that.”

The promotion struggled to gain traction in a burned-out landscape, right up until the night of Nov. 19, 2011. That’s when, head to head with a legendary UFC fight in “Shogun” Rua vs. Dan Henderson, Chandler and Eddie Alvarez put on a war for the ages at Bellator 58, as Chandler submitted Alvarez in the fourth round to claim the Bellator lightweight title.

This marked Bellator’s first “Oh my god, you have to see this fight” moment. Two years later, Chandler and Alvarez rematched. Bellator had been a basic cable entity to this point, but interest was such that Chandler-Alvarez 2 became the promotion’s first pay-per-view event. Again, the duo engaged in a tremendous battle, this one going all five rounds and Alvarez regaining the title by split decision in a bout that could’ve gone either way.

Chandler and Alvarez, quite simply, made Bellator.

Video: Behind the scenes of Michael Chandler’s knockout of Benson Henderson at Bellator 243

While their first two fights cried out for a trilogy, Alvarez left for the UFC and eventually won the lightweight title, which for a large percentage of the MMA fan base means validation of one’s career. And while the hardcores have long understood Chandler to be one of the sport’s premiere talents, now he finally has the chance for the same mainstream recognition.

UFC president Dana White announced Thursday that the 34-year old Chandler has signed a contract with the company and will fly to Yas Island, Abu Dhabi to serve as the backup in case either UFC lightweight champion Khabib Nurmagomedov or interim titleholder Justin Gaethje has to drop out of their Oct. 24 main event.

White’s come under criticism just this week (including in this corner) for how he’s handled some of the biggest names in the lightweight division, but give him credit for this: He’s not letting the fact that the fighter most closely associated with the lightweight division in the sport’s second-biggest promotion could swoop in at the last minute, against one of his most popular draws regardless if it’s Nurmagomedov or Gaethje, and claim UFC gold in his first fight with the company. In the age of COVID-19, fight bookings are more precarious than ever, and there’s a real chance Chandler slides into that main event slot.

And there’s this, too: If anyone has earned such an opportunity, particularly during a time in which Tony Ferguson and Dustin Poirier have signaled they really want to fight each other, it’s Chandler. 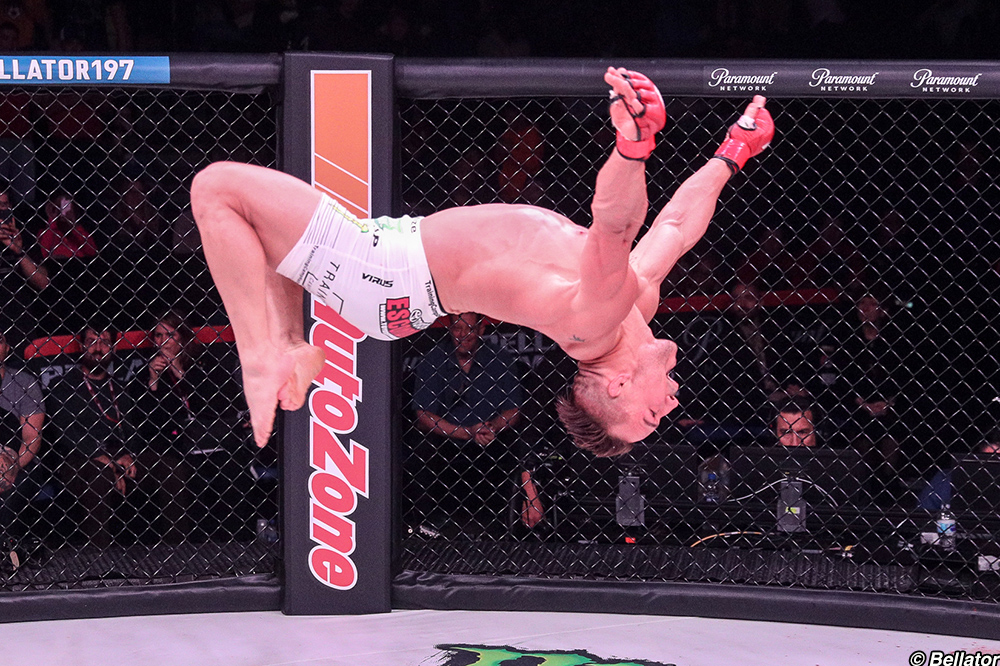 Michael Chandler spent nearly a decade as the face of Bellator.

In the past five years, Chandler’s only losses were because of an absolute fluke injury against Brent Primus, which was easily avenged in a rematch, and a loss to current Bellator champ-champ Patricio Freiere, who would be right in the mix at the top of both lightweight and featherweight if he were to also jump ship.

In Chandler’s most recent performance, the three-time Bellator champ delivered a sizzling first-round knockout of former UFC champ Benson Henderson. Has Henderson lost a step since his peak? Yes. But Chandler’s first win over Henderson in 2016 was a five-round split decision, and he capably demonstrated his ability to adjust on the fly.

That fight was the last on Chandler’s Bellator contract. He had been with the company since 2010, and along the way set company records for wins (18), finishes (13) and title fights (11).

Chandler could have re-signed with Bellator and comfortably finished his career coasting on his laurels as the greatest fighter in the promotion’s history. It doesn’t take a psychology degree to understand that Chandler didn’t want to retire with a UFC “what if” hanging over his head.

Now he’s got that opportunity while he’s still in his prime. And possibly the opportunity to immediately step in and fight for the championship in one of the biggest pay-per-views of the year.

He might succeed, he might fail, but never let it be said that Michael Chandler didn’t go for it.