When the Bellator matchmakers started brainstorming their potential fight card for the first major MMA event in Paris, it didn’t take them long to secure Michael Page’s name on the bout sheet.

The flashy Brit has been a consistent provider of highlight-reel moments for the promotion over the years, and the welterweight contender said he’s excited to be a part of MMA history when he competes in the first main event bout on the dual-card Bellator event at Accor Arena Saturday night.

Speaking to reporters ahead of his Bellator 248 main event bout with Ross Houston, Page (17-1 MMA, 13-1 BMMA) said the historical significance of the event only serves to motivate him further ahead of fight night.

“It’s great. It just makes it that much more of an occasion, coming back after all this COVID-19 madness that’s still ongoing right now. Having sports back is a great thing, so it already feels like a bit of an occasion,” he said. “Then, to add being an historic event, because it’s the first time France has opened the doors to MMA, just gets me that much more excited, so I’m happy.”

Page will take on undefeated former Cage Warriors welterweight champion Houston (8-0 MMA, 0-0 BMMA) and said that, while he can’t give an accurate assessment of how tough his opponent will be on fight night, he does respect his opposite number’s skills.

“I don’t even believe I would be matched up with Ross Houston if it wasn’t for the situation that we’re actually in at the moment. I’m unable to get to the States (and) a lot of the American fighters are unable to get here, which is why we have to find credible opponents in Europe, and he definitely is a credible opponent. He has achieved something I haven’t achieved – a world title in MMA – so I have to give him his dues. He’s also undefeated, and I’ve got to change that. It’s a hard thing to change when someone’s used to winning all the time. It’s a tough fight and I’m looking forward to the challenge.”

Bellator 248 and Bellator Europe 10: Make your predictions for Michael Page vs. Ross Houston

Houston may have a respected name in Europe, but he’s not a household name in the United States and the presence of a relatively new name alongside Page on the fight card has led some casual fans to suggest that the Englishman has been handed a “can” opponent.

“It’s a bit of an unfortunate side effect of my style,” explained Page. “I’ve said this from a long time ago, because if I beat all of the exact same people that I’ve beaten so far, but in a very different, more generic style – a bit more of a back and forward, I get hit a couple of times, I get rocked and I come back – people would just label me, ‘This guy’s a great fighter. He’s tough.’ I wouldn’t have that ‘he’s fighting cans’ appeal.

“Because of my style, I make really good opponents look very mediocre, which is great entertainment-wise. It’s (also) great for me as a fighter, because I’m able to keep really safe and still be devastating. But that’s the side effect to that, where people just don’t believe in the opponents that I have unless they’re (big) name opponents. From my first MMA fight, people were trying to match me up with Anderson Silva and ‘GSP’ and I’d barely done six months of jiu-jitsu, so that just shows the effect of my style.”

Page is focused on defeating Houston in Paris on Saturday, but his main goal is to take on reigning welterweight champion Douglas Lima in a rematch of their clash at Bellator 221. Lima stunned “MVP” on that occasion to hand the Englishman his only career defeat, but Page said he is determined to run things back with the Brazilian, at any weight. 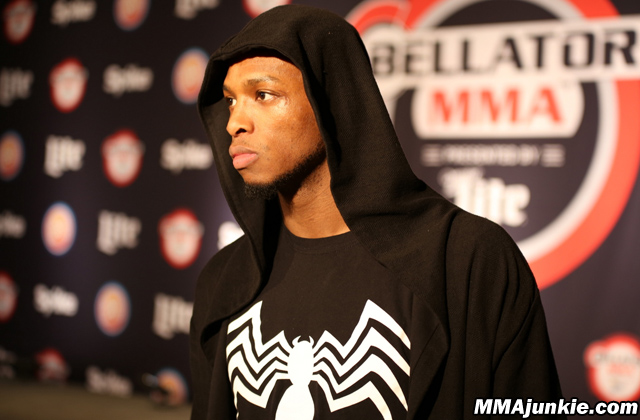