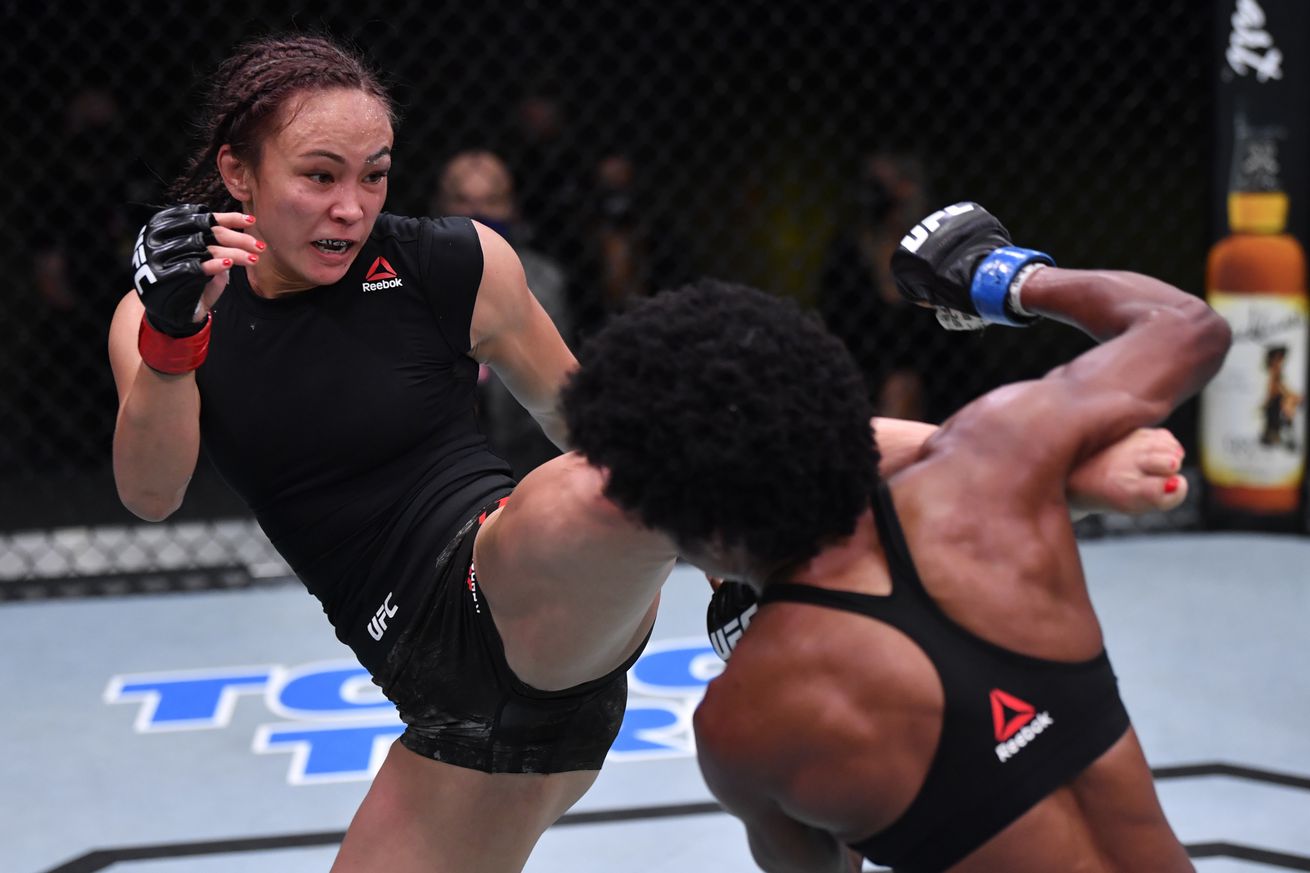 Michelle Waterson is still learning new tricks as she nears the end of her 13th year as a pro fighter.

Not only did Waterson score a win over Angela Hill in the UFC Vegas 10 main event last month, she was also promoted to a brown belt in jiu-jitsu immediately afterwards. And she attributes much of her success to the work she’s been putting in not just with her coaches, but with a sports psychologist.

“I think as a fighter when you start getting closer to the top you can allow the pressure of getting there overcome you,” Waterson told MMA Fighting on the What the Heck show. “There’s so many things that go into a fight. There’s the outside noise, there’s the politics of it, there’s the rankings of it, and then there’s the actual fight. There’s the mental side of the fight and there’s the physical side of the fight. Then inside of the physical there’s standup, ground, wrestling, jiu-jitsu, cage work, there’s all these things and you can just become overwhelmed with everything and the trajectory of where your career is going to go if you go left or right. And I decided to just leave that all behind, go in there, and be in the moment.

“Me and my sports psychologist really worked on that. ‘What is it that you want to feel when you step inside that octagon? What is it that you’re after?’ I realized it wasn’t necessarily the win, it was the idea that I was able to implement the things that I’ve learned over two decades in a fight. That’s when I really am able to get in the zone and shine is when I can go in there and be a complete martial artist. And like you said, just punch somebody in the face (laughs).”

That Sept. 12 clash with Hill marked Waterson’s 26th MMA fight, her 10th for the UFC. Though she’s experienced both streaks and skids in her fighting career, she’s currently maintaining a strong position in the contenders’ rankings with four wins in her previous six fights.

Even the setbacks Waterson has suffered recently—consecutive decision losses to Carla Esparza and Joanna Jedrzejczyk—have been a major constructive point for her and her sports psychologist.

“That’s where you grow the most,” Waterson said. “We kept working at it and just like the physical side of anything you put into play, anything you’re working on implementing, it takes time and it takes practice and it takes consistency. We really needed to see if these things were going to work when we were low, when we were down, how could we get out of these ruts that we were in.”

Asked about the importance of visualization, Waterson mentioned world famous combat sports championships like boxing legend Mike Tyson, current UFC middleweight champion Israel Adesanya, and former two-division UFC champion Conor McGregor as examples of how one must fully immerse themselves in what they expect to happen during fight week to be successful.

“When you see Mike Tyson talking about how he’s gonna walk into the ring, you don’t just see him talk about it,” Waterson said. “He takes you into his world and shows you, allows you to feel, allows you to see, allows you to smell everything that he’s thinking. When Israel Adesanya is talking about what he’s gonna do, he does the same thing. When Conor McGregor is visualizing what he’s going to do to become a world champion in two different divisions, he’s not just visualizing it. He’s living it.

When Waterson was finished going 25 minutes with Hill, the two fighters had put together one of the year’s best fights, which may have defied expectations given that they were elevated to the headlining spot only after the originally scheduled main event between Glover Teixeira and Thiago Santos was postponed when Teixeira tested positive for COVID-19.

Whatever negative chatter there was in the lead-up to the fight, Waterson heard none of it. Just add it to the list of outside factors that she’s learned to ignore at this stage of her career.

“I didn’t know people were thinking that,” Waterson said. “In my mind, I was perceiving it as a blessing in disguise and that’s how I took it, and I took it and I ran with it. I had full confidence that Ang and I would go in there and put on a show. Like I said, the strawweights always do, I don’t know why anybody would think anything different. But I think you become a bit numb to the outside noise as long as I’ve been fighting. If you allow that stuff to get into your head it is a huge distraction and it’s a huge waste of time.”